How to Revolutionize Your Character Motivation

Whether I’ve blown it at work or reacted poorly at home (hypothetically of course), I often need a fresh start. Why? Because I’m human and I have a tendency to get in a rut. Sometimes my ruts are grounded in bad habits or faulty beliefs. Speaking of habits and beliefs, those are also the sources of character motivation in my stories. 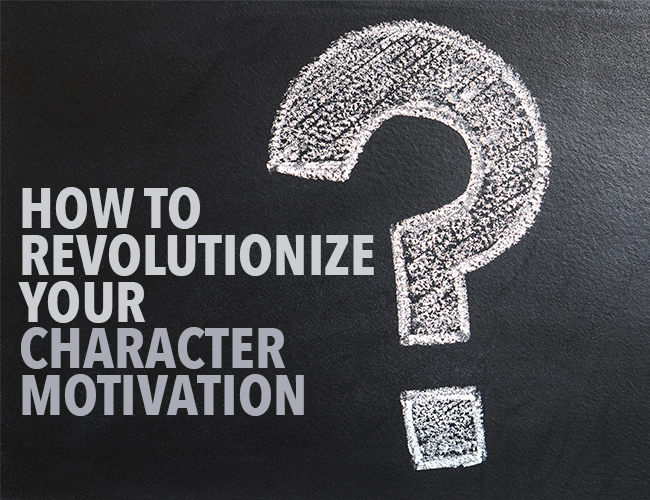 It’s not great for me as a human being, but it’s terrific for fiction. The first step to making a fresh start for me or my characters? Figuring out our default settings.

I recently received the developmental notes on a novel I wrote last summer. One of the biggest problems deals with the main character. I have comments sprinkled through the manuscript such as, “I’m not sure what’s motivating her here” and “Why’d she react that way?”

In a few instances I know why, but in other places? I’m not sure what’s motivating my character other than my need to move her from point A to B.

How the Past Informs the Present

I’m not the kind of writer who revels in completing long, drawn-out character sketches or questionnaires (short or long). I don’t have my students complete them because while it is important to know the character and world, most students struggle to separate the character sketch from the story. It's painful for a reader or writer to wade through six (or sixty!) pages only to find the story actually starts on page seven (or sixty-one).

My writers often have a hard time cutting those first six pages and working the backstory into the action in more natural ways.

The Key: Find the Defining Moments

Instead of a long character analysis, I identify or create the defining moments in a character’s life, and I uncover the memories that the character falls back on in a crisis.

For example, if my character has been betrayed by a close friend, she might be hesitant engaging new people. If my character’s family experienced a horrific house fire, he might be irrational around fire or smoke. (Yes, these are cliche and perhaps a bit obvious, but you get the idea.)

If you are writing a new character, try creating the character from the point where he’s making a fresh start.

Think through why he needs a fresh start—what rut is he in? I bet you can come up with a terrific list of ruts: driving too aggressively, bitterness, resentment, explosive anger, dysfunctional relationships, irrational fear, and so on.

Keep in mind your answers to these questions are not the story. They are the engine that drives your character forward when under pressure. As a bonus, that bad habit or faulty belief will likely hold him back from what he wants, too.

Where to Put Defining Moments

When we first begin writing fiction, we usually dump the backstory at the beginning, because it feels like the reader needs to know it. The result? It confuses the reader and muddies our central conflict.

“
Readers want to see our characters in action, going after a goal and meeting conflict.
Tweet this
Tweet

Where should we introduce those defining moments that motivate our characters? In real life, and in great stories, they reappear exactly when we don’t want them to—in the heat of the moment, when we’re hurt or angry or lost.

Defining moments can be referenced by another character (“You looked just like Mom when you yelled at him”) or in character’s thoughts (He reminded me of the summer in Sicily when I lost…). Memories resurface in sensory experiences like smells or sounds.

Let the tinkle of a wind chime unnerve her or the smell of honeysuckle cause a physical reaction. Ground those moments in the action.

How to Revise Character Motivation

What if you’re revising a character, like I am? I’m starting with the scenes where she reacts to conflict in a strong or unusual way to identify the patterns of behavior.

In my novel, the inciting incident is in a hotel restaurant where the main character is kissed by a stranger in front of a table of her husband’s work spouses. She slaps him in response.

Some characters would laugh it off. Others would shove him away. What prompts her to slap him?

That is what I need to identify and make consistent through the draft. If possible, I want the memory to relate to my theme for maximum impact.

When we interrogate our characters to find their motivation, our stories become stronger reflections of the human experience. Motivation builds resonance with readers.

What is motivating your characters? Do they need a fresh start? Which moments and memories define them? Let us know in the comments.

Choose a character from your work in progress or create a new character based on someone you know with a bad habit or faulty belief. For fifteen minutes, unpack the defining moment that contributed to the habit or belief. It might be a scene from his past or a summary. Share your practice in the comments and encourage each other.