Boring Writing: How to Cut the Boring Parts of Your Story

I had a writing friend ask me last week, “How do you write through the boring parts of a story?” 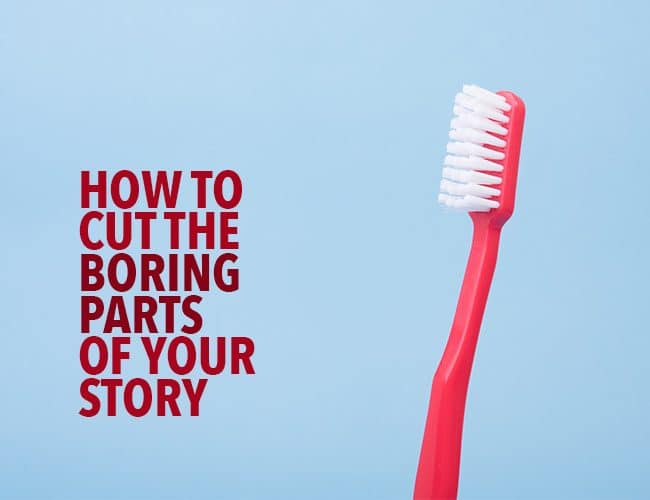 I was flattered he thought I might know. I don’t know how to write through the boring parts except to say this:

Of course, that's all predicated on recognizing boring writing in the first place. Not sure where to start? Here’s some help with finding those parts to cut!

The Most Boring Part of Basketball

My youngest son was writing a narrative for school this week. It was a story about attending a basketball game with my husband a couple years ago. He was frustrated because he said felt it was too long and “nothing was happening.”

“Summarize each paragraph in a sentence,” I said.

He began to stammer through the story:

“First, I got invited to the game by a friend whose dad is a coach. Then I got ready. I told Dad I wanted to get a basketball and have it signed by my favorite player.

“Then we drove to the game. Then at the game, the security guard wouldn’t let us into the signing area because I lost my pass. We watched the game and we drove home.

“When I told my friend about it, he said to bring my ball by his house and his dad would take it to practice to see if anyone would sign it. I waited for days. But I got the signature of every member of the team.”

Can you guess which paragraphs didn’t move his story forward? Where I suggested he make cuts?

“Boring” parts for me include any scenes that don’t move the story forward or reveal character. As a reader, you know what I’m talking about. It’s the lines and scenes you skim.

Boring does not mean devoid of explosions and shocking twists. There are plenty of subtle, quiet scenes that are absolutely necessary for a story to work, depending on the genre.

What you want to do is find the places where nothing is happening on or below the surface.

When my son described his story, I noticed three places where nothing seemed to happen. “Then I got ready,” “we drove to the game,” and “we drove home.”

In my high school writing classes, I call these scenes “slow start-ups” or “inactive transition scenes.” You can cut them and instantly improve your pacing and plot development.

“
The boring parts of a story are the bits that don't move the story forward or reveal character. Cut them.
Tweet this
Tweet

“I got ready,” AKA the Alarm Clock Scene

If your story begins with an alarm clock buzzing, you’re probably starting it too early. I usually don’t want to watch a character brushing his teeth or pulling on his jeans in the morning unless there is something essential I need to know from his routine.

You don’t have long to capture the reader’s attention at the beginning of a story. Start as late as possible and make sure the central story problem comes to light quickly.

Think about the parts where your characters are going through the motions, getting ready. If those scenes aren't pushing the story forward with conflict, you might be able to cut them to speed up the pace.

A few years ago, I realized I spent an inordinate amount of time getting characters from one place to another. I opened and closed doors, drove them up streets, and walked . . . so much walking.

In my son’s story, there were two paragraphs that he summarized as “we drove to the game,” and “we drove home.” I asked him to evaluate the scenes. “Is there any conflict in those paragraphs?” There wasn’t.

“Do those paragraphs show us something new about the characters?” I asked.

He’d found two inactive transitions that were slowing down the story without a good reason. He cut them.

If you find that you absolutely need a scene to transition, make sure you take the time to develop it. Add a revelation about a character or a complication that shows the character’s true motivations or personality.

Fear Not the Scissors

Of course, writing is often a challenge. So often, I want to click away from my document, stand up from my chair, and do something — anything — else besides trying again to solve the problem of a scene that's not working. Much as I would like it to be, this isn't a magic bullet that will make writing the interesting bits of your story easier.

But when a scene isn't working because nothing happens in it, don't be afraid to trim it away. It will make your story shorter and tighter, and it will ensure your readers stay engaged and excited from start to finish, with no boring bumps in the way.

How do you write through or cut boring writing? Let us know in the comments.

My son wanted a signed basketball, and a few days after the game, he got one. For today's practice, think of something you've wanted recently. Maybe it's a trophy, or a piece of pie, or an extra hour of sleep.

Now, reread your summary. What are the boring parts of the story? Cut them out so the story stays focused on the interesting bits.

Take fifteen minutes to write. If you still have time after trimming your summary, start fleshing out your summary into a full story.

When you're done, share your original summary and your boring-parts-cut version in the comments below. Be sure to leave feedback for your fellow writers, too!