Character Personality: How to Discover Who Your Character Really Is

Have you ever written a scene that didn’t feel authentic or sit right with you? One very possible reason for such a scene is that your character did not act in accordance with their nature. As writers, we sometimes hit a fallback position where we have our character do what we would do rather than acting … in character. We have to remember to write from the character's personality rather than our own. 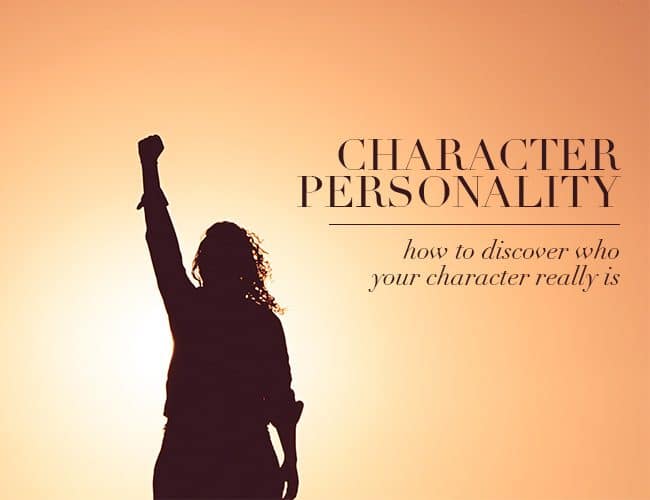 I am not a proponent of detailed character sketches—believing, instead, that the character reveals herself to the writer as the story unfolds. However, as we get to know the character we’re writing, it’s important to understand the essentials of her personality. By doing so, we make it easier to understand and portray the shifts that make up the character arc.

On a scale of one to ten…

Start with a sense of where your character falls on a sliding scale of character personality extremes. Here are some examples of what I mean:

Go ahead and put an X on the dotted line where your character falls as the story starts and another X to represent where he ends up at the finale. Some X’s will be right on top of each other because there’s been little or no change. But, in the case of your protagonist, one or more lines should show a dramatic difference. That’s your character arc.

Inside the conflict zone

Without conflict, there is no story. In fact, stories exist to teach us how to deal with conflict while giving us the opportunity to work out a virtual solution inside our minds. Most of this occurs on a subconscious level, taking place while we think we’re just enjoying a good read or watching a good movie. But it’s all about the conflict.

As humans, we’re motivated mainly by two desires—to gain pleasure and avoid pain. In terms of writing, we usually ask: what does the character want and what does the character fear? In nearly all cases, the stronger motivating force comes from avoiding pain and fear. That brings us to the crisis point where crucial decisions must be made.

“
We reveal who we are by the choices we make. When times get tough, what decisions will your character make?
Tweet this
Tweet

It’s not always a choice between bad and good

In a compelling story, the decisions are not often cut and dried or easy to make. Usually, your character must choose the best from a series of bad options or else choose between two good options, each with a penalty attached. Shawn Coyne in The Story Grid calls these “the best bad choice” and the “choice between irreconcilable goods.”

Inside the conflict zone, there are positives and negatives. From a distance, the pluses look attractive. We move toward them, life is good. Until we approach the crisis point when the minuses rear their ugly heads and scare us toward another option. Which looks good until we near the moment of truth, and so forth.

In the end, what happens next comes down to character, to your character's personality.

Be true to your character

I’ll share a personal example. I love music and I am a classically trained pianist. But I also struggle with severe performance anxiety. I’m often invited to perform for various causes and venues and it always sounds like a good idea at the time, so I’ll say yes. And I look forward to it.

Until the date draws nigh, at which point I start to freak out and look for an exit strategy. However, on a sliding scale between “Keeps commitments . . . . . . . . . . . . Flakes out,” I’m hard-wired to follow-through. It’s my nature, regrettable as that sometimes is. So I work through the panic and perform.

Your character must also react to pressure in a way that is true to his own nature. Over the course of the story, those pressures may shape your character, bringing about a change—an arc—and if done right, a satisfying conclusion to the story.

What would your character do? If the answer doesn’t fit where you need the story to go, you can probably add stuff to the equation to make it work out in your favor. Just make sure the added elements will act on your character’s nature in an authentic way, leading to believable behavior.

Remember, fear is a great motivator. Consider the teenager whose friends want her to sneak down the trellis outside her bedroom window and join them for some late night fun. But as she starts to climb, the trellis threatens to tear away from the wall. Her fear drives her back into the window and she tells her friends to go on without her.

But if the house caught on fire and the stairway was a mass of flames spreading quickly to her bedroom, fear will motivate her to climb down that same trellis with no thought of turning back.

As writers, we have all kinds of freedom to load the equation as we need to so that our characters behave in a reasonable and genuine manner, and in accordance with their nature. As you explore your character's personality, consider what pressures you could place on them to greatest effect.

Tell the character’s story—not your own

Most of us are good at starting a story. But there comes that point when the going gets tough and it’s hard to push through. That’s when it’s most tempting to fall back on what we, as individuals, would do. But stay true to your character's personality—it’s her story your telling, not your own.

Unless, of course, it is your own, but that’s a subject for another article!

How about you? Do you ever have trouble choosing an appropriate behavior for your character? Tell us about it in the comments section.

Today, let's explore personality. Choose a character from your work in progress, or make one up.

Take five minutes to develop a series of sliding scales for personality extremes. You can use the same one I did, or create your own. Place X’s to reflect your character’s nature.

Then choose one of the following prompts and write a scene for that character. If you’re using your own character, substitute their name for the name in the prompt.

Write for ten minutes. When you are finished, post your work in the comments section, and be sure to leave feedback for your fellow writers!