Character Sketch Template: How to Sketch Characters in Scrivener

Are you looking for a character sketch template that will make your character building easier and more fun?

Scrivener has an amazing character sketch  tool that you can use to develop better characters. 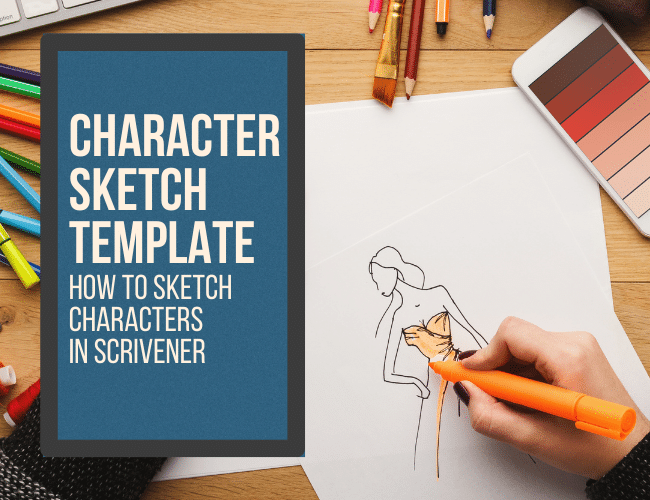 In this article, you'll learn how to sketch a fictional character and cast that will make you proud. Read on for a hands-on walkthrough of how to use Scrivener to create characters, from character profiles to their physical descriptions, and then some.

Characters Can Make Your Book. Here's How to Create Them

Nothing is born in a vacuum. Characters don’t emerge fully formed. Character development is a process of getting to know your characters and working to make them come to life. They’re developed through character sketches, through the writing process itself, through lots feedback, and diligent revision.

When you're going through the character development process, it's helpful to have some tools at your disposal, and one of the most helpful tools for writers, especially when it comes to working on your characters, is Scrivener.

What is a character sketch, what is Scrivener, and how can it help you create compelling characters? Read on to learn more!

Full disclosure: some of the links to Scrivener below are affiliate links. That means if you order Scrivener and use it to write your books, I will earn a few dollars to help me keep writing. That being said, this didn't affect my opinion of Scrivener (which I personally use in my own writing).

Scrivener is a writing program and word processor designed specifically by writers, for writers. If you're working on a book, I've found that Microsoft Word and other word processors just don't cut it.

Having a tool like Scrivener that's designed specifically for books can save you hundreds of hours and help you write a better book.

If you're interested in learning more about Scrivener, read our Scrivener review here.

Ready to purchase Scrivener now? You can get Scrivener for Mac, PC, or iOS here: Download Scrivener here »

What Is a Character Sketch?

You can type out their whole backstory, or just the parts of the timeline that inform your character’s identity. Their inner and external conflicts will be crucial to your story, so be sure to include those, too.

Most importantly, use character sketches as a tool to discover your characters’ key motivations and goals, because those are the engine that drives your story forward.

“
Creating characters has never been easier with Scrivener's character sketch template sheets. Learn how to use them in this article.
Tweet this
Tweet

How to Use Template Sheets in Scrivener

Scrivener has a template sheets function that makes building out character sketches easy. If you started using one of their document templates, like the novel template that comes with Scrivener, there should already be a Template Sheets folder in the project document that looks like the screenshot to the right.

If not, you can make a Template Sheets folder by creating a new folder in the Binder (the lefthand column), and then from the top menu selecting Project > Set Selection as Templates Folder.

Once you have the folder, you can add as many templates as you like!

One more note before we get started: I reference Scrivener’s features and include screenshots of the software, but you can still use these methods without Scrivener. Simply create a separate text file for each character and keep them in a folder named “My Story—Character Sketches.” If you're interested in Scrivener, Joe reviewed it here.

Fortunately, we live in a digital age and Scrivener’s digital corkboard interface gives us the power of notecards in a way that allows us to drill down from the card view into the character sketch itself.

The notecard system is well documented and has been made famous by a dead author, a living author, Writer’s Digest, and teenagers writing research papers everywhere. Scrivener simply digitizes this time-tested method.

In the screenshot below, you’ll see that I have several characters in view. They’ve all been generated from the Character Sketch template sheet we created previously.

What’s great about this is that you have a card for each character, with optional visuals or text description. 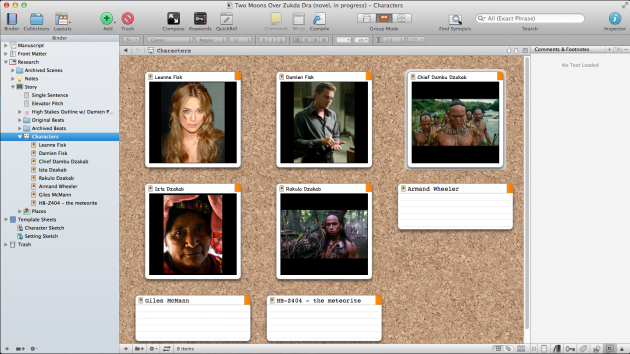 I go for visuals out of the gate, as it helps me ground my character in an image. Having a visual on hand makes writing about them easier, at first, because the photos jog my imagination. Once I’m really entrenched and know my characters (i.e. about twenty-five percent of the way through the first draft), I don’t need to look at the visuals at all.

You'll notice that some characters don't have photos—I added those characters during the story and didn't bother going back to find photos for them.

That’s okay. One of the most important things to remember about your planning or pre-production phase (to borrow a film term), including character sketches, is that none of it is set in stone.

Your story will evolve, and so will your characters.

For the images I’ve picked a few actors and photos I found on Google Images.

To add a photo to a Character Sketch in Scrivener, click on the character’s card, open the Notes column on the righthand side, and drag your image into the image area where the instructions are:

To insert a photo inline with the text, first click where you want the photo, and then go to  Edit > Insert > Image from File…

Here’s a screenshot of an individual sketch of one of my characters: 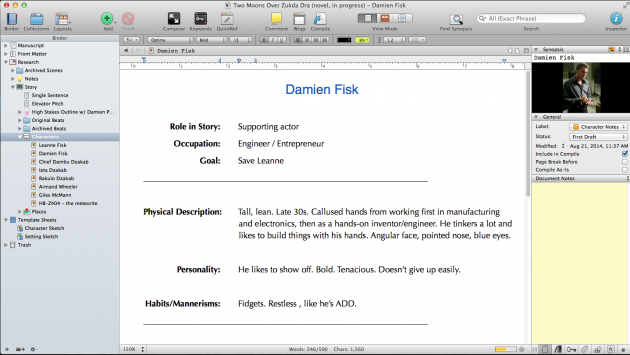 This sketch was created using the character sketch template that comes with Scrivener. I’ve since abandoned Scrivener’s defaults in favor of my own compilation, which follows.

Personally, I find Scrivener's default sketch sheets superficial. When sketching characters, I like less structure, and less prescriptive fields around the character's physical appearance and personality.

If you're just starting out and you don’t have a character sketch template, here’s one I put together based on my own experimentation.

This is what my character sketch template looks like in Scrivener: 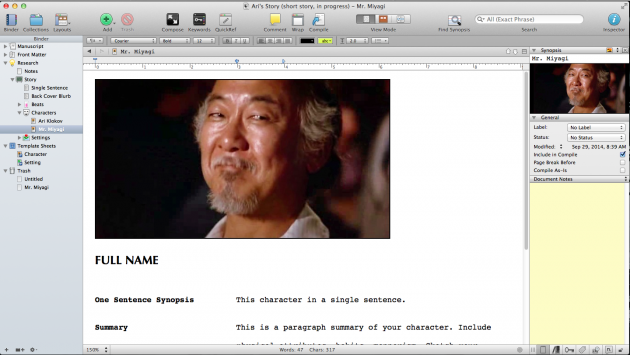 And here's the full text, which you can feel free to use or modify as you see fit:

One Sentence Synopsis: This character in a single sentence.

Motivations & Goals: What do they want?

Conflicts: What makes them human?

Narrative: What happens to them in the story? What else is important?

There are practical reasons to do character sketches. For one, developing characters is a process. Paving the way with character sketches and setting sketches, are a great way to give the gel of the story time and space to set.

Yes, they're extra work, and yes they can be difficult. But that's part of the process.

If you feel like you really know the character and can write the story, run through this checklist to make sure before you move on:

If you can answer all of these questions with confidence, congratulations, you know your cast and can throw them together in your story to see how they respond.

Ready to Develop Your Characters With Scrivener?

Now that you've learned how to do character development in Scrivener, put it to use!

You can get the Mac, PC, and iOS version and start creating your character sketches in Scrivener now:

Download Scrivener here »
Or if you're still wondering if Scrivener can help you finish your books, read our Scrivener review here.

Then, continue to the practice section for a writing exercise to help you get started.

Does your method for sketching characters line up with how I do things? What are your tricks for helping bring your characters to life? Share in the comments section.

Here's a creative writing prompt to help you get started with character sketches.

Take fifteen minutes to sketch one character. If you have a work in progress, choose a character from that story. Or, pick one of the characters below:

Naming them is just the beginning. Don’t be afraid to get personal with the characters you create. When you're finished, share a few paragraphs about your character in the practice box below. Then, be sure to leave feedback for three of your fellow writers on their characters. We'd love to see who you come up with! 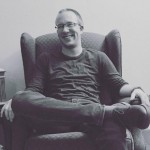 Matt Herron is the author of Scrivener Superpowers: How to Use Cutting-Edge Software to Energize Your Creative Writing Practice. He has a degree in English Literature, a dog named Elsa, and an adrenaline addiction sated by rock climbing and travel. The best way to get in touch with him is on Twitter @mgherron.