How to Write a Story 101: Conflict

You desperately want to write a story. You carry a pad of paper with you in case you get an idea. You can't decide if your main character should have short hair or long hair. But for now, put aside what your character looks like and think about what they want.

In this post, we're going to look at how to write a story by focusing on one of the most important elements of any story: conflict. 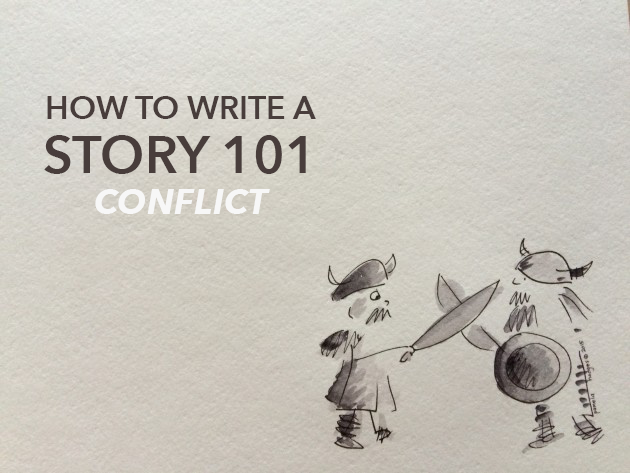 Every story has to have conflict. A story without conflict is boring. I don't want to read about how someone has it all together.

How do you write a good conflict of a story? What is conflict, anyway? And why do you even need it in your story? You probably hate fighting. So why would you want to write about it?

“
Conflict brings together two opposing forces and then develops and resolves the struggles between those two forces.
Tweet this
Tweet

What Do the Protagonist and Antagonist Have to Do With Conflict?

Hint: If you can remember the meaning of the prefix it might help you remember what the two words mean: Pro means in favor of. Anti means against.

How to Write a Story: 2 Different Models

Good stories settle into two different models: the Accomplishment Story and the Decision Story. Depending on the type of story you're telling, the conflict in your story may look very different.

In an Accomplishment Story, the protagonist is trying to achieve some goal against great opposition.

Perhaps you are trying to convince your husband to let you rip up the carpet in the formal living room and turn it into a painting studio. Your husband is the antagonist; he is against you. You are the protagonist struggling to get your painting studio.

(P.S. I ripped up the carpet and won the conflict.)

In a Decision Story, the protagonist has a choice between two things, two courses of action, two sets of values.

Should the protagonist let her hair grow so she can donate it to make wigs for children with cancer, or should she shave off all of her hair and pay the fifteen dollars the hair salon was demanding when they shaved her neck?

That's an example of a Decision Story.

If you want to know how to write a story that sings, you need to focus on writing better conflict. These four storytelling principles will help.

1. Conflict must be of obvious importance to the characters involved. If your conflict is whether or not the protagonist eats green beans or broccoli for dinner, make sure it is obvious why this is important to the character.

2. The two opposing forces much be equal in strength. The conflict is developed and there will be suspense until the end. This kind of story drives me nuts (in a good way—mostly). I hate how you can never guess who will win. I want to know! Sometimes . . . well, most of the time . . . okay, all of the time, I peak ahead to see who wins the conflict. Then I go back and slowly finish the book.

3. Unity. Everything—conflict, character, theme, point of view—is functional, and related to the story's basic purpose. The conflict is logical in development.

4. Plausibility. Characters act and react to familiar principles of human behavior. The resolution of conflict must adhere to basic facts of existence. The people in your story can't regrow a leg if it gets cut off. (Unless your story's world follows its own rules, in which case you must go back to Principle #3 and make sure there's unity to those rules.)

How to Write a Story That Breaks the Rules

If you want to add conflict that does not follow the principles or models above, don't feel like you have to follow all of the rules. Just because you read something in a “textbook” (or writing blog) doesn't mean it is the only way to write.

Principles are just that, principles. They are not laws. Principles are not the double line in the middle of the highway that you cannot legally cross.

If you break a rule about storytelling you won't go to jail or get a traffic ticket. What could happen? Sure, your story might not make sense, but on the other hand, you may have written a story that is convincing and effective without following the principles.

Writing a story is like making homemade soup: you follow the recipe, do everything you're “supposed” to do, and then add a dash of your own spices and ingredients.

What will your story taste like when it's finished?

Do you tend to write Accomplishment Stories or Decision Stories—or something else entirely? Let us know in the comments section.

Write a story using one of the patterns of conflict mentioned above: an Accomplishment Story or a Decision Story (I hate being told what to do, so I wanted to let you have a choice). Write your story for fifteen minutes.

When your time is up, please post your practice in the comments section. I look forward to reading your stories.
xo
Pamela
​