How to Write a Journal: 6 Tips

Do you keep a journal? I do. It is how I remember the travels I've taken, the life experiences I've enjoyed, and the litter boxes I've cleaned. 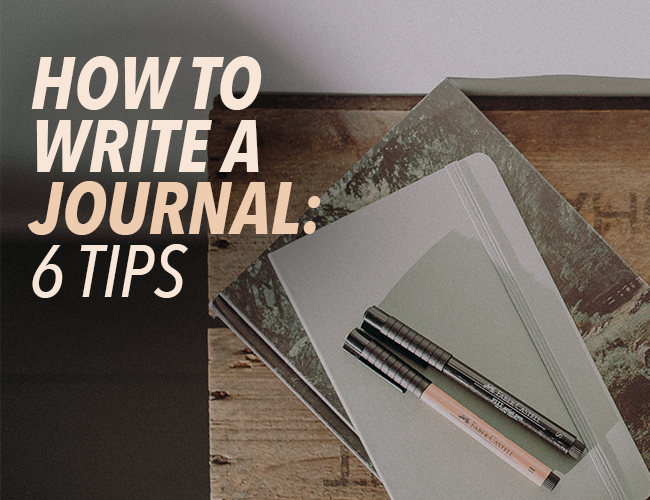 We are writers, so it is even more helpful for us to start a journaling habit, such as the morning pages writer Julia Cameron encourages. Not sure yet? Let me share some tips from my journaling experience on how to write a journal.

4 Advantages of Keeping a Journal

There are many reasons why it is a good idea to keep a journal. I want to share four big reasons this daily habit may help you with your writing process and develop your writing skills.

When I traveled to Europe in 1978, I kept a journal of my daily life. I have notes from the trip to Greece where I wiped out on a moped, weeded sugar beets on Kibbutz Reshafim in Israel, and hitchhiked through occupied territory in the south of Israel.

There were several details of my trip that I had completely forgotten until I reread my personal journals.

December 16th, 1978
Walking to the orchard from the kibbutz the sun was so hot I stopped and just listened to the silence. (Walking I could hear stones crunch) I had to take off my sweater the sun was so intense.

Recording the details of your life can enrich your stories. One year for The Spring Writing Contest at The Write Practice, I wrote a story about when the IRS called me to say I owed money.

In my first draft, I wrote that the amount they said I owed was $638 dollars. After I had completed the first draft I went back to the notes I had written in my journal, and the correct amount was over six thousand dollars: $6,846.48 to be exact. Well, maybe there are some things we don't want to remember.

Thankfully, I didn't send the money. It wasn't the “real” IRS. But it was even better than a writing prompt for a story idea.

Keeping a journal can help you find old friends. One of the women I met on November 26th, 1978, wrote down her address. I found her on Facebook and just sent her a message. (Social media and Google can also help, but the journal did remind me of her name.)

We'll see if she responds to my Facebook message. It has been almost forty years since she lent me a pair of gloves when I scraped my hand on the pavement when I fell off my moped.

When you keep thoughts in your head it can be hard to know how you think and feel. Writing down how you feel will help you process your emotions, as feelings become words, which can be then be edited.

“
“Writing is the only way I have to explain my own life to myself.” ―Pat Conroy
Tweet this
Tweet

That expressive writing can be therapeutic, but it can also help you flesh out characters later.

When you are dead and a famous writer, your journals will give your readers insight into how you thought and what your life was like.

You may never sell more than one hundred copies of your book, you may never publish your writing, or your journals may only be read by the mice that crawl through your basement. Or your journals will be read by zombies after the zombie apocalypse, sharing insight into your life and daily routines.

If you don't want anyone to read your journal, keep it in a locked box and swallow the key. (Please don't really swallow the key. It would be unpleasant to have to find it again, and you might choke.) Put the key in a safe spot, and then remember where you put it.

6 Tips for How to Write a Journal

Now you know why journaling can be helpful. But how should you journal? It is very personal, and you should do what works best for you. But I will give you some tips to help you get started.

1. Choose your kind of journal

A book, where you write with a pen or pencil on paper: Write in a book that is not so pretty you are afraid to write in it. Keep the size small enough you don't mind carrying it in your messenger bag, and big enough you can read your handwriting.

Do not try journaling at night if the only paper you have on your bedside table is a bandaid. The next morning I couldn't read my writing on the bandaid, and the idea I wanted to journal was lost.

The disadvantage to a paper journal is if you lose the journal and you didn’t make a copy of it, you have lost all of the writing. But either way, the journal writing helps you pay attention and record the moments of everyday life that will fade with time otherwise.

Software: There are several software applications on the market you can use to keep a digital journal. Be sure they sync to the cloud, as you don’t want to lose your entries because you fry your computer's hard-drive.

Journey and Day One can add photographs and text and export all of your entries into a PDF. You can also journal in Google Docs, Microsoft Word, or Scrivener and save your files to a cloud-based program that will keep your files safe if you lose your computer or pour water on your keyboard.

You think you will remember when it happened, but without a written date, you might forget. Make it a part of your journal writing routine to date the entry.

The journal is a record of how you felt and what you did. Telling the truth will make you a reliable storyteller.

If you haven’t cleaned the seven litter boxes for a week, don’t write that you clean them every day simply because you want your readers one hundred years from now to think you had good habits.

The beauty of journal writing is that you can record things honestly for yourself that you might not otherwise record or share.

Record details like the time, location, who you were with, and what you were wearing. Details will help bring the memory alive when you record using your five senses.

To this day, if I smell a certain kind of Japanese soup, I can remember vividly the day I flew to Korea to renew my Japanese visa, only to discover the Japanese embassy was closed for a traditional Japanese holiday.

5. Write down what you felt

What you were thinking? Were you mad? Sad? Happy? Write down why.

A journal entry doesn’t have to be three pages long. It can be a few words that describe what happened, a few sentences about the highlight of your day, or it can be a short description of an event from your day, where you describe details to help you remember what happened. What time of day was it? What sound do you remember?

Your journal entry might be a drawing, a poem, or a list of words or cities you drove through. It is your journal, and you have the freedom to be creative.

You can use journal writing prompts or simply tap into a memory that floats into your mind.

There is no right or wrong time to write in a journal. Write when you will remember to do it. Do you always brush your teeth before you go to bed? Have writing in your journal be part of your bedtime routine. Perhaps put it on your bedside table, or beside your hammock, or on the floor beside your futon.

If you are a morning person, consider keeping your journal on the table where you drink your morning coffee, tea, water, milk, or orange juice.

These are only suggestions. You don’t have to write down your feelings or why you felt a certain way. I hate being told what to do. Even if it is a good idea.

Keep a journal if you want to. And if you think writing in a journal is stupid, don’t keep one. You might have written all day on your novel, and then some writer with six cats and seven litter boxes wants you to keep a journal.

Do you write in a journal? Do you think writing in a journal is a good idea for a writer, or a bad idea? Please tell us why in the comments.

Write for fifteen minutes about some aspect of your day as though you were writing in a journal. Your journal entry might be a drawing, a poem, a list of words, or a list of cities you drove through.

Please share your writing in the practice box below and leave feedback on someone else’s practice today. We learn by writing and by reading.