Contractions in Writing: When To Use and When To Avoid These Conversational Words

If you've ever written an essay or research paper, you've probably been told not to use contractions. However, what about contractions in writing? When you're writing a book, can you use them? Does this differ in academic writing and scholarly writing? 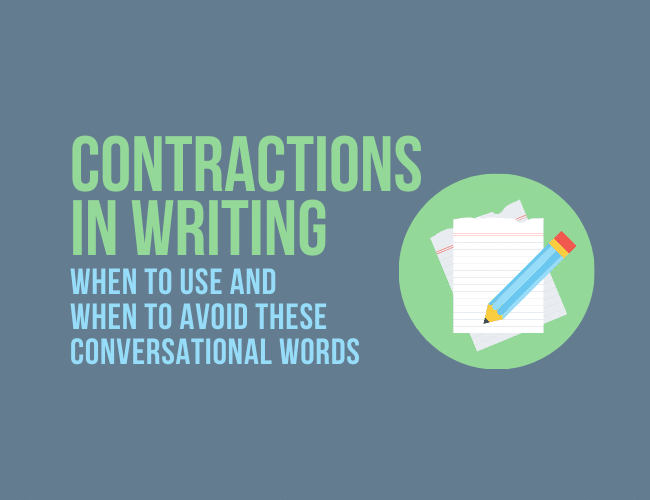 Contractions are a type of informal writing, and yet, they sound far more natural in conversations or narrative driving a fiction book.

Knowing how to use contractions is an important grammar rule. And when you know how to use them properly—and when to ignore them—you'll probably write a better story.

A contraction is the shortened form of a word. It combines two words—almost always a noun with a verb—linked with an apostrophe into one, shortened word.

However, if you think contractions are a modern invention, proof that the English language is going to the dogs, you couldn't be more wrong.

A Brief History of Contractions

Contractions have been around for a very long time—in English, as far back as the creation of the language itself, when the Angles and Saxons invaded the British Isles and mixed the local Celtic dialects with their Germanic languages (the Germans love contractions and compound words).

Since then, the list of contractions continued to expand, usually brought by invaders or imported during cultural movements. For a full history of contractions, read this excellent article.

Should Contractions Be Used in Writing?

You might think contractions can't be used in the canons of literature, but this conversational approach appears in literary masterpieces, from Beowulf to Moby Dick to Great Expectations to Ulysses to modern bestsellers and more (see examples below).

Most English teachers say contractions should never be used in writing, at least not in formal writing (see here, here, and here).

What are some of the most common contractions? I'm glad you asked:

Unsure about which contractions you're using or should be using or what they mean? To help your narrative carry a conversational tone, you can use the list of commonly used contractions below, complete with the full phrase, and an example sentence.

The following three-word-contractions aren't as common (at least in writing), but they are awesome:

While experts often discourage the use of contractions in formal communication, you'll probably find contractions of verb phrases used in business or casual conversations—or scenes like these in books—since contractions make for an easier, more casual tone.

Let's look at some examples of contractions in literature.

Contractions can be frequently found in literature, both modern and classic.

Here's a list of contractions we found in the literary canon.

It's the Black Sea in a midnight gale.—It's the unnatural combat of the four primal elements.—It's a blasted heath.—It's a Hyperborean winter scene.—It's the breaking-up of the icebound stream of Time.

From the fourth paragraph of Great Expectations by Charles Dickens:

From The Picture of Dorian Gray by Oscar Wilde:

It's absurd to talk of the ignorance of youth.

Twelve. I'm thirteen. No. The chap in the macintosh is thirteen. Death's number. Where the deuce did he pop out of? He wasn't in the chapel, that I'll swear. Silly superstition that about thirteen.

Examples of Contractions in Contemporary Literature

Contemporary literature all but throws out the so-called “rule” not to use contractions in writing. Here are several examples of the way many bestselling and prize-winning authors use contractions.

Shadow had done three years in prison. He was big enough, and looked don’t-[mess]-with-me enough that his biggest problem was killing time.

From the first chapter of The Name of the Wind by Patrick Rothfuss:

They’d been coming to the Waystone every Felling night for months and Kote had never interjected anything of his own before. Not that you could expect anything else, really. He’d only been in town for a year or so.

There’s no accounting, in retrospect, for this lapse in the Harris tradition.

From The Dinner by Herman Koch**:

Unhappiness can’t stand silence—especially not the uneasy silence that settles in when it is all alone.

From the Pulitzer-Prize-winning novel, Wonder Boys, by Michael Chabon:

Over the years I’d surrendered many vices, among them whiskey, cigarettes, and the various non-Newtonian drugs…

**This is an English translation from the original Dutch, but since Dutch is a Germanic language, I think it's safe to assume the original uses contractions.

Should YOU Use Contractions In Your Writing?

If you're like me, you learned not to use contractions in school. In fact, I spoke with a friend who was trained as an elementary school English teacher, and she was taught to actively discourage students from writing with contractions.

Personally, I think the no contractions rule is outdated and actually ignorant of the historical foundations of the English language (again, contractions were in Beowulf, people!).

“
The “no contractions” rule is outdated and ignorant of the foundations of the English language.
Tweet this
Tweet

I will say that if you're writing formal essays in high school, college, and grad school, you should probably avoid contractions, if only so you don't ruin your grade.

Real people use them, and so should you.

How about you? Do you think contractions should be used in writing? Why or why not? Let us know in the comments section.

To get a sense of how weird it is to not use contractions, write a scene using the following prompt without using a single contraction.

Prompt: A couple is on their first date at a trendy restaurant. One is allergic to shellfish, the other can't stand brussel sprouts.

Write for fifteen minutes. When you're finished, post your contraction-less practice in the practice box below. And if you post, be sure to leave feedback for your fellow writers.