Dialogue can make your story. In fact, as Shakespeare knew, you can tell a whole story just through authentic, realistic dialogue. You're probably thinking: “Easier said than done.” 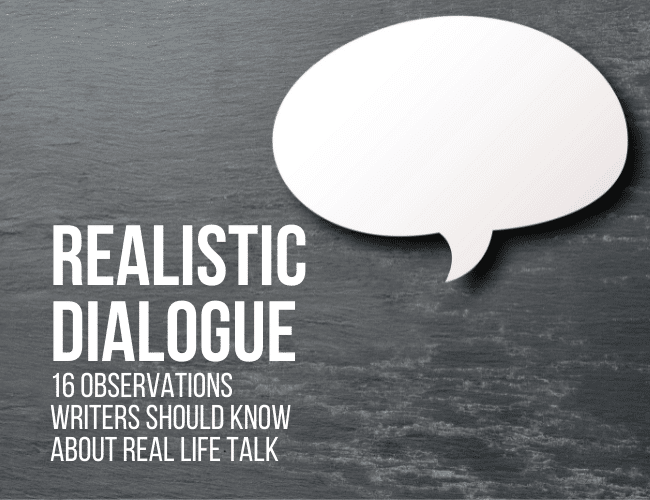 Good stories are about real people, and people in real life love to talk to each other. We are biologically disposed to receive pleasure from conversation.

If you want to write good stories, learn how to write effective dialogue. In this article, you can learn sixteen  dialogue tips that will help you take everyday conversations and turn them into stretches of dialogue that benefit your story.

Dialogue is a Skill

When I first started working seriously on my writing, I would go into coffee shops, eavesdrop on a real life conversation, and write down everything people said. This helped me begin to understand how normal speech worked—but it wasn't enough.

Before I could write lines of dialogue well, I had to ask WHY casual conversations mattered.

Why did this person say this thing? Why did that person reply like that? How did they get on this subject in the first place?

I eavesdropped on conversations for months. It was actually a little creepy. But it taught me so much about how real dialogue works, and how I can take a conversation to inspire natural dialogue and nuanced conversations in my creative writing.

Here are sixteen writing tips I learned about realistic speech patterns, and how to use these to write great dialogue:

As writers, we want our characters to talk about things central to our plot, but humans are weird. Tin real conversations, people don't talk about important things. More often than not, they talk about mundane things like the weather.

To write realistically random dialogue without losing track of your plot, have your characters begin a conversation about something random, and then circle around to the important parts of your plot.

I'm sure some people manage to be nice to each other all the time, but in my experience, the closer you are to someone, the more you bicker.

In fact, bickering can become part of an everyday conversation—as unfortunate as that is.

Bickering rarely turns into full arguments. It's more like a constant buzz of tension.

And while bickering can add tension to your scenes, make sure characters don't bicker just because. Use these conversations in your story to impact the plot or develop a character trait.

I know you want to show off your exquisite writing skills with a long speech, but in normal situations, real people don't like making speeches. They feel uncomfortable when they're the only one talking for a long time.

If you want to write a speech, you need to create some kind of excuse for your character to give the speech. Perhaps they just won an award or their about to go on a long trip or they are dying and want to share their last words.

And if you do need a long speech, make sure you don't just write dialogue alone. While long speeches might work in movies, especially if they're written by a dialogue genius like Aaron Sorkin, books do better to break up long speeches with action.

Real people are hard of hearing. Real people have lawnmowers go by them in the middle of their conversations. Real people say, “What's that? Huh? What did you say? Come again? Sorry, what?”

In your stories, could you create tension by having certain characters ask questions—and maybe even leaving them with unanswered questions.

Dialogue through subtext can be just as powerful as actual dialogue—and getting a character to ask a question can draw a reader's attention to the importance of information.

5. Real People Refuse to Repeat Themselves

Sometimes, when the other person can't hear and says, “Huh? What did you say?” Real people don't repeat themselves. They say, “Nothing. It's not important. Never mind. I'll tell you later. Forget it.”

Sometimes, this leads to bickering.

This technique is especially effective if a character has just said something vulnerable. People will rarely repeat something embarrassing or hurtful or vulgar. You can draw attention to their vulnerability by having them refuse to repeat themselves.

Sometimes, someone will say something like, “Man, it's a beautiful day,” and then wait for the other person to respond. Usually, the other person says, “Yeah, gorgeous, right?” But sometimes the other person doesn't say anything. They just grunt or roll their eyes or stare out the window.

People learn how to do this as teenagers, and it's a good way to show underlying tension.

No one calls you by your first, middle, and last name. So don't use whole names in your dialogue.

Maybe you want to introduce a character by their first and last name early in the book with description, but after that, trust that the reader knows who they are. Especially since other characters won't address them by their formal name unless it's a specific character trait that speaks to the kind of person they are.

Some people are very sensitive to curse words, and I get it. But real people pepper curse words throughout their speech, and if you want to write realistically, you need to think seriously about interjecting an occasional D-word in your dialogue.

A paper needs proper grammar, but it's not uncommon for incomplete sentences to occur in everyday speech. Let the grammar rules go when you're writing dialogue. Seriously.

10. Real People Lose Track of Time and Their Surroundings When They Talk

Real people don't tell the whole truth and nothing but the truth. They don't exactly lie either. They just leave things out and exaggerate to make themselves look better. It might be morally questionable, but it's very human. (And you're writing about humans, aren't you?)

The only time you can write long speeches is when your character is telling a story. People love to tell stories, especially stories about themselves. Sometimes, people will even listen to them.

William Faulkner, Joseph Conrad, the author of Arabian Nights, and many others have exploited this with the literary technique of the Story within a Story. Heart of Darkness is basically one long monologue about an experience a sailor had on his travels (in fact, it's a monologue about a monologue). T

he majority of Arabian Nights is a woman telling stories to her murderous husband. Often, in these situations, the author allows us to forget we are actually reading dialogue. All the speaker tags would get really old.

Every once in a while, though, another character will make an interjection and remind us.

But remember, writing in an accent can be extremely annoying to read, not to mention distracting.

Feel free to experiment with accents, but don't be surprised if your readers don't appreciate it.

14. Real People Talk When No One is Listening

Even when people don't reply, real people keep talking anyway. This is a great way to show annoyance, if your character's lecturing someone, or insecurity, if they can't stand the sound of silence, or even social awkwardness, if they can't pick up on social cues.

Sometimes, real people are too mad or too nervous or too sullen or too much of a teenager to talk. Don't make your characters talk if they don't want it.

Real people talk lessl, which makes it very difficult to get emotion, sentiment, and transformation across through dialogue.

The key is to get your characters into a situation where they're so broken, so destitute, so screwed up that they'll say anything. And perhaps that's why we read fiction anyway, to hear people say exactly what's on their mind.

Write Realistic Dialogue…But Not Too Realistic

Writers need to include realistic dialogue in their stories if they want to make their characters feel real. However, this comes with a small caveat.

If the dialogue becomes too real, it might drag and be filled with conversational content that doesn't do much for the story—other than slow it down.

So when you're writing, make your dialogue sound realistic but not so realistic that it takes away from other story essentials, like character, plot, and pacing.

Overall, include dialogue that benefits the story. Don't include every bit of real life talk just because it sounds like real life. Instead, strip the dull parts from the conversations while preserving what makes the dialogue sound real.

What are your favorite observations about realistic dialogue? Let us know in the comments.

Write a piece of dialogue using the observations above.

Write for fifteen minutes. Afterward, ask yourself whether it sounds like the way real people talk. Is it realistic or are you trying to get your characters to say what you want them to say?

When you're finished, post your practice in the practice box below. And if you post, please give some feedback to a few other writers about whether their dialogue sounds realistic or not.