How to Create a Monster That Terrifies Your Readers

Halloween is right around the corner and I know a lot of you will be writing some spine-chilling stories to celebrate. What’s the best part of a creepy story? A monster. Which means your task is to create a monster that will terrify your readers. 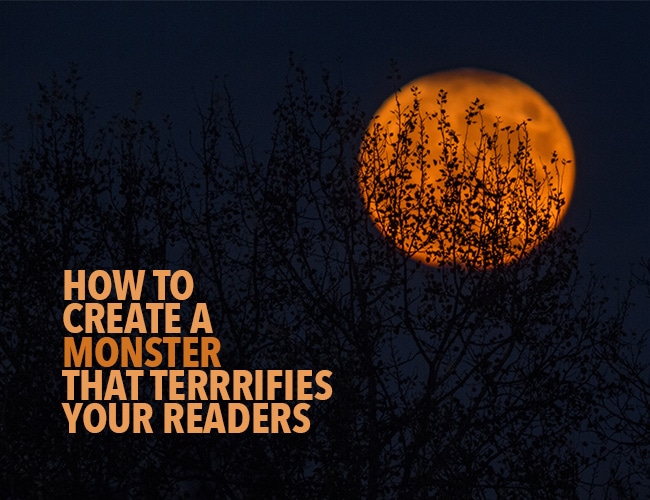 When writing monsters, you could rely on the tried-and-true vampires, zombies, and giant, man-killing spiders. There’s nothing wrong with adding to the monster canon, but it does get a little boring after a while. It’s often better to create a monster all your own.

Decades have been spent honing the standard wants and abilities of vampires and zombies. How can you create a monster just as good in a much shorter time frame?

It’s simple really: You put some thought into rounding out your monster’s character.

Read on for my tips on making your monster come to life!

How to Create a Monster

Your monsters need to have substance. The same amount of thought should be given to them as your other characters. They are characters, after all. While it’s fun to have a nice slasher romp every so often — with creatures that don’t seem to do anything but maim and kill — the monsters that stick with you, the ones that truly scare, have some thought put into them.

This is basic and you probably already nail this every time you write a monster. What’s it called? What does it look like? What does it sound, smell, and feel like? Can it talk or communicate with other monsters in some way? How about with humans?

Is it evil/bad/a killer? Does it hurt us, help us, or just sit on the sidelines as we ignore it? Remember not all monsters have to be scary. And even if they are scary, is it because we don’t understand them? Are they trying to be nice, but have been driven to violence?

Where does it come from?

Background is important if your monster comes from away, wherever that may be. It helps keep you in mind of consistency and logic in your creation.

For instance, if your monster is bright red, why? Is its homeworld red and it blends in better that way? A monster that comes from a cold area would probably have a thick coat of fur. That wouldn’t be so convenient for something that lives in New York City’s sewers.

Think about the development of your monster; don’t just throw spikes on its back because that seems cool.

What does it eat?

This one may seem mundane, but it’s important for character development and logic.

I recently read an awesome book about a den of monsters who lived underground, had been unearthed, and had a penchant for killing humans but not eating them. They were intelligent. They had a society. They had motives. But their home environment was simply a cave, showing no signs of agriculture or prey.

What on earth did the things eat? It’s a question that’s plagued me ever since I put the book down.

Your monster may eat humans, but why? Is it starving and has no other choice? Does it just have a taste for humans?

And remember, killing isn’t eating. If your monster is simply killing humans and leaving the bodies uneaten, why? Where is it getting its nourishment?

It’s questions like these that get you thinking deeper about your monster and help you round out your character.

What are its strengths?

Its strengths should be many and should seem impossible to overcome. The thing that makes monsters scary to us is they’re unpredictable. We don’t know what we’re dealing with and don’t know how the monster is going to react. We simply don’t know what else it’s got up its sleeve. (Speaking of, does it have sleeves?!)

Think beyond strength and sharp teeth. Can it learn and adapt? Can it camouflage itself? Is it able to use any sort of supernatural power like telekinesis?

What are its weaknesses?

Technically, they only need to have one weakness: one your protagonist can exploit in order to defeat it. You can have more than one, but normally the monster is scarier and the tension is amped up more if there’s only one. It makes it seem that much harder for your protagonist to defeat it.

Sure, we’ve got the standard stake through the heart or beheading. But what about something more complicated? Try to come up with a non-traditional (i.e. not a bigger, badder weapon than the monster has) or unexpected weakness (bonus points for irony).

In Signs, the water defeated the aliens. In War of the Worlds, it’s a run-of-the-mill pathogen. Medusa was defeated when Perseus got the bright idea to look at her through a reflection.

Of course, there’s nothing wrong with a good, old-fashioned headshot to kill a zombie if you’d rather not be subtle or you’re working within a word limit. It just might not be as interesting.

What do we know about it?

Ideally, your other characters and your readers know next to nothing about these monsters at the start. Slowly, your protagonist learns more about the creature and develops an often-risky plan to defeat it.

They learn how it kills, how it hunts, how it moves. They learn its capabilities. And ultimately, they discover its weakness.

What does it want?

You monster must have a motivation. That motivation can be simple, like eating or breeding. (Think Alien or The Meg.)

But it can also be more complicated. Is it intelligent? Does it want to take over the world? Does it just want to protect its home environment, its family, or itself?

Is it forced to come out of hiding for some reason? Was it ever hiding, and why?

Is it just having a fun hunting party, like Predator? Did humans do something to it first? (Poor Frankenstein’s monster.)

I’ve mostly concentrated on making monsters that are scary, but they don’t have to be. Monsters, Inc. has plenty of lovable monsters. There’s the Grinch and Jack Skellington and every fluffy thing on Sesame Street. Then there’s Frankenstein’s monster, who’s really only mean if you’re mean first.

Even if your monster is more cuddly than vicious, you still need to figure out motivations and background. (Pro tip: You should do this sort of thing for all your characters.)

Just remember to give your monsters a motivation and keep them consistent and logically grounded in the world you have created.

Do you like to create a monster completely your own, or do you prefer to stick with the standards everyone knows? Let me know in the comments!

Today I want you to spend fifteen minutes writing a monster character profile. Try to get to as many of the questions listed above as you can. Make your monster as “real” as possible. Have fun with it!

Then share your character profile in the comments and give your fellow writers some feedback!