Don’t Compare Yourself to Other Writers 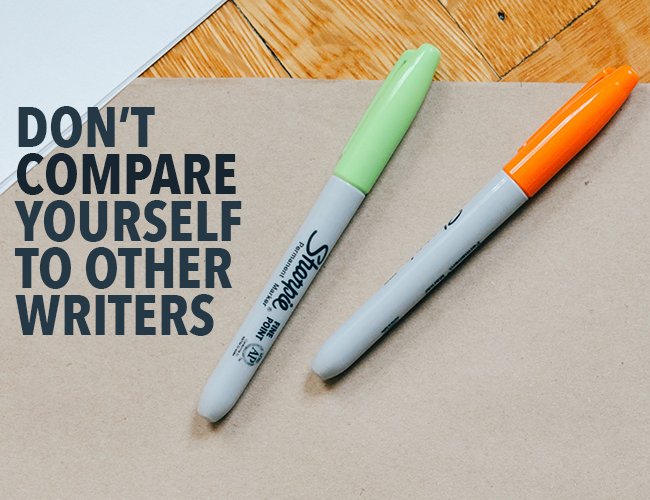 There are also stories that have never been written. Stories only you can tell.

Fiction or nonfiction, the stories you write are unique to your experiences and your creativity. But if you compare yourself to others, you might never write them.

Someone may have written a memoir about their father. The book might have __ 5 star reviews, and be on the New York Times bestseller list. So why would you write a story about your father? You might think, “It has already been written.”

When I was twelve, my father taught me how to skin animals. I wasn't old enough to babysit yet, so I couldn't earn any extra money from taking care of the children of family friends. My father paid me to skin the animals he trapped on his trap line. (He trapped with permission from the game warden, and with permission from the farmers, who were protecting their livestock.)

This story has never been written, and unless I write it, it never will be.

Comparing Your Writing to Other Writers' Is Dangerous

The danger of comparing your writing to another writer is it might prevent you from writing your own story.

The value of a story does not lie in how many people have read the story. Before Harry Potter and the Sorcerer's Stone was published on June 26th, 1997, before J.K. Rowling found a publisher to accept her manuscript, before the story was written, it was just an idea for a story about a boy attending a school of wizardry.

The manuscript for Harry Potter and the Sorcerer's Stone was a good story even if only J.K Rowling had read it.

If Rowling hadn't written her story, if she had given up at the eleventh rejection notice from a publisher, we wouldn't have been able to meet Harry Potter.

However, there is always room for another hero.

And why not the hero that you write?

The world doesn't need another J.K. Rowling or J.R.R. Tolkien; the world needs you. Don't compare yourself to others. Keep writing, and write like you.

A baby learning to walk cannot be as fast as Hicham El Guerrouj. He had been walking and running for twenty-five years and seven days when he broke the world record for the mile at 3:43.13 in 1999.

A writer starting to write will not write with the same quality as Stephen King, who has published more novels than there are states in the United States.

Don't compare yourself to others.

Do you ever compare your writing to another writer? Does it make you want to quit writing? Let us know in the comments.

First, find a piece you have already written. It might be a section of your work in progress you wrote months ago, a story you have not looked at in a while, or a practice you wrote for another post here on The Write Practice. The older the piece you choose, the better.

When you are done, share the original and your new version in the comments below. How have you changed and grown as a writer? How can you see other people have grown? Please remember to leave feedback for someone else so we can all encourage one another and grow together.