Questions About Writing: 5 Essential Questions That Will Focus Your Writing Mindset

Do you have questions about writing like, “How do I make a living as a writer?” or, “How do I write a bestselling book?” 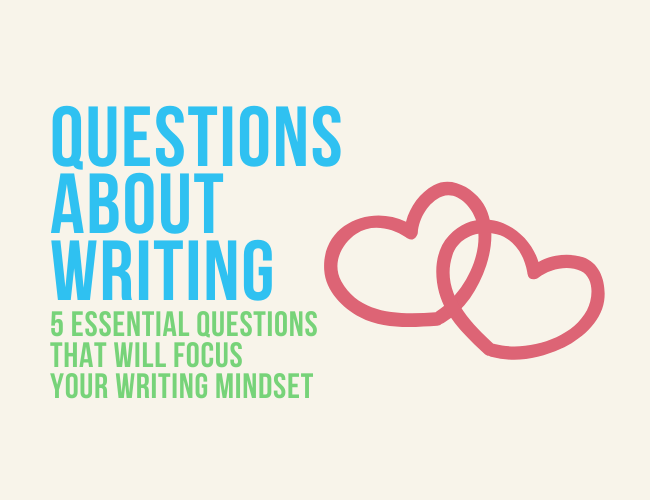 These are the wrong questions to ask about the writing process because the writing questions you ask yourself will change your mindset and how you approach your creative writing.

What are the best questions to ask about your own writing?

In this article, I'm going to share the five essential questions aspiring writers should ask themselves if they want to improve their writing skills.

The Power of Questions

I first decided that I wanted to become a writer when I was seventeen years old.

I was in my room reading A Tale of Two Cities by Charles Dickens for high school, and for some reason the main character (and supporting cast) and the story touched me so deeply that—for a moment—I felt connected.

It was one of the first books that made me feel not alone.

“
Whether young or old, writing a first draft or tenth, asking yourself the “write” questions will determine whether or not you have a healthy writer's mindset.
Tweet this
Tweet

You see, like many kids, I was bullied in school, and for me it had the effect of silencing me. I didn't trust people and I had very few friends. But for some reason, reading that book at that moment, it was as if Charles Dickens had reached through 120 years of history and spoken directly to me.

In that moment, that question people always ask when you're growing up popped into my head: “What do you want to be when you grow up?

Because wouldn’t it be amazing to inspire this feeling in others?

To reach through words and pages and connect with a reader so they knew they also weren't alone, that there is one person, at least, who feels like they do?

In other words, I wanted to become a writer so I could connect to others.

And by asking myself great questions—specifically these five essential questions about writing—I started to overcome writer's block and hold onto my reason to not only write, but finish my book.

And all the ones after that.

There are five questions that have been most transformative for me in my writing, and I believe they're important for you, too. Ask yourself:

George Orwell, in an essay about why we write, said this:

[We write out of] sheer egoism. Desire to seem clever, to be talked about, to be remembered after death, to get your own back on the grown-ups who snubbed you in childhood, etc., etc. It is humbug to pretend this is not a motive, and a strong one…. Serious writers, I should say, are on the whole more vain and self-centered than journalists, though less interested in money.

In other words, Orwell says we write to be admired.

We write to connect to others. Writers or not.

The truth is, being known, being loved, is so much better than being admired. Being loved gives us a chance for a personal experience that changes lives.

For most of human history, artists have been part of the community. Connectors and openers, not untouchable stars. Celebrity is about a lot of people loving you from a distance. But the internet—and the content we’re freely able to share on it—is about taking it back. It’s about a few people loving you up close, and about those people being enough.

Ask yourself, “Why do you write?”

Why do you really write? Is it about fame? Vanity? Celebrity? Or is it deeper than that?

Do you write to connect?

Good writing comes from writers who pour words onto the page with their heart.

And while asking published writers craft questions like, “How did you choose your point of view?” and “How much world building do you do before writing your story?” are great interview questions to ask for writing advice, they won't necessarily give you the momentum you need to write through the tough times.

All writers experience hardship at one point or another. But when you ask the right questions, the ones that empower your writer's mindset, you will find the reason to write through the difficult parts.

And then, you'll finish your book.

2. How do you change people?

I think it's great to make money at writing. I think it's important to get paid for your work.

However, the question, “How do I make a living writing?” is the wrong question to ask yourself.

Because if you can inspire transformation in readers, they will pay whatever you ask for your book.

3. What can you write that no one else can?

If you can write something unique, something different from anything else in the market, something that people also like, your fans will buy everything and anything you ask.

While there are no original stories, it's always important for writers to put their own creative twist on stories that have already been done—and that have proven their impact on readers.

If you're interviewing a writer, this could be a cool question to ask: “What have you written that no other writer could write?”

What makes your writing unique? Why can nobody else write this book?

It's also an important question to ask yourself before you write your own book.

4. How do you connect your emotions to your story?

How do you get so deep into your characters (or else choose characters similar to you and your story) so that you can summon the emotional depth necessary to tell an entertaining and transformative story?

What this mean is how can a reader live vicariously through the main character's journey that they, like the protagonist, change after reading the book?

While plots drive the external parts of a story, the internal arcs of characters are what communicate theme. And these messages are what readers carry with them after they're done reading, and likely try to apply to their own mindsets about life.

Don't underestimate the emotional influence you can have on readers. In fact, prioritize it.

5. How can you live a story as interesting as the ones on the page?

Look at the writers you most admire. See how they took risks with their lives?

Ernest Hemingway, Mary Shelley, John Steinbeck, Virginia Woolf—they all lived lives as interesting as the ones they wrote about. Part of their marketing (their platform you might say) was based on how they lived, not just how they wrote.

The best writing comes from experience.

And so, your biggest asset as a writer comes from your experiences.

How are you going to create experiences that help you be a better writer? How will this help you connect with multiple readers, instead of one particular type of person?

What Questions Do You Bring to Your Writing?

Here are some questions I've heard from other writers:

All of these are questions about writing worthy of your time and attention. However, if you want to become a writer—one with the motivation to make a career as an author—consider the five questions in this post.

These are the questions that will change your writing mindset first.

How about you? What questions are you bring to your writing? Let me know in the comments.

Pick one person you would like your writing to connect with.

Then, write something just for him or her.

Write for fifteen minutes. When you're finished, share your practice in the comments section. And if you share, please be sure to give feedback on a few practices by your fellow writers.