How to Write a Scene: The Definitive Guide to Scene Structure

Once you have a great story idea, the next step is to write it. But do you want to take your brilliant idea and then write a book that bores readers and causes them to quit reading your book?

Of course not. That's why you need to learn how to write great scenes. 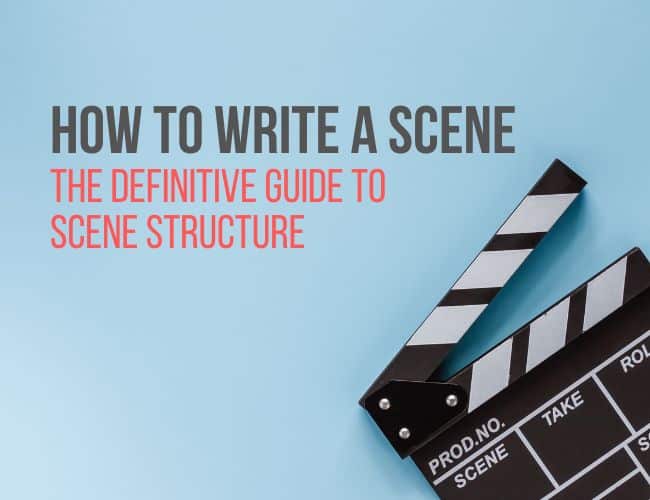 Scenes are the basic building block of all storytelling. How do you actually write them, though? And even more, how do you write the kind of scenes that both can keep readers hooked while also building to the powerful climax you have planned for later in the story?

In this post, you'll learn what a scene actually is. You'll explore the six elements every scene needs for it to move the story forward. Then, you'll learn how to do the work of actually putting a scene together, step-by-step.

We'll look at some of the main scene types you need for the various types of stories, and we'll also look at some scene examples so you can better understand how scenes work. Finally, we'll put it all together with a practice exercise.

Want to jump ahead? Here's a table of contents for this article:

What Is a Scene? Scene Definition

A scene (in a story) is an event that occurs within a narrative that takes place during a specific time period and has a beginning and an end.

A scene is a story event, in other words, or a single unit of storytelling. It is the bedrock of every kind of narrative, from a novel, film, memoir, short story, theatrical play, and graphic novel.

Scenes can vary in length, but they tend to be 500 to 2,500 words long. The average book or film has fifty to seventy scenes.

5 Criteria of a Scene

For a section of narrative to be considered a scene, it must meet several criteria.

“
Scenes are the building block of story, so if you want to write a good story, you need to learn to write good scenes.
Tweet this
Tweet

One quick thing to note: you might have heard of the common writing advice to “Show, Don't Tell.”

Show, Don’t Tell refers to showing the reader what happens in a story using dialogue, action, or description rather than telling the reader with inner monologue or exposition/narrative.

Scenes are, by their nature, shown. You the writer are showing the reader what is happening.

That's why good writers find the most important, most dramatic pieces in their story to show in scenes.

Then, they use telling to link between scenes and give the context, information, and backstory that's still important but not necessarily dramatic.

In other words, show your scenes, tell your transitions. If you don't, if you tell your most important pieces and show your least important, least dramatic moments, you'll end up with jumbled scenes and a jumbled story in general.

What Are the Elements of Scene? 6 Steps to Scene Structure

At The Write Practice, we teach a story structure framework called The Write Structure. It's a universal and timeless way of thinking about story that writers have been applying for thousands of years. (Read our master plot post here.)

So if you want to write a good scene, make sure that it has each of these six structural elements. You can even use these as steps in your scene writing.

Where are we? Who are we with? What should we the audience be seeing or imagining?

Set the scene, usually with description or action, to ground the reader's experience.

The inciting incident is an event in a scene that puts the characters into a new situation, upsetting the status quo and beginning the scene's movement.

The inciting incident doesn't have to be a big thing. That comes later, in the climax. It can be subtle, but the point is that it builds into a much larger thing.

The key point about the inciting incident of a scene is that it must occur early in a scene, usually within the first five paragraphs.

You can learn more in our full inciting incident guide here.

You know that writing advice to get your characters up a tree, then throw rocks at them? This is rock-throwing time.

This will often be the largest section of your scene, and builds directly into the dilemma.

Here you start raising the stakes and begin building towards the story’s climactic moment. It’s important that your audience know exactly what’s at risk here, so work to reveal what's important to your characters here (e.g. their lives, their relationship, their identity) and why that is at risk.

Step 4. Dilemma: The Heart of Your Scene

This is the most important (and overlooked) element of every great scene, and it's what all the action in your scene has been building toward.

A dilemma is when a character is put into a situation where they're stuck and have to make a difficult choice with real consequences.

Here are some example choices:

These are the dilemmas that drama is made out of, and in some form or other, they belong in every single scene in your story. Together with the previous scenes and the scenes that follow, these are the moments that create the character arc the drives the story forward.

5. Climax: Create the Moment Out of Highest Action

Coming immediately after the dilemma, the climax shows the consequences of your characters' choices. As such, it is the moment of highest action in the scene.

Taking our example choices from above, here's what might happen next:

You see how it works, right? You start the movement, raise the stakes, create a dilemma, and pay it all off with a climax full of dramatic energy.

If you did it right, this is either the best or worst moment in your scene. This is also where to insert any plot twists you can think of.

But your scene isn't over just yet. Finally, you have to create a brief pause, often only a paragraph or three, to allow the audience to take in what just happened and prepare the ground for the next scene.

If the exposition is the “before,” the denouement, also called the resolution, is the “after.”

You don't need much writing here, just a few paragraphs, but this element is key to the rhythm of your storytelling.

Now that you know the steps, let's look at a few examples from popular scenes to better understand how this works.

How to Train Your Dragon: Opening Scene Structure

For reference, you can watch the scene here:

I love this scene and this film as a whole (the books are great too!). It instantly sets up not just the stakes of the scene, but the story as a whole, and in general, has nearly perfect structure.

Let's break it into the six elements of plot that we just discussed.

Exposition: “This is Berk.” Bucolic, pastoral, peaceful. Narrated by Hiccup, the viewpoint character.

Inciting incident: Actually nope, there are dragons stealing the sheep.

Rising action: Dragons burn things, people fight dragons, we meet the story's cast of characters, and most of all, we get to know Hiccup, the protagonist, who really wants to prove himself. But Hiccup is told he's not allowed to fight the dragons.

Dilemma: To do what he's told, stay put, and risk being looked down on his whole life OR to do what he wants, go fight with his fancy machine, and risk dying and/or humiliating himself?

Climax: Hiccup does what he wants, hits a dragon, gets into a fight with another dragon, and then burns down most of the village.

Denouement: No one believes he hit the dragon, and he is humiliated in front of the village.

Note especially the location of the dilemma, which occurs about halfway through the scene and comes to a head immediately. It's subtle, implied more than it is spelled out specifically, and yet it creates the drama that follows.

For reference, you can watch the scene here (spoiler alert in case you somehow have never seen this film!):

I like to use this scene because it perfectly displays how a dilemma works.

Exposition: Princess Anna is dying, about to become frozen after being struck by Princess Elsa's magic.

Inciting Incident: With an act of true love, she can be cured, and Kristoff is running toward her to give her the “kiss of true love.”

Rising Action: There's a storm, so this is all very difficult. Oh, and Prince Hans is about to kill her sister.

Dilemma: Princess Anna looks both ways, not sure what to choose. Does she run to Kristoff and save herself but allow her sister to be killed OR does she save her sister and sacrifice herself?

Climax: She chooses to save her sister, running to stop Prince Hans and freezing in the process. The storm immediately ceases.

Denouement: Princess Anna herself supplied the act of true love, removing the magic's curse and restoring her to life.

Write a Great Scene Every Time

Writing compelling scenes doesn't require you to be a genius or know everything there is about writing.

If you just do that, you'll be able to reliably craft a perfect scene that, when brought together, will end up with an amazing story.

So go get writing!

Which of these six steps and elements do you find easiest? which is most difficult or confusing? Let us know in the comments.

Now that you know how a perfect scene works, let's put it to practice. Today, I have two scene prompts for your practice:

Take fifteen minutes to practice. Once you've created your outline, share it in the practice section below.

And if you share, be sure to give feedback to at least three other writers.