The Secret to Writing the Middle of a Story

If you’ve ever had the middle of a manuscript sag and feel flabby, congrats. You’re a writer! One of the questions I ask when get stuck writing the middle of a story is this: “How can I make this worse for this character?” 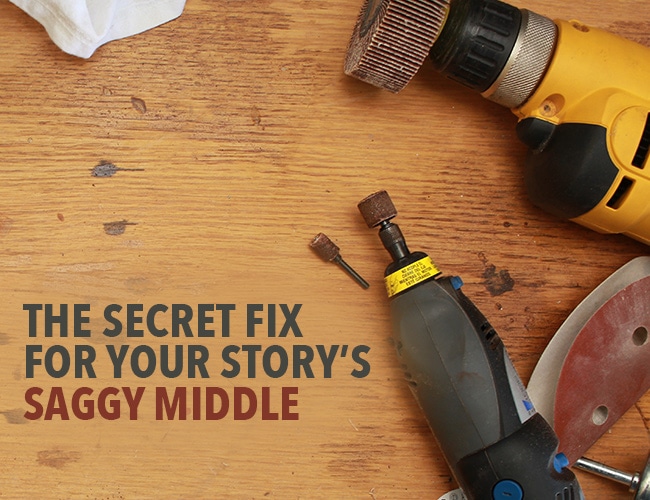 One of the key elements you might use is the very thing we try so hard to avoid on a daily basis: abrasive people.

How can an abrasive character push your character’s arc, keep the plot moving, and deepen the theme? Read on to find out.

“
Characters who don’t face significant challenges won’t act in bold ways to get what they want. Instead of making it easier for our characters, we’ve got to make conditions worse for them.
Tweet this
Tweet

One of the ways you can make it worse for your character is to add or bring to the forefront a character who grates on the protagonist. It’s even better if it isn’t the antagonist, because the character expects tension from the antagonist. Let’s take a look at how adding an abrasive character can rev up the middle of your story and heighten your character’s arc.

The word abrasive makes me think of sandpaper — something that causes friction. When I think of an abrasive person, I picture the kinds of people who make me most uncomfortable: people who cut at the coffee shop when there’s a long line, or those who sit behind me while driving telling me all the better ways to get where I’m going.

Abrasive characters don’t have to be evil, loudmouthed, or even rude. They just have to speak and act in ways that complicate my day and make it harder or more frustrating to accomplish my goal.

As you begin to think of abrasive characters, here are a couple key ways to find and use such a character when you’re writing the middle of a story.

In the middle of a story, a protagonist tries and fails to solve his problem. He’s drawing from his strengths and usually walking the easiest route he can to get what he wants. One way to complicate his journey is to look at your character’s strength and add a character who is stronger in those particular traits or skills.

In The Princess Bride, Inigo Montoya is trying to avenge his father’s death, while supporting himself as a mercenary swordsman. When ordered to kill the man in black, he begins the sword fight using his non-dominant hand. The man in black bests him, even once they both fight with their dominant hand. This complicates Inigo’s journey.

As a part of the character arc, defeat or frustration related to a strength is demoralizing and unsettling. The character learns he has to depend on more than his strengths to get what he wants.

Prey on your character’s weakness

We generally try to hide and avoid our weaknesses, especially when we’re under pressure. To find an abrasive character related to a protagonist’s weakness, it can be tricky to limit yourself to one area. I’m terrible at any number of things on any given day. Choose a weakness that the character needs to improve in order to solve their problem.

For example, let’s say I have a character named Chloe who needs to land and keep a job to pay off a dubious loan she took out under bad advice. Chloe’s weakness is making decisions, and she’s overly dependent on others’ input, something that obviously got her into trouble.

To add an abrasive character, I could give Chloe a co-worker she’s dependent on for success. Then I could make that co-worker more indecisive than Chloe, frustrating her at every turn. Alternately, I could introduce a demanding boss who assumes her indecision is incompetence, which threatens her position in the company.

In either situation, the abrasive character is preying on her weakness (even if unknowingly), forcing her to face it. When she makes small decisions, the character arc rises because she’s forced to act and change in pursuit of the goal.

Sometimes an abrasive person challenges a character’s deeply held beliefs. This is especially effective if done on theme, meaning the interaction with the abrasive character is parallel to the larger conflict.

Let’s say I have a doctor who loses the love of his life in a murder. He wants to bring the killer to justice, but in the end will be tempted to exact revenge instead. Through this character arc, the doctor discovers his ethical boundaries and questions how strongly he believes in “do no harm.”

In the middle of the story, I might introduce an abrasive character who offers to help locate the killer using less than ethical means. Or the doctor could discover one of his beloved terminal patients killed someone and wants forgiveness.

Both of these abrasive characters present a dilemma that requires a choice, and choices drive the character arc.

Writing the middle of a story — and avoiding a sagging plot — plagues every writer. Abrasive people might not be fun to hang out with in real life, but in your stories, they can give your protagonist the perfect push to make tough choices and grow as a character.

Conflict may not be fun, but it sure is interesting. Why not keep your readers turning the pages with some abrasive characters?

Who irritates you on a personal or professional level and why? Can you think of any protagonists in stories who have to deal with abrasive characters? Share in the comments.

For today’s practice, you have two choices.

If you have a work in progress, take a look at your protagonist. What are their weaknesses? What are their strengths? Create an abrasive character who will frustrate them, and write a scene in which they interact.

Don’t have a work in progress? No problem. Here’s your prompt: an artist is preparing a piece she hopes will win an upcoming competition. She’s a creative genius, but she’s not very organized and she struggles to meet deadlines. Create an abrasive character to complicate her story and write the scene.

Take fifteen minutes to write. When you’re done, share your scene in the comments below, and be sure to leave feedback for your fellow writers.