How to Write a Good First Chapter: A Checklist

For the writer, there’s nothing harder than writing the first chapter and final chapter of a book. It is here that all of your perfectionism rears its ugly head calling for a full halt to your progress. 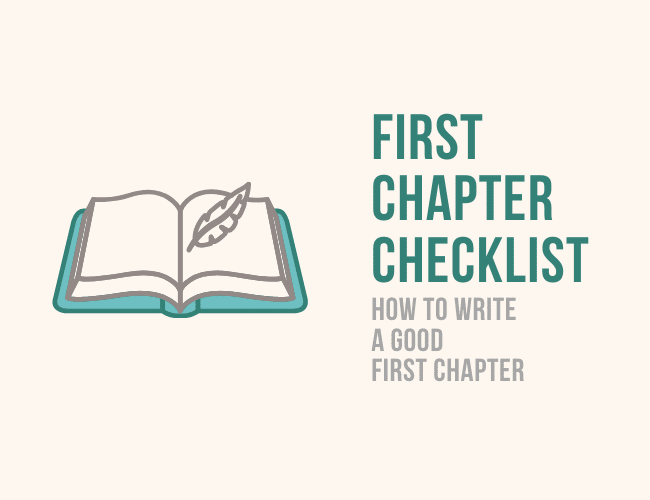 I’ve written and rewritten my first chapter dozens of times, and I’m not alone. Most writers struggle to figure out how to start their novel, and it makes sense. Your first chapter can make or break your book: with readers, agents, and publishers.

So then how do you do it? How do you write a good first chapter? In this post, I’m going to walk you through the seven things you need to accomplish in your first chapter, and give you a checklist that you can use in your novel.

Why Does It Matter So Much that a First Chapter Be Good?

My dad recently finished a new book and wants to submit it to agents. Dutiful son that I am, I helped him find a short list of agents on querytracker.com and talked him through their submission requirements.

Agents, who often get thousands of submissions per month, will tell you how much those first pages matter.

If those first pages don’t hook them, if the writing doesn't instantly capture their attention and make them want to read more, they’ll move on to the next submission.

That means if you want your book to be picked up by an agent and then a publisher, your first chapter needs to be good which means this chapter has a lot of heavy lifting to do, story-wise.

And that leads to a big question: What exactly do writers need to accomplish in their first chapter?

What is your First Chapter Checklist?

How do you write a good first chapter? If you touch each of these things, you’re sure to hook the reader and create a strong foundation for your book.

1. Set the scene through physical movement

Before you can get into the action and drama of a scene, the reader needs to know when and where they are. Publishers, agents, and readers alike don’t enjoy being thrown into the middle of a disorienting action scene. Instead, they prefer to let the scene build up to a climactic moment using the six elements of storytelling (see #6), beginning with a brief amount of exposition.

The best way to set the scene is not through description, which readers, agents, and publishers alike find off-putting in the first sentences of the first scene. It's also not through dialogue, which leaves readers confused—“wait, who’s talking?”

Instead, begin with a character making some kind of physical action through the space that reveals the broader context of the scene.

Your protagonist is the lens through which you tell your story, so introduce them to the reader in the very first scene.

But it’s not enough for the reader to simply see the protagonist. We have to like them enough to want to follow them for the rest of the story.

That doesn’t mean you can’t have a protagonist who is flawed or even evil. It does mean we have to sympathize with them.

Here are seven tried-and-true ways to get your reader to sympathize with your characters. I recommend picking at least one to use in your first chapter, and three in your first few chapters.

The 7 Characteristics of Sympathetic Characters

You can use these seven characteristics of sympathetic characters at any point in your story for any character, even your villains. They are like candy for readers, and will always get results.

However, these characteristics are most important to use in the first chapter when you need to quickly create a connection with your protagonist. In fact, you could argue that this is the whole goal of the first chapter.

3. Establish the Point of View (POV)

What is your story's point of view? Are you going to choose third person limited, third person omniscient, first person, or some other POV?

Establish it in the first chapter and don't change it!

Not sure? Read our ultimate point of view guide.

Establish the type of story you’re writing from the beginning. From the first scene, your reader should know whether this is a science fiction story, a crime novel, a horror novel, or a love story. Research the genre and know the conventions you'll need.

In the same way, establish the value scale that your novel will move on. There are traditionally six value scales in story, and each of these relates to a particular type of story.

Depending on which story type you’re telling, make sure your first scene is set on that scale.

For example, in a love story, make sure the story event occurring in the very first scene deals either with love or hate. Or in a coming of age story, set it in a moment of great immaturity.

Once your value scale is set, create some kind of movement, ideally moving to either the very bottom or very top of that scale.

For example, in an action story, have a moment where your protagonist is almost sure to die.

Or in a love story, begin in a place of complete hatred between the principle characters.

By setting the stakes early, you let the reader know what to expect (and how you’re going to play with those expectations).

Every successful scene, act, and story has six elements that make it work. They are:

The most important of these six is the dilemma, when a character is faced with a difficult choice between two equally good or equally bad options.

This dilemma is what causes the movement of the scene along your value scale and what creates the essential drama.

All that’s to say, make sure your first chapter has each of these, but especially the dilemma!

What About Books With Prologues?

For books that have a prologue, they may not achieve all of these things below in the first chapter.

That said, the prologue should still introduce the reader to the journey ahead, and these seven elements. are effective ways to do that. Consider using each of them as you can.

The Essentials of a Good First Chapter

Don’t be a perfectionist with your first chapter, especially if you’re writing a first draft.

Don’t try to write a publishable, award-winning, NY Times-bestselling first chapter the first time you sit down to work on your new story.

Instead, just do the work.

Set the scene with action.

Introduce your protagonist in a sympathetic way so your readers can fall in love with them.

Set the genre and value scale.

Hit each of the six elements.

If you do that, you’ll have a strong first chapter that you can make even better in revision.

Put the first chapter checklist to use with your story.

Does it hit all seven steps of the checklist? Which of the seven characteristics of sympathetic characters does it touch on? What is it missing? What can you change to make sure you hit all of the steps?

Take fifteen minutes to write, then share your answer in the practice box below. And don't forget to leave feedback for your fellow writers!