Climax of a Story: Definition, Examples, and Writing Tips

How do you tell a great story? Perhaps the best way to judge a story is by how good the climax is.

If your story isn’t good, the climax will be muddled or boring. A good story, though, will bring together all the tension that has been building since the exposition into one perfect scene with a climactic moment that overwhelms the audience and leaves them in awe.

What is the climax in writing, though? And how do you write a compelling climax? 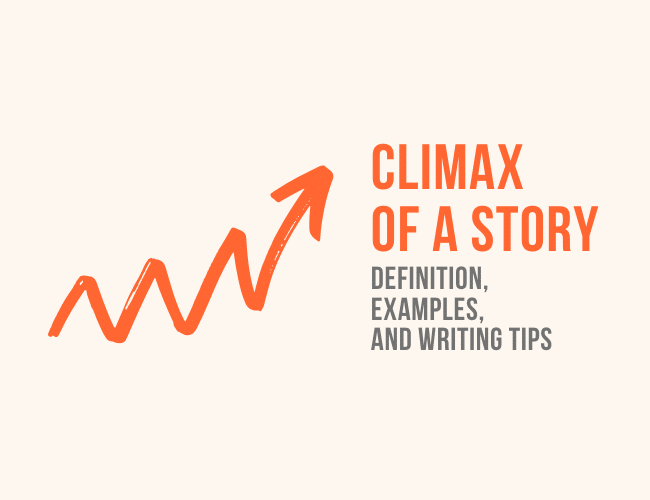 In this article, I share the definition of the climax in a story. I’ll give examples, talk about where it fits in the dramatic structure, and share writing tips on how to write a good one.

Note: this article contains an excerpt from my new book The Write Structure, which is about the hidden structures behind bestselling and award-winning stories. If you want to learn more about how to write a great story, you can get the book for a limited time low price. Click here to get The Write Structure ($5.99).

Ready to awe your readers? Let’s get started.

The climax in a story is the point, usually near the end of the third act, where the value of the story is tested to its highest degree. As such, it is also the pivotal moment in a story with the greatest amount of drama, action, and movement as the character makes a choice (related to the central conflict) as presented by their dilemma or crisis.

The Climax is a Test of Value

All stories move. They rise and fall. Movement and change is what makes a good story good, and if the story isn’t moving for too long, there’s probably something wrong.

In my article on story arcs, I talked about how stories move. They don’t move through a heightened amount of external conflict or internal conflict, although that’s part of it: more talking, more car chases, more “action.”

Rather, stories move based on the core value that the entire story is about.

For example, a love story’s core value is love, of course, which has its opposite in hatred.

If you put a traditional love story on a scale between love and hatred with ignorance in between and mapped out the values, then you might find that the basic elements of the story go like this:

Stories that follow this structure include Pride and Prejudice, Twilight, Pearl Harbor, and more.

For our purposes though, take special note of the climax, in this case the Proof of Love scene. In a thriller, this wouldn’t be a proof of love scene; it would be called a “hero at the mercy of a villain scene.”

Or if it were a mystery novel, it would be “detective explains how the murder happened,” perhaps putting himself/herself into the crosshairs of the villain. Or if it were an adventure story, it would be the big, final, life vs. death battle.

The point is, the type of climax changes based on the value of the story.

In other words, the climax is the moment where the core value of a story is put to the final test, the biggest challenge.

Some people say you need more action in a climax, or more conflict. But you only need action or a huge battle in an action story, and all climaxes are about values in conflict, not conflict for its own sake.

So figure out what value your store is about, then tap into it and bring that value (and its opposite) into the primary conflict.

How the Climax Fits Into the Dramatic Structure