How to Write a Novel That Readers Can’t Put Down

Want to write a novel readers can’t put down?

I’d love to come up with a yarn that grabs people like Harry Potter and The Hunger Games did. Doing so would practically guarantee a large and loyal fanbase for years! 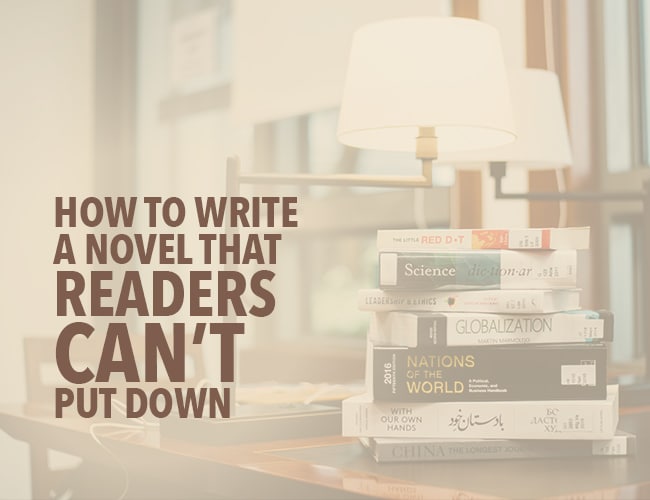 Yet writing this kind of story is deceptively difficult. The story we want to write is always a good one in our own minds. But when we put the words on the page, they rarely possess the page-turning qualities we imagined they would.

Thankfully, there’s a way to set yourself up for success. Here’s how to write a novel that readers can’t put down!

Why Readers Put Novels Down

Readers put novels down when they reach their own satisfying conclusion, rather than the one you’ve created for them. This early resolution usually takes one of two forms:

To keep readers hooked, you need to make them care and keep them clueless.

“
Readers will quit reading your book if they know what happens next — or worse, if they don't care. To keep them hooked, make them care and keep them clueless.
Tweet this
Tweet

Imagine a time when you were deep into a novel but had to take a break. During your hiatus, whether for work or some other commitment, was the story stuck in your head? Was the dialogue running on repeat, or a scene playing out like a film in your imagination?

This is the holy grail of storytelling: To lodge our story so deep in our readers’ minds that they can’t get enough of it!

Unfortunately, this is a rare feat. But there is a clear path to writing stories that readers simply can’t put down.

How to Write a Novel That Readers Can’t Put Down: 3 Strategies

Ready to find out how to write a novel that readers simply can't quit reading? Try these three strategies in your stories:

To spark your readers compassion, you need them to like your protagonist immediately. If it takes five pages to like him or her, it’s too late. It has to start on page one.

Of course, “like” here is a relative term. I “like” the character of Walter White from Breaking Bad even though he transforms into a monster. But as a character, as an intriguing human being, he’s incredible likeable, especially in the show’s pilot episode.

Here are three quick steps to creating a likeable protagonist on page one:

The first two are very common characterization tools. Most authors give their protagonists a goal and a flaw that are empathetic, easily connecting with most readers.

But the third is the key to making the protagonist “likeable.” Why is changing the status quo so likeable? Because we all long for it! Most of us live our lives stuck in the mud of “normal” and fantasize about that one day when everything will change. Even if our intentions aren’t totally pure, we wish for the courage to challenge the way things are and get going on an adventure.

Do this with your protagonist and some surrounding characters, and you’ll find your reader loving your characters from page one.

“
Want your readers to stick with your book? Make them care about your characters.
Tweet this
Tweet

Begin, and continue, with incredibly high stakes. Everything that happens in your novel, every choice, every consequence, and every little detail, has to matter.

This doesn’t mean that the pacing is breakneck and exhausting. Rather, it means that every choice carries massive penalties for failure. It means the loss, heartbreak, and terrible pain threaten at every turn.

This, in literary terms, is conflict. Danger, opposition, fear, urgency. The stakes.

Readers care when everything is on the line. They care when characters they like stand to lose. “I have to know what happens to Alex,” they’ll be thinking all day at work or on the commute home.

When you put likable characters in peril, readers won’t be able to ignore your story.

Be sure to do this throughout the novel. Vary which character is in danger, and get creative with the kinds of trouble that can pop up. Make goals not work out. Play with conflicting motivations.

Whatever you do, keep those likable characters in trouble. It’ll keep your readers’ noses in your novel!

Finally, readers can’t put down your novel when it refuses to be predictable.

It’s true that readers probably won’t quit if they care about your embattled characters. But if they can predict where the story is going to go, they may be tempted to thumb their way to the end of each chapter to save themselves the time and stress. I’m guilty of doing this to a fair share of novels!

The trick with unpredictability in your story is that it much be genuine. This involves lots of rewriting. You can’t create truly genuine plot twists in one try. They must be discovered, excavated from the raw material of your characters, setting, and plot.

If you struggle with clichés, write down some common ones. Then fill in the characters, goals, and events that might fit each cliché.

For example, if you’re writing a story about a boy, Ricky, whose mentor dies in a fire, you might write down this cliché: The mentor isn’t actually dead, but is resurrected somehow.

To combat this, you could make a rule for yourself: “The mentor either dies and stays dead, or doesn’t die.”

When you plan your story this way, dodging cliché bullets and predicting your readers’ expectations, you’ll be well on your day to writing an irresistible page-turner!

Your Stories Can Captivate Readers

Writing a novel that readers can’t put down isn’t just a thrilling accomplishment. It’s the fulfillment of the dream to write. There’s nothing quite like losing yourself in a rip-roaring story filled with characters you care about.

You, too, can deliver these page-turning, unmissable experiences.

You, too, can write a novel that readers can’t put down!

Have you ever quit reading a book without finishing it? Why? Or, what's the last book that hooked you? Let us know in the comments.

For fifteen minutes, practice creating a likeable character, as outlined in Step #1. And to keep things simple, I’ll go ahead and provide a name for you: Alan or Candace. Take some time to dream up your character, giving him/her a relatable goal, a relatable flaw, and a short scene of cleverly upsetting the status quo. Have fun!

When you're done, tell us about your character in the comments. And if you share, be sure to comment on your fellow writers' characters, too!