How to Right a Book in Nine (Not So) Easy Steps

(NOTE: Step one to write a book, get a good critique group who will catch those spelling errors.)

Seriously though, wouldn't it be great to write a book? To see your name on that glossy cover, to flip the pages filled with words you've written, to be able to tell your friends, “I'm an author.”

How do you write a book? 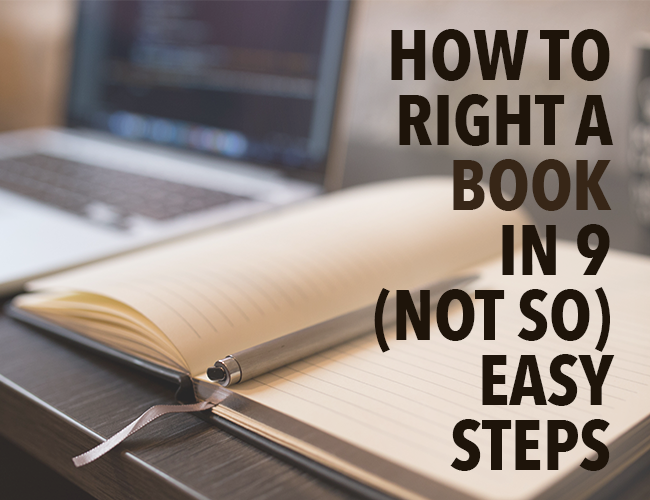 9 Steps to RIGHT a Book

The hard truth is that while there are certainly many joys of writing, it can also be an incredibly boring, frustrating, and even embarrassing process. I regularly think while writing, “How could I be this stupid? How could writing a single paragraph be this hard?”

And yet, if you're like me, hearing that writing a book will be a long, difficult journey won't stop you from wanting to write one.

Thus, here are nine (tongue-half-in-cheek) steps to writing a book:

As Mary Poppins says, “Well begun is half done.”

If you want to write a book, write the first chapter. See if you can do it in one day. It may not be perfect, and you may not keep any of it in your final draft, but you will have begun.

2. Figure out what your book is about.

I don't mean, “My book is about a teenage girl trying to survive high school.” I'm talking about an overarching theme, something that ties the book together and makes it worth reading.

At some point in your writing process, whether you're writing a novel, a memoir, or a non-fiction book, you'll need to figure out what your book is about, and why other people would want to read it.

Once you figure out your theme, focus your book on it maliciously, cutting anything that doesn't have to do with it.

3. Read books similar to yours.

Reading titles similar to yours is the best thing you can do to write a good book. Go to your local library, your favorite bookstore, or hit up Amazon.com and get five books similar to yours. When you're not writing, turn off the TV and read. Your future readers will thank you for it.

After having this experience five or six times, I realized “the breakdown” always comes right before a breakthrough. In fact, breakdowns are a sign you're almost finished. Push through the suffering and keep writing. You'll have a finished book soon.

My first book took 550 hours to write. Yours might take longer. If you don't schedule time into your day to write, your book won't get written.

Many writers find that the best times for them to write are either early in the morning or late at night, but honestly, it matters less when you write and more that you write every day. If you have a day job and are only able to write two hours a day, it will take 275 days to get to 550 hours. When that alarm goes off at five am, just think of how good it will feel to have your finished book in your hands.

6. Get to know other writers.

One of the best ways to motivate yourself through the hard parts of writing a book is the support of other writers who have done it too. If you don't have any friends who have written a book, reach out to a local writers group or join Becoming Writer and get to know our community.

When you finish your first draft, throw yourself a party. Go out to your favorite restaurant with a group of your closest friends. Pat yourself on the back for a job well done.

But DON'T show it to anyone!

First drafts are almost always awful pieces of writing. To save yourself the embarrassment of typos and misspellings like the one in the title of this post, you have a lot of work to do.

8. Work on drafts two and three.

There's a writer's proverb that says, “All good writing is rewriting.”  It's completely true.

Most professional writers write three drafts of their books, if not more. Here's a good resource on how to know when your book is finished.

9. After you finish your book, start the next one.

The unfortunate truth is most first books aren't published, and even if yours is, it's unlikely you'll make enough to make a full-time living from it. If you want a career as a writer, you'll have to write several more.

Fortunately, writing books is addictive. Don't stop. The very next day after you finish your first book, start on the second one.

Writing A Book Is Practice

The best writers practice, whether they're international bestsellers or just getting started. Practice is hard. It's stretching. You feel sore after you practice. And yet it's the only way to get better.

The best writers, the best humans, are never finished practicing. They are always pressing into discomfort. They're always trying to perform better than the last time.

Become the kind of person who endures discomfort for the sake of growth. If you don't, you will have a very difficult time writing a book.

Want to write a book? I've put together a one-page guide to help you find an amazing book idea. Get your copy here (it's free!).

Do you want to write a book? What tips do you have, or which of the tips above stick out to you most? Let me know in the comments.

As we talked about above, “Well begun is half done.” If you want to write a book, start today. Or, if you're in the middle of writing your book, spend some time working on it now.

Write your book for at least fifteen minutes. Then, post a paragraph or two in the comments to encourage the community. And if you post, be sure to comment on a few practices by other writers.