Into vs. In To: The Simple Guide to Keeping Them Straight

Stuck on the distinction between “in to” and “into”? You're not alone! Using the single word “into” is often misplaced with two individual words, “in” and “to.”

In this article, you can learn some quick grammar rules that can help you remember how and when to use these words in the English language. 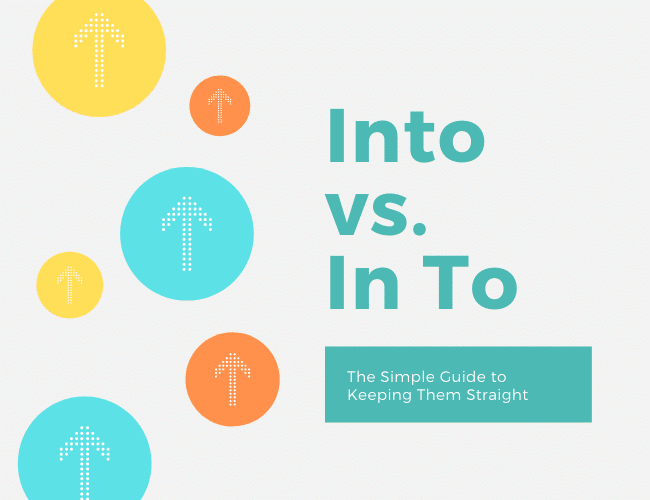 Into vs. In To

Use “into” to describe where something is: going inside something else.

Use “in to” based on the verb that comes before it. It can have many meanings, but here’s a quick tip that covers some of them: if you can replace it with “in order to,” use “in to.”

Read on for the longer explanation, plus examples of into vs. in to. Or download ProWritingAid, my favorite grammar checker, which can help you get these two words right automatically.

Into Is a Preposition

Being a preposition, into also means it denotes a location, and in this case, a movement toward a location.

In most cases, into will place something inside another object, or into another space.

Kerri stirred the chocolate chips into the cookie dough mix.

Apart from phrasal verbs, into and in to are pretty easy to figure out.

It can also denote some kind of transformation. Ever met Jim, who has automobile shapeshifting powers? Here's what he does:

Jim turns into a car.

Remember, in this case, you wouldn't say, “Jim turns in to a car.”

And if Jim were driving the car and not performing a Kafka-esque transformation, you wouldn't say, “Jim turned into the driveway,” because that would mean he became a driveway. Which would be kind of weird, right?

“In To” Are Two Separate Words

“In” and “to” are two unrelated words: the adverb “in” and the preposition “to.”

Sometimes they bump into each other (by the bump into, not bump in to each other, because phrasal verbs, those pesky things). And when that happens, chaos ensues. Just remember what we talked about above, though, and you'll be fine.

“In” and “to” can have many meanings depending on the verb that comes before “in,” but a common one is “in order to.”

“Into” vs. “In To” Is Hard Because of Phrasal Verbs

A phrasal verb is a verb made of two words. There are several phrasal verbs that contain “in,” and this is the beginning of all our troubles.

Here are some of the phrasal verbs containing “in”:

Here's why this matters:

When “in” is part of a phrasal verb, it's always “in,” not “into.” Changing it to “into,” even if the preposition would be appropriate,  would change the meaning of the verb.

Here's an example of a phrasal verb used correctly and incorrectly:

Correct: Can you log in to your computer for me?

Incorrect: Can you log into your computer for me?

Incorrect: Can you login to your computer for me?

Correct: I'm going to turn in to bed.

See, that would be weird, because unless you're Harry Potter, transfiguring into a bed will be tough!

“Into” is also part of a few phrasal verbs, like:

Here, these prhasal verbs are always “into.”

Are you struggling with “into” vs. “in to”? Post your problematic sentence in the comments section, and if you're a grammar pro, see if you can help someone out by answering their question!

Here's a writing prompt so you can practice into vs in to:

There's a hole somewhere. Maybe it's in the ground, maybe it's in space, maybe it's in a fence, but it's there. Write for fifteen minutes about that hole, using into and in to properly as often as you can.

Post your practice in the comments and leave some feedback for your fellow writers.