What TV Can Teach You About Lazy Writing

This guest post is by author Noelle Sterne. Noelle is an author, editor, and writing coach. Her current column in Coffeehouse for Writers addresses writing problems, pains, and groans. In her book, Trust Your Life: Forgive Yourself and Go After Your Dreams (Unity Books), she helps readers let go of regrets, re-label their past, and reach their lifelong yearnings. Visit Noelle at trustyourlifenow.com.

As a writers, you are sensitive to words. After all, they’re your currency. Even when you're taking a break to watch TV, you may unconsciously be evaluating—with disdain or grudging admiration—the words you encounter. Developing sensitivity for lazy language can help you assuage any lingering guilt for taking breaks, especially with TV shows. 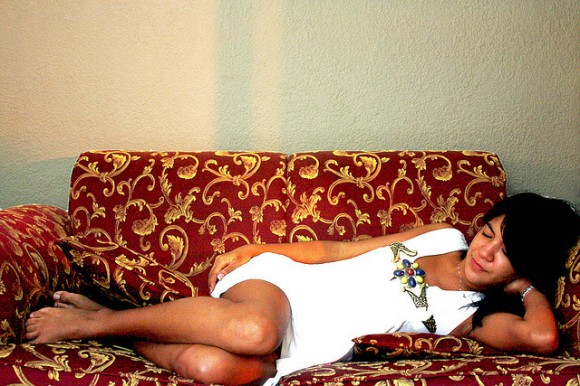 Don't be lazy with your words. Photo by Scarleth White.

Admittedly a rationale for marathon TV watching, I discovered that television shows can teach valuable lessons in our writing, especially to spot those standard scripted sentences like “I want my lawyer,” “Crash cart, STAT,” and “We need to talk.” Once we recognize the penchant for too-easy language, we can learn from and avoid it in our writing.

Here I describe two types of lazy language and suggest lessons we can learn from them and remedies to apply in your own work.

In an episode of “Raising the Bar,” a (belated) TV series about public defenders, a lawyer defends elderly twin brothers who have illegally cashed a deceased friend’s Social Security check. Instead of acknowledging the seriousness of their case and listening attentively, the brothers (played by actual old-time comedians) barrage the attorney with a constant stream of jokes.

One brother rattles off a story about an old man who goes to the doctor. When the doctor asks for samples of bodily substances, the patient replies, “Doc, just take my underwear.” The other brother shouts, “No, stupid! Underpants! Underpants! Specific is always funnier.”

Lesson: He’s right. Specific is also, well, more specific. How can you sharpen your language?

Remedy: Say you’re writing a mystery set in winter in Chicago about a man in dire circumstances. You’ve supplied enough of the backstory to show him believably forced to rob a shipment of expensive fur coats. You write, “Jeffrey pulled on his jacket and headed out the door.”

Given Jeffrey’s poor circumstances in a freezing Chicago night and his motive for his choice of robbery, the story is enlivened and our sympathies deepened when we know what kind of jacket he pulled on. His personal situation contrasts radically with what he’s robbing: “Jeffrey pulled on his windbreaker, much too thin in the brutal weather, and headed out the door.” Or, better: “Jeffrey pulled on his thin windbreaker, threading his hand into the torn left sleeve, and headed out the door.”

One Sentence Fits All

Today’s trendy colloquialisms show up in many television shows. A ubiquitous offender I’ve heard on almost every primetime show is a question with particularly annoying tortured syntax.

One example: In a series of TV movies adapted from Robert B. Parker’s Jesse Stone mystery novels, a Los Angeles homicide cop fired for drinking becomes sheriff of a small New England town. With recurring regulars and often absorbing plots, at some point almost every character asks another that same question.

When Jesse reveals an arcane statistic about the population of a far-off small Western town, the homespun woman deputy asks, “You know that how?”

When Jesse confronts his rather cool sometime love (or lust) interest with a certain accusation, she asks, “You know that how?”

When Jesse’s cop-turned-shrink tells him about corrupt big-city cops, Jesse asks, in an inspired variation, “And you know this how?”

Whatever the burning curiosity, why does every character speak the same way?

Lesson: Vary your dialogue! Match the speech with your character! Resist the temptation of today’s hot verbal fashions.

Remedy: Your characters’ responses should reflect their natures, as in these possibilities.

Homespun woman deputy: “Wow, Jesse, how did you get to know that?”

Jesse’s lover: “Ha, big man. I can’t imagine how you knew that.”

Jesse to shrink: “You’re the former big-city cop. Who was your pipeline?”

If you’re stuck for a reply true to the idiom of a given character, let the character talk to you, as some authors and writing gurus counsel :

In The Art of War for Writers, James Scott Bell advises writing out a character “voice journal,” his favorite way, he says, of getting to know a character in its own words. “The voice journal is simply a character speaking in stream-of-consciousness mode” (p. 116).

Invite your character to speak. You may need to let him or her go on a while, but you’ll know, in our example above, when you hear the right variation of that maddening question. As you prompt your character, you’ll notice the natural speech patterns. Your character will become less one-dimensional, your story will ring truer, and your reader’s interest will be sustained.

Even when you feel lazy watching television, you can counter your guilt by learning from the imprecise, lazy language of others’ productions.

When you finally turn away from the TV screen and to your own, you'll use what you learned.

You will tackle you work with greater attention to enhancing specifics and language that reflects the uniqueness of your characters.

What about you? What have you learned about writing from watching television?

Choose a paragraph or a page from one of your works and for fifteen minutes comb it for either too many generalities or too similar dialogue, or both.

When your time is up, share your practice in the comments section. And if you share, please be sure to give feedback to a few other writers.