It’s goal-setting season again! Have you set your writing goals for 2021 yet? Do you plan to submit any writing to editors or literary agents this year? 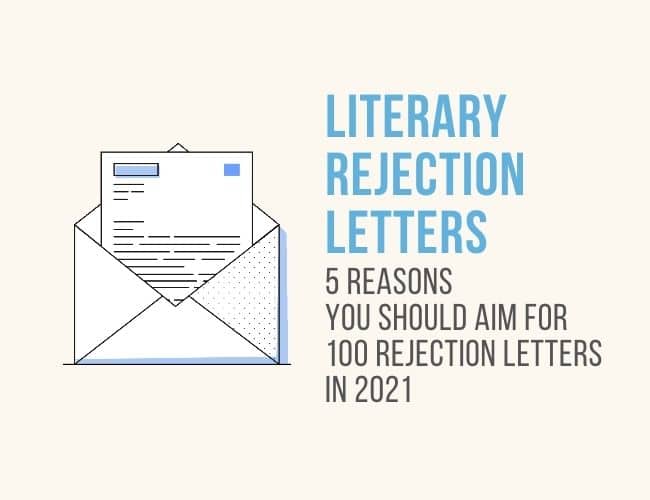 Love them or hate them, the idea of setting goals permeates the entire month of January. And most of those goals are “positive.” From physical appearance to self-care to organizing your pantry, it’s all about improving one’s life.

And most of those goals end up in the dumpster before the month’s end.

I have a new approach for you: Set a goal for getting (and overcoming) one hundred literary rejection letters in 2021.

Read on for my very sound reasoning on the subject.

Set a Goal to Get 100 Literary Rejection Letters This Year

(I’m talking about writing rejections in this post, but if you want to apply this to your dating life, that would probably work as well.)

I want you to commit right now (and say so in the comments!) to trying hard to get one hundred book rejections this year. Anyone rejecting it counts. Agents, editors, publishing houses, other writers reading your book.

If you write a poem for your crush and they reject it? That counts.

Short story publications that unfortunately kick your beautiful short back to your door? Counts!

Don’t let this goal make you squirm. There’s a lot of good that will come from it.

And if you’re still not convinced, here are five reasons why I think this is a writing goal must.

“
Set a goal for your writing this year. Need an idea? Try this goal: Get your writing rejected—yes, rejected—100 times.
Tweet this
Tweet

1. Rejections are not failures

Yes, getting rejections sucks. We have plenty of posts on how to soothe your ego after you get one. (See here, here, or here.)

I’m not here to tell you to suck it up. Getting any sort of literary rejection letter hurts. I know. I’ve been there, literally hundreds of times. (It does get easier. Mostly.)

But here’s the thing: getting rejected means you put your writing out there.

It means you tried.

And it means you’re getting better at writing because you’re spending enough time with it that you’re finishing projects. You are in a position for feedback and critique.

Putting your writing out there tacks guts,

Getting rejected is a sign of bravery and resilience.

2. Odds are you’ll get more acceptances

There’s one simple reason to collect rejections like they’re going out of style:

Trying for that many rejections means there are bound to be some acceptances in there, too.

It’s really that simple. Odds are, if you aim for a hundred rejections, you’ll end up with way more acceptances than you would’ve otherwise.

The first year I tried for a hundred rejections, I didn’t make my goal.

Why? I ended up with over twenty acceptances. Compared to previous years, I’d quadrupled my acceptance rate. Quadrupled!

I would have never, never hit that many acceptances if I hadn’t had my rejection goal.

My goal of rejections made me set aside time each week to look for publications and submit to them. Every single week.

Other years, I got around to submitting when I thought about it, which wasn’t super often given all the other goals and responsibilities on my plate.

That’s why aiming for a designated number of literary rejection letters became so important.

It made me commit to prioritizing my writing, and then inevitably increased the odds for some acceptance letters along with the rejections.

Going for a certain number of acceptances, even if it’s a low number, can seem too ambitious, especially when we’re talking about something as subjective as writing.

And odds are, the more eyes on my work, the more stories I’ll have published.

Don’t get mad; get writing.

Stephen King talks about keeping his rejection slips in his book on the writing craft, On Writing. He had a nail in his room and every time he got a rejection letter, he skewered it on the nail. The rejections piling up were a constant motivation to keep writing and to keep submitting.

Yes, it’s hard seeing all those rejections in your inbox. But that “I’ll show them” attitude will come through.

That first year I aimed for a hundred rejections? I also wrote twice as many short stories that year compared to previous years.

Partly because I was out of stories to submit since so many had been accepted!

While collecting literary rejection letters doesn’t sound like a beloved keepsake, that stack of letters will be the day you’re accepted.

The only way to get an acceptance letter is to keep writing—and submitting your work.

When rejection is used as motivation instead of discouragement, you start to grow as a writer instead of leaning towards giving up on your dreams of getting published.

Become the former. Set yourself a goal of one hundred literary rejection letters in 2021.

Yep, there is improvement to be had here.

Rarely, you’ll get a note from the editor saying what exactly they thought could use improvement in your story. And if you do, take that seriously! Any feedback from an agent or editor is a huge win, since it means they see potential in your story, even if it’s not quite in a place where they’re ready to accept it.

By sending you a personal note, editors and agents not only took the time to help you out, but they also gave you a hint as to how you can be published with them later.

However, more often than not, you will get a form rejection letter. And that’s fine!

Editors and agents receive a ton of slush. They just don’t have enough time to answer everyone, so do your best not to take a literary rejection letter personally. Instead, in this instance, take a look at the types of stories that are getting attention from editors or accepted. What do they have in common?

What do the stories that keep getting rejected over and over again have in common?

Studying the difference and tweaking your work so it’s in the acceptance group is a healthy part of the revision process.

That’s how you improve your writing.

5. Having a rejection goal helps your mindset

When you have a goal, you expect to achieve that goal, right? Otherwise setting it is kind of stupid.

Having a goal of one hundred literary rejection letters helps you take the icky blow for each individual rejection easier.

I’ll let you in on a secret.

I’d known rejection was part of the writing game when I started writing. I was prepared when I got my first one. I did not cry or react negatively in any way. I’d expected it, after all. (Though I do still remember the publication and the name of the editor.)

I cried when I got my third rejection.

There are still some rejections that I take hard. Mostly when it’s a prestigious publication or I’ve made the shortlist only to be ultimately turned down.

But since I have my rejection goal, ninety-nine percent of the time I simply mark it down and send the story out again.

Since my actual goal isn’t X number of publications or awards, the rejections don’t seem as important.

And as for the particular publication I mentioned above, the publication and editor only opens for submissions once a year. I submit, and am rejected, every year. I will get published with them someday, though. See my previous points about how more rejection letters equals acceptance letters, as well as using literary rejection letters for motivation.

I want you to join me in aiming for one hundred literary rejection letters this year. It might be scary at first, but I promise it’s worth it.

Take the negative word of “rejection” and turn it on its head. Make it something positive!

Let’s do this together.

One hundred rejections, here we come!

Are you scared of rejection? What can you do to get over that fear? Let me know in the comments, and support your fellow writers by responding to their posts.

Your phone just ting-ed and you see an email in your inbox. It’s from that publication you’ve been waiting to hear from! You open it, and the first words are:

Thank you for submitting your story to us. We’re sorry, but…

You’re obviously upset. How do you react? Do you get angry? Vow to never write another word? Put it down and try again? Set a timer for five minutes and write about your reaction. Then study what you wrote.

Why did you react that way? What can you do next time that’s better for your mental health AND your writing career? Why do you want to keep writing despite rejection? Set a timer for ten minutes and write the answers to these questions. Come back to this piece of writing the next time you feel like giving up.

Post your reactions, good and bad, in the comments. And please comment on your fellow writers’ posts!

Let’s give each other some encouragement!