Maybe vs. May Be: The Simple Trick to Always Keep Them Straight

If you want to improve your writing, it doesn't hurt to master some English grammar skills. One of the questions a lot of writers asks is how to use the word maybe: specifically, when to use maybe vs. may be. 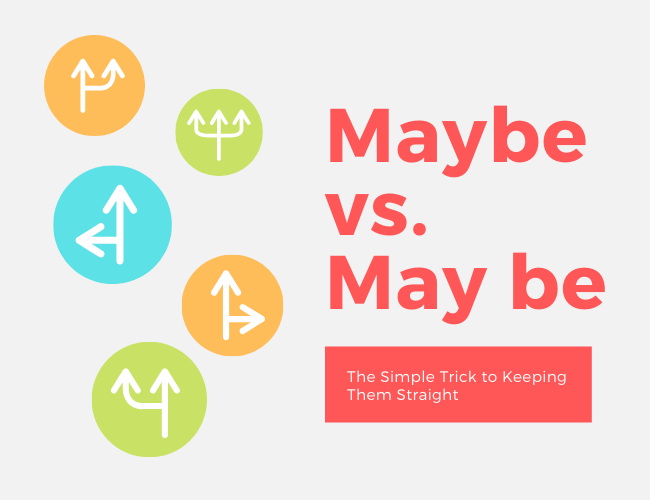 Don't worry. You're not alone in thinking that the English language can have some difficult rules to remember when it comes to grammar and writing.

Today, let's focus on when to use the word maybe versus the phrase may be to improve your writing.

Here's the quick rule for maybe vs. may be:

The Simple Trick to Maybe vs. May Be

If you're interested in knowing WHY this is true, read on!

The Difference Between Maybe and May Be: The 9 Parts of Speech

Maybe and may be are both used to discuss possibility. However, they are different, with the main difference between these two words being that they are two different parts of speech.

As you may remember from elementary school, there are nine different parts of speech:

Need a refresher on these? Check out our full parts of speech guide here.

But which part of speech do maybe and may be fall under?

Maybe Is an Adverb

Maybe is an adverb, which means it needs to modify a verb. As an adverb, the word maybe means possibly.

It's also a synonym for perhaps.

Also, notice how where a word like “might” is not usually used in the beginning of a sentence, the verb “maybe” very well could be—something worth pointing out since many ESL (English Language Learners) mistake maybe for might when first learning American English.

But what about the word may be?

May and Be Are Both Verbs

On the other hand, the phrase “may be” uses two verbs, which can work as separate words. This also means that “may” and “be” express a state of being.

Separated, “may” is a modal verb and “be” is a main or auxiliary verb.

When these word are separated, “may be” acts a verb phrase that means “could be” or “might be.”

Separated, the verb “may” expresses possibility where the verb “be” express a state of being.

As verbs, the phrase “may be” will always modify a noun. Some example sentences of this are:

The English language often combines two different verbs that, when placed together, usually convey a different meaning than the verbs do when they stand alone.

How to Use  Maybe vs. May Be (With Examples)

The tricky fact is that they have similar meanings, which makes it more difficult to distinguish. So with that in mind, look at the difference between these two words in context:

The first sentence is correct because “maybe” is modifying the verb “will be.” If you replaced it with “potentially” it would mean the same thing, but if you replaced “may” with “might” it wouldn't make sense.

The second sentence is correct because “may be” is the action for the proper noun, “Deon.” If you replaced “may” with “might” it would sound normal, “Deon might be interested….” Sounds good, right? But if you replaced it with “potentially,” it would be weird.

“Deon potentially interested….” Unless you're a caveman, that doesn't sound right.

Let's look at some incorrect examples:

For the first sentence, again try replacing “may be” with “might be” and you'll find it sounds more like Yoda-speak than normal English.

For the second sentence, replacing “maybe” with “potentially” feels weirdly clipped. You'd have to say, “Shirley potentially will be going…,” to make it work, and even then, “may be” is much smoother.

Let's look at a few other examples that use correct grammar:

Are you seeing it now?

The Trick to Never Confuse Maybe and May Be Again

Again, the easiest way to make sure you're using these correctly is to replay “maybe” with “potentially” and “may be” with “might be.” If the sentence is still correct, you're good. If it's not, then you know you need to change it.

So there you have it. Now you'll never confuse the two again! But just to be sure, let's practice the two with a creative writing exercise.

To practice using maybe and may be correctly, use the following writing prompt

Write for fifteen minutes about the possibility of something that happens at a cookout. Use may be and maybe appropriately as often as you can. Post your practice in the practice box below and leave notes for your fellow writers.