Middle of the Story: 5 Gripping Ways to Revive Your Story’s Messy Middle

I’m not gonna lie: I hate writing the Middle.

For many writers, there is nothing worse than coming up with the Middle of the story. 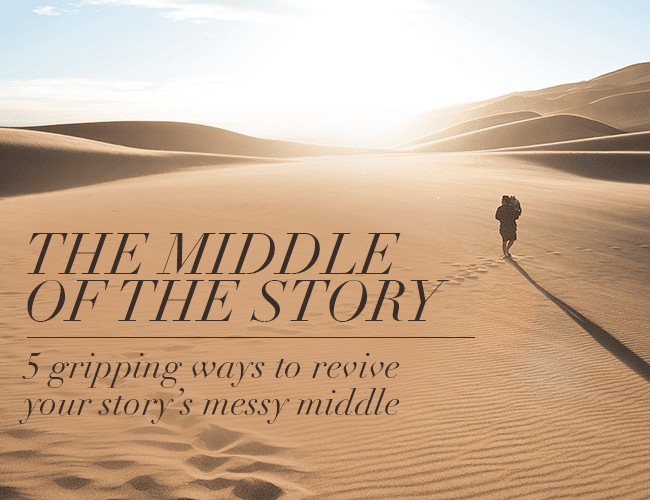 If you’re anything like me, the Beginning is easy. It’s fun to come up with a cool premise for a story. The conflict is there. The goals are plain as day. And getting your protagonist into trouble shouldn’t be too difficult.

The End can seem easy, too. The End of a story is like the candy center of the lollipop — you can’t wait to get to it! Of course you can’t write it yet because you haven’t gotten there, but with each moment of drafting, your heart is dead-set on reaching the end so you can reveal a great twist, kill off a beloved character, or teach a remarkable life lesson.

But for some reason, there’s something about a story’s Middle that’s a pain in the neck.

And like many of you, I’m dealing with it right now.

Stuck in the Middle of the Story

If you haven’t heard, the Winter Writing Contest is happening right now.

Like many of you, I’m hard at work on my story’s first draft. I’m having a blast planning it and sketching out the characters and scenes. I absolutely love this part of the journey.

But that love withers to a weed when I get to that point, about 900 words in, when I realize I’m over-budget on word count and nowhere near the dramatic End I have planned.

I’m stuck in the Middle of the story.

I’m not kidding. As I write this, I’ve decided to put down the draft for a day or two, let it marinate, and write this post instead. I’ve got to write something — so I might as well try and help us all with a problem that can’t be afflicting me alone!

My biggest fear is creating a Mediocre Middle — a trough in the story that merely fills the gap between the Beginning and End that I’ve cooked up. And believe me: As a former writing contest judge, I can testify that stories with Mediocre Middles rarely make it to the winner’s circle. They simply don’t deliver.

So how can we craft something better, something that drives the story forward and propels us to storytelling greatness?

The answer is in creating a Middle That Moves.

5 Strategies to Craft a Middle That Moves

A year back, I wrote a post arguing that Writer’s Block is just a myth, and that what really afflicts us is bad planning.

In hindsight, I wish I had done more then to provide practical tools. The ideas behind it were solid, but we need tangible actions to take when we get hung up in the Middle of our stories, unsure how to bridge the Beginning and the End.

So after a year of growth, I’ve come up with five things you can try today that will breathe life into your story’s Middle. I recommend using just one or two to get the Middle of the story going, so don’t feel any pressure to try them all.

But before we get to those, one rule:

Your End is not sacred.

If you write your story with a sacred, unchangeable End in mind, you will be paralyzed. Your creative freedom and gleeful risk-taking will vanish, all because you’re too afraid to alter the precious End you’ve dreamed up.

Trust me. It’s worth the risk. Let that End go away for a while, and just create.

“
The End you’ve planned for your story is not sacred. Discover where your story takes you.
Tweet this
Tweet

Let’s look at five ways you can draft an awesome Middle That Moves.

This is a risky move. And it’s essential that the character be relevant to the protagonist’s goals.

This is a trick I used to elevate the Middle of my entry to the Summer Contest back in June. By adding a new character, preferably one who will resist the protagonist’s goal, you will add tension and stakes to the story in numerous ways.

Just make sure that character is highly relevant to the protagonist’s pursuit, and will either help or hurt that pursuit. Especially in a short story, you don’t have room for any extra personas.

2. Reveal a hidden piece of information

Key Point: It MUST be information that conflicts with the protagonist’s motivation and goals. Otherwise it’s just fluff.

Make sure it’s a brief, easily consumed piece of information. Don’t dump a massive life story on the reader. Just the essentials.

And make sure it’s something that is revealed for a very good reason, and deeply changes how the characters and the reader will view the protagonist’s goal. Preferably, it alters the motivation and increases the conflict, making the protagonist (and therefore the reader) question him or herself.

This may sound like backward logic, but readers secretly LOVE when protagonist crash and burn. It raises the stakes. It builds suspense.

So let the protagonist fail, and then have to recover in time for a second or third try. Just make sure you don’t write yourself into such an impossible corner that you have to cheat (deus ex machina) to get out of it.

“
Stuck in the middle of your story? Give your protagonist a chance to fail.
Tweet this
Tweet

4. Let a side character make a choice that hurts the protagonist

Two of the most poignant moments in the story of Christ’s passion are the betrayals of Judas and Peter. When a close friend or a treasured ally chooses the wrong side, it adds conflict. The protagonist may be abandoned or further blocked from his/her goal, making the quest for success even more difficult.

Make sure there is a good reason for the character’s choice — you may have to go back to the Beginning and add a line or two that establishes the basis for this motivation.

The Winter Contest’s theme is “Countdown,” and a great way to add conflict and tension is to have the clock suddenly start counting down at double-speed!

This is a common trick in action movies. Depending on the countdown you’ve chosen, it can take many forms: an antagonist changes his plans and arrives earlier; a deadline is pushed up; a major character suddenly has to depart, forcing an early decision.

When time is short, stakes are high. And since you always want to raise the stakes, the Middle is a great place to do it.

Why the Ending Can’t Be Sacred

It’s easy to see how any of these choices can, and will, permanently change the End you have planned.

But it’s important to realize that the End you had in mind never really existed, except as an idea. Any experienced writer will tell you that translating ideas into the written word never works according to plan. Besides, you’ll often find that the original End you had in mind wasn’t so great after all, and that the new one is better!

Writing a story with a riveting Middle is the only way to produce an authentic Ending. I think you’ll be surprised by the End that comes when you bravely write a Middle That Moves. It will be an End that is true to the conflict and believable to the reader.

And heck, you might even find a way to reconcile your plan with reality if you’re willing to think outside the box.

Writing is never easy, and the Middle is where the challenges are often hardest.

But if you create a Middle That Moves, you’ll find those challenges melting away and yielding a story that reaches your audience in powerful, authentic ways.

Do you have any other strategies to add drama and movement to the middle of the story? Let us know in the comments.

Your challenge today is to apply one of these five tricks to add action and interest to the Middle of the story. Is there one that sounds like a good fit for your work in progress? Take fifteen minutes to write that scene.

Or, take fifteen minutes to write a story in which one character betrays another.

When you’re done, share your writing in the comments, and be sure to leave feedback for your fellow writers!