Today’s guest post is by Deena Nataf. Deena is a magazine and book editor with thirty years of experience. Besides her editing, book mentoring, and manuscript evaluation business, she runs BulletproofWriting.com, which helps writers make their mark on the world through hands-on posts on writing techniques, “comedy grammar,” and tips for the writing life.

I’m pretty confident most of you know how to write a decent sentence: subject–predicate, noun–verb. However, when it comes to getting fancy, ambiguity can happen. And you can confuse your readers to boot. 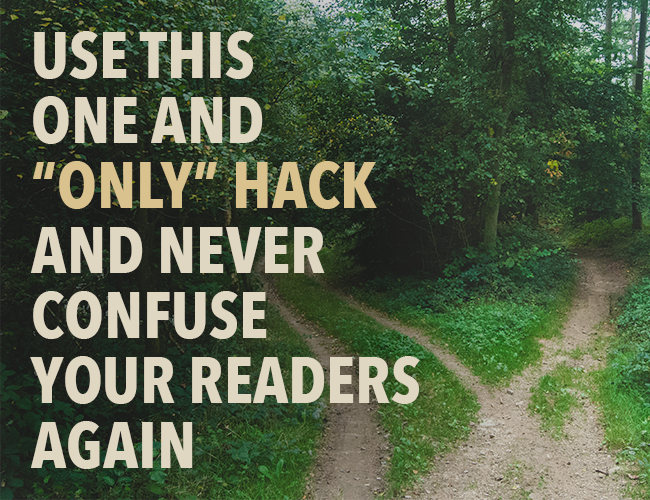 How to Use “Only”

Sometimes it doesn’t matter, as in “I only have one husband” or “I have only one husband.” (Even though the first one is grammatically incorrect and I personally wouldn’t use it, we all know what the writer means.) But how about “Only I have one husband”?

This means that everyone in the whole world except you is a polygamist.

Do the following two sentences mean the same thing?

I went only horseback riding for an hour.

I went horseback riding for only an hour.

Are you stuck? Here’s the rule:

Therefore, in the first sentence, I did one activity during one hour, whereas in the second sentence I might have done all sorts of sports all day long, but as far as horseback riding is concerned, I did that for an hour, no more and no less.

Poor Dave; Jane just wants to be friends. (She doesn’t love him, adore him, or want to marry him.)

Dave has a bit more hope over here, as there don’t seem to be any other men in Jane’s life.

Hmm, that might be a red light for Jane, if Dave doesn’t have any other friends. Maybe she should stay away from this dude.

Now that you’ve got “only” down pat, it’s time to upgrade. The rules for the “both . . . and” combination are basically the same as for “only”: they qualify or modify the word or phrase that goes directly after them. However, there is one extra rule:

The word or phrase that “and” modifies must be the same part of speech that “both” modifies.

Here are some examples:

I enjoy both The Write Practice and Bulletproof Writing.

In other words, there are two blogs that I enjoy. (Notice that both phrases in italics are nouns.)

I both read and enjoy The Write Practice.

I don’t just read it and hit Delete. (The words after “both” and “and” are verbs.)

Both Jane and I read The Write Practice.

We are but two of Joe’s myriad fans. (Jane and I are both nouns/pronouns.)

For more practice, think through these book writing examples:

I am writing a book on both George Washington and Thomas Jefferson.

I am both writing and narrating a book on George Washington.

I am writing a book both on and in the home of George Washington.

Both Jane and I are writing a book on George Washington.

I am writing both a book and an essay on George Washington.

The “either . . . or” combination is a bit trickier, but now the fun begins.

Although the “both . . . and” rule applies to “either . . . or” as well, writers tend to get all weird about “either . . . or,” complicating matters unnecessarily. Just remember that “either” and “or” both qualify the word directly following them and need to be the same part of speech, and you’re good to go. Check these out:

What a nice mommy! But a bit of a sucker, don’t you think?

Either you eat your peas or you throw your peas.

Well, that’s true for most children under the age of two. But you’re seventeen, so it’s not so nice.

You either eat your peas or throw your peas.

This is a slight modification of the previous example. Because the pronoun “you” comes before the word “either,” we don’t have to repeat it on the other side of “or.”

You eat either your peas or my peas.

Sneaky mommy; she doesn’t want her peas either, and is hoping to fob them off on you.

You eat either your peas or your liver.

I don’t mean your physical liver, of course, just the brown stuff on your plate. But if you don’t eat something, I will eat your heart out.

Well, there you go; easy-PEASy, right? Grammar doesn’t have to eat your heart out, or even your liver. You can absolutely nail it with just a few hacks. Good grammar helps you get out of your own way, making your prose clearer and allowing your personal voice to shine through.

Does learning grammar send chills up and down your spine? Do you have any hacks that make learning the rules easier? Let me know in the comments section.

For fifteen minutes, pretend you’re a high school football coach dressing down your team for a poorly played game—in the semi-finals. Read them the riot act and throw in a few ultimatums, using “only,” “both . . . and,” and “either . . . or.” Paste your piece below in the comments, and leave feedback for your fellow writers.