by The Magic Violinist | 12 comments

I love Pixar. There hasn’t been one movie they made that I didn’t like. My family goes to see the new Pixar movie every summer right after it comes out. 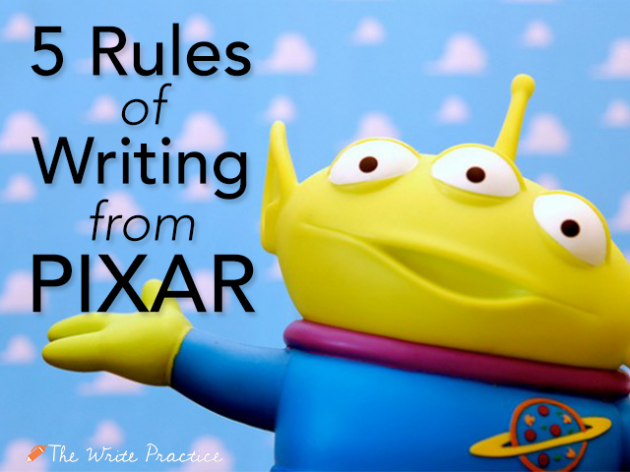 So when I saw this picture on Pinterest sharing Pixar’s twenty-two rules of storytelling, I saved it right away, and I go back to it constantly for inspiration.

With that in mind, I thought I’d share a few of my favorite rules with you. Here are my five favorite writing rules from Pixar:

1. You gotta keep in mind what’s interesting to you as an audience, not what’s fun to do as a writer. They can be very different.

While you might enjoy going deep into the history of the home your character’s living in or write an entire chapter from the cat’s point of view, the reader might not care. They might even get bored. Read everything you write like someone else wrote it. Pretend it’s a book you found stashed away at the library. Would you keep reading it? Is it interesting? Do you care?

2. Putting it on paper lets you start fixing it. If it stays in your head, a perfect idea, you’ll never share it with anyone.

This is one I struggle with.

Even though I recognize how extremely important it is to edit, I can’t deny that I hate it.

Which is why I often end up getting stuck and refusing to move on, because I can’t think of a good way to progress the story without having to fix it later.

Of course this is ridiculous, but sometimes I need a reminder that it’s okay to write fast and write messy. Otherwise nothing would get done.

3. Discount the 1st thing that comes to mind. And the 2nd, 3rd, 4th, 5th—get the obvious out of the way. Surprise yourself.

My characters surprise me all the time. If I have something planned for them, they usually change it.

They lead me on the journey instead of the other way around, and the story ends up better because of it. Plus, this is a great way to avoid clichés.

Usually the first thing that comes to my mind has been done a thousand times before, which is why going for a little detour is sometimes the best thing you can do for your story.

4. No work is ever wasted. If it’s not working, let go and move on—it’ll come back around to be useful later.

I can’t tell you how many novels I’ve started and ended up stopping halfway through. It can be discouraging. I had such a great idea to start out with, only to find that it came to a dead end, or I’d only thought of the idea because I’d read a book exactly like it not too long ago.

But, you should never ever ever throw it away. Ever. I’ve turned many of these novels into short stories, and they turn out much better. I’ve borrowed characters from one world and thrown them into another. Plot twists that may seem obvious in one book throws your readers for a loop in another.

Read some of your old work, take it apart and create something new, something unique. It’s so much fun.

5. Why must you tell THIS story? What’s the belief burning within you that your story feeds off of? That’s the heart of it.

How did you get this idea in the first place? Did it come to you in a dream? Is it based on something that happened to you years ago? Did the protagonist start talking to you and refused to go away?

Go back to that initial excitement, that new story buzz. You know the feeling. We’ve all had it at some point. The burning anticipation that distracts you from your current project because it’s demanding to be written. Go back to that. Let that excitement seep into your story. The readers will feed off of it. It’s infectious. That’s what makes your story special. That’s why you’re writing it.

What are some of your favorite rules of storytelling? What’s the best piece of advice you’ve ever received about writing? Share in the comments!

Pick one of the above rules and put it into action for fifteen minutes. The story can be about whatever you’d like, as long as it applies to that rule. When you’re finished, if you want to, post it in the comments. Be sure to give your fellow writers some love, too!