This Simple Principle Will Solve Your Show, Don’t Tell Problems

This guest post is by Tom Farr. Tom is a storyteller, blogger, freelance writer, and high school English teacher. He loves creating and spending time with his amazing wife and three children. In addition to blogging regularly about writing at The Whisper Project, his writing has appeared on LifeHack.org and Medium.com. Follow him on Twitter (@farrtom) for updates on what he’s working on next.

No doubt you’ve heard the old writing advice, “Show, don't tell.” But how do you do it, and how do you balance the showing versus the telling?

Today I’m going to share with you a simple strategy for deciding what you should show in your writing and how to approach it. 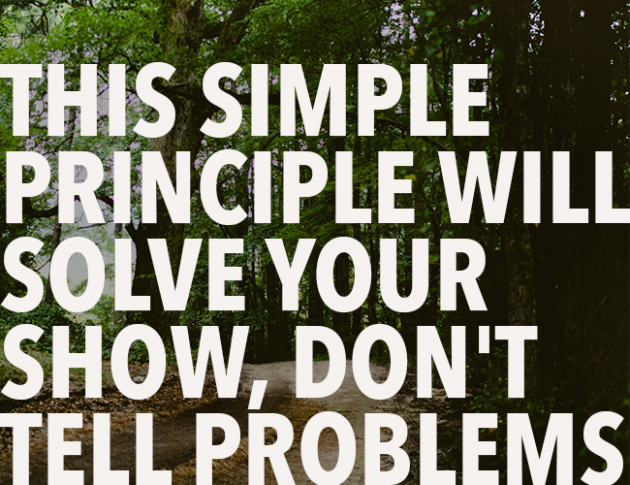 The Art of Immersing Your Reader in a Story

The goal of show, don't tell in your writing is to create an immersive experience for your reader. You want them to be so caught up in your story that they feel like they’re experiencing it for themselves.

It was raining when Claire stepped out onto the driveway.

Pretty straightforward. But aside from Claire stepping out onto the driveway, it doesn’t really engage the imagination. Of course, we know what rain looks like.

But what if I did it like this instead?

Claire felt the cold sloshing of water in her shoes as she raced to her car in the driveway.

This sentence paints a more vivid picture in the reader’s mind of what’s going on. Notice there’s no mention of the rain falling down, but the description of Claire’s shoes filled with sloshing water as she runs implies the rain pouring down.

In order to create a more immersive experience for your readers, you want them imagining your story as they’re reading it, which is why it’s important to show, don't tell.

To Show, Don't Tell, Focus on Effect Not Cause

If showing is so important, why then do so many writer's get stuck telling?

In any given scene, you may describe any number of things you're not even really thinking about. In the example above, it was so easy to say that it was raining when Claire ran to her car. If you were the writer of that sentence, you may not even be thinking very clearly about the rain. It was just something to mention in passing.

However, while you might not be thinking about the rain, Claire, your character, certainly is. That's why the second example is stronger, because it moves from the simple fact that there is rain, to describe the effects produced by the rain (i.e., the cold sloshing of water in her shoes).

When you just mention causes in passing, you miss the opportunity to engage your readers’ imaginations. And if you're not engaging the imagination, it’s only a matter of time before a reader stops reading.

So how do we put this into practice?

Once you get the hang of show, don't tell, you’ll begin to do it instinctively, but when you’re first trying to develop a more immersive writing style, it's easy to tell too much without noticing.

To develop an eye for telling, look for anything in a scene where you described a cause without moving onto its effects.

This is actually much easier than you think. Below are several examples of what you’re looking for. Note that all of them have something in common:

Did you catch the common element in each of these examples? Each included a form of the verb “to be,” i.e., is, are, was, and were. These aren’t action words, and because they’re not action words, they reduce your writing to telling rather than showing.

2. Use Sensory Language to Describe Effects 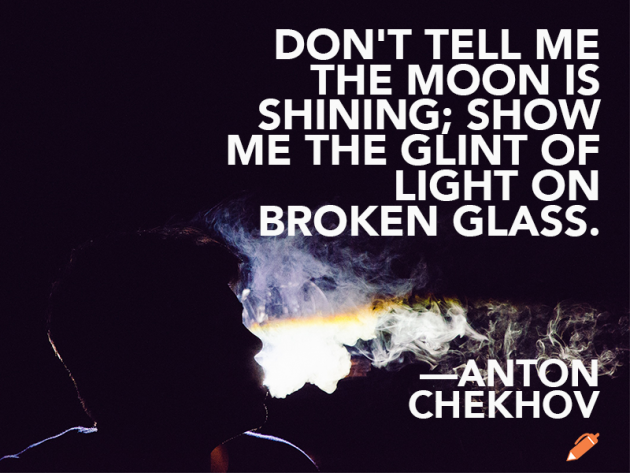 Anton Chekhov once said, “Don’t tell me the moon is shining; show me the glint of light on broken glass.”

In the example above, instead of telling you it was raining, I mentioned the cold sloshing of water in Claire’s shoes that was the effect of the rain.

Sensory language is the key to telling because it allows readers to imagine what’s going on in the story.

Imagine a character smelling the aroma of a mocha cappuccino and the steam rising to their face, soon followed by eyes closing and a slight smile.

This is the power of engaging your reader’s imagination and creating an immersive story experience.

What story have you read that uses description well? Share in the comments below.

Spend fifteen minutes writing a scene in which you describe effects without mentioning their causes. Here are some causes to include to get you started:

When you’re finished, post your practice in the comments below. If you share a practice, make sure to comment on the practice of other writers as well.