Show, Don’t Tell: The Secret to Great Writing with Show and Tell Examples

You've heard the classic writing rule, “Show. Don't Tell.” Every writing blog ever has talked about it, and for good reason.

Showing, for some reason, is really difficult. Yet, it's also one of the most important writing techniques you need to master if you want your own writing stand out. 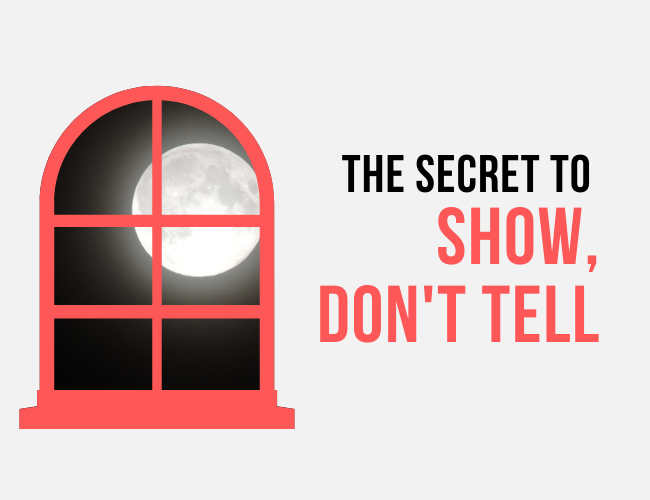 Telling is one of the hardest habits to eradicate from your style. I still struggle with it regularly. However, writing that shows is so much more interesting than writing that tells. Most of the time.

In this article, you'll find the definition of “show, don't tell,” see several show don't tell examples, and learn the one simple trick to strengthen your writing style.

What is Show, Don't Tell?

This is especially a popular piece of advice given to new writers, who often tell too much in their description (and often include unnecessary backstory or adverbs, which slow the story's pace and take the reader out of the moment).

The descriptive language makes the experience visceral for the reader, which allows them to imagine what a character experiences in real time for that character. Because of this, it's more likely that the reader forgets that they're reading—a goal fiction writers (and all writers) want to achieve.

As Anton Chekhov said, “Don’t tell me the moon is shining; show me the glint of light on broken glass.”

(Note: even though you'll see the above quote frequently, it's a bit of a miss-quote. Here's what Chekhov actually said.)

How do you “show, don't tell”? The good news is that it's pretty easy to show if you just learn this one trick:

The simplest rule to remember if you're trying to show is just to write specific details. Specificity will fill in the gaps from your telling and bring life to your scenes. Let me give you an example of how being specific will help you show.

They went to New York to see Cats. They both enjoyed it very much. When they tried to go home, their flight was delayed because of the snow so they stayed another night and decided to see the musical again.

That's a fun story. A great trip to the city could be ruined by the weather, but they make the most of it.

It's all pretty vague, though, isn't it?  Who are they? What theater did they see Cats at? Why did they enjoy it?

To show rather than tell, you have to interrogate your story. You have to be more specific. Better yet, you'll use strong verbs to show what a character does, feels, and experiences.

Here's that example with some of those questions answered:

Tanya and James flew to New York city in a 747. They got their bags, took a taxi to their hotel, and checked into their rooms. “I can't wait to see the show,” Tanya said. “You're going to love it.”
James shook his head. “I don't get it. It's about cats who sing and dance? Sounds sorta dumb.”
Tanya smiled. “Just trust me.”
Their hotel was just a few blocks from the Foxwoods Theater so they walked. He had never seen buildings so tall or so many people walking on the street. When they got to the theater, Tanya noticed his eyes were a little wider, his mouth a little slacker. The foyer was covered in gold and white marble, with hundreds of people milling around in gowns and beautiful suits. He didn't talk much. Finally, they took their seats, and the lights went down. He took her hand.
….

Let's stop there. Once you get specific your story can get a lot longer. The word count goes up, which isn't always the direction you want it to take.

But overall, at least in this example, the showing is a little better than the blander, tell-y paragraph.

Instead of “they,” we now see Tanya and James. We know a little more about them, that Tanya is a little more cultured, while James is more wary of it. We get a glimpse of the theater.

The second example does a better job at sticking in the reader's mind. The reader gains an emotional attachment to the story in a way the previous example did not.

There's still more room for specificity, though, which is why you always have to interrogate your story.

What was their flight like? Why is James so awed by New York? What's the nature of their relationship?

Here's another example with some of those questions filled in with specificity:

Tanya and James flew to New York in a 747. Tanya drank club sod and James had ginger ale. “Can I have the whole can?” he said. When they in LaGuardia, James turned to her and said, “Just so you know, that was the first time I've ever flown anywhere.”
“What?” said Tanya. “Why didn't you tell me?”
“I didn't want you to know I hadn't left Oklahoma.”
She took his hand and kissed it and held it to her cheek.
“I'll still love you, even if you are an Okie hillbilly.”
They both smiled and he kissed her.
….

That's definitely more specific, but it's also getting longer. We haven't even gotten to the theater yet.

And what that means is that while “show, don't tell” is often good advice, showing isn't always appropriate. Instead, keep in mind this alternative advice:

Show and Tell: When to Show and When to Tell

Sometimes, showing isn't appropriate for your writing. Sometimes, if you want to write a great story, you have to tell.

“
Not sure when to show, not tell in your writing? This post will SHOW you what to do with writing tips and examples that you can easily adapt into your writing.
Tweet this
Tweet

In other words, show if the scene is exciting, dramatic, story-advancing, character-developing, and altogether interesting. Show if the character has an emotional experience in the scene—or if you want to ground the reader in the character's POV.

In other words, tell if the scene is boring, non-pivotal, not dramatic, and mostly exposition or informational.

I include an infographic that breaks it down visually below. Scroll down for a creative writing exercise to put this concept to use immediately.

How to Find the Write Balance Between Show, Don't Tell

How do you find the write balance between showing vs telling details?

You can get infinitely more specific, but the consequence of specificity is length.

While you should want to be more specific, to show more than you tell, you'll need to cut the detail that doesn't add to your story.

If you want to be a better writer, make show and tell a natural part of writing.

To do this, be specific, but don't bore us.

How about you? What do you think is the right balance between showing and telling details? Let me know in the comments.

Write for fifteen minutes. When you're finished, post your practice in the practice box below.

And if you post, please give some feedback to a few other writers. I hope this is a community that helps each other improve.