How to Harness the Power of Subtext 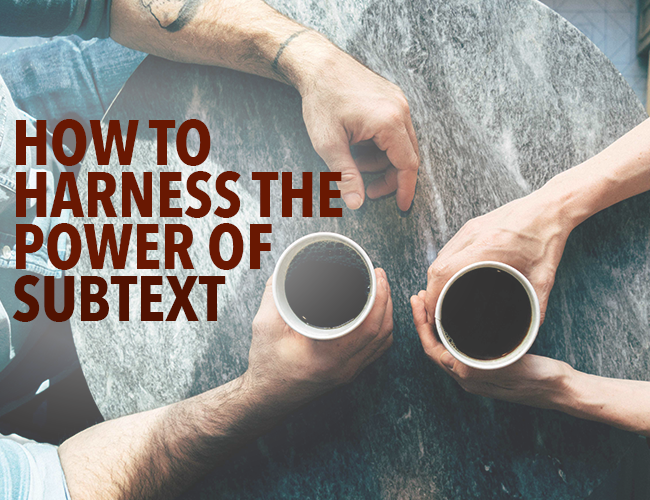 Subtext is the message sent beneath the words we say. It can be carried by nonverbal cues, such as eye-rolls or silence, but it's strongest when the spoken words are confounded, complicated, or subverted by the message implied. We sometimes call this “reading between the lines,” but how do we write between the lines?

How do I write subtext?

Start with a character in conflict. If your characters are blissfully married, and nothing is going to interrupt that happiness, there’s no conflict or need for subtext (or the scene, likely). Begin with a strong scene (a character who desperately wants something, but can’t get it).

Once you have a strong scene, think about how the setting can heighten the stakes and create subtext. Then create dialogue and action that indirectly expresses the characters’ messages, emotions, and needs.

Subtext in The Great Gatsby

The Great Gatsby is set in the 1920’s during a sweltering hot summer in New York. In chapter 7, some friends have lunch at Tom and Daisy Buchanon’s mansion, including Gatsby (Daisy’s lover), his neighbor Nick, Daisy, Tom (Daisy’s husband), and Jordan (Daisy’s friend).

Unbeknownst to Tom, Gatsby and Daisy have been having an affair (everyone else knows), and Gatsby expects Daisy to tell Tom she never loved him after lunch. Repeatedly, everyone complains about the heat. Subtext shimmers beneath nearly every exchange, as Daisy gets more agitated by the minute.

“Who wants to go to town?” demanded Daisy insistently. Gatsby’s eyes floated toward her. “Ah,” she cried, “you look so cool.”

Their eyes met, and they stared together at each other, alone in space. With an effort she glanced down at the table.

“You always look so cool,” she repeated.

She had told him that she loved him, and Tom Buchanan saw. He was astounded. His mouth opened a little, and he looked at Gatsby, and then back at Daisy as if he had just recognized her as someone he knew a long time ago.

“All right,” broke in Tom quickly, “I’m perfectly willing to go to town. Come on—we’re all going to town.”

First, think about what is being communicated by analyzing the context, message, emotion, and need. Everyone feels trapped by the heat and each other. When Daisy asks, “Who wants to go to town,” she is desperate for a diversion from the task at hand (telling Tom she’s leaving him). The strongest subtext, though, is her statement to Gatsby, “You always look so cool.”

Her message: I want you.

Her need: To say it without directly jeopardizing her security with Tom or overstepping propriety (if there’s any such thing in this novel)

Fitzgerald has the narrator explicitly translate the subtext (“She had told him that she loved him”), but it may not have been necessary. Tom’s reaction and interruption make it clear he knows the truth.

When you begin watching and listening for subtext in your favorite books, shows, and films, you will see it everywhere. (All innuendo is subtext, by the way.)

Once you have a character in conflict, consider how you can send a nuanced message using the context, message, emotion, or need. Take each component and figure out different ways to communicate it.

Let’s say I have a couple in an apartment rehashing an old argument about having children.

The context is an apartment. Is this the best setting for the exchange? How would moving it to a public location change what is said?

What if I complicate the setting through changing the conditions, such as having the water heater or air conditioning break? What if his critical mother is present? Any of these details will impact the subtext.

If the woman's direct message is “I want a baby,” I might make a list of ways she could talk around it or use a keyword (like “discuss things” or maybe he's referred to it as “the problem”). For a master class on this method, read Hemingway's “Hills Like White Elephants.” (I'll give you a hint: they are fighting about an abortion, but the word is never spoken aloud.)

The emotions of the woman in our scene? Longing and frustration. Instead of stating, “She longs to be a mother,” how can I show it? What will she notice because she longs for a baby? How will it translate into her body language?

What other emotions are present? How does the man feel and how does he show it? Pitting characters' emotions against each other in a scene can be powerful.

Her need? She needs to know if he's changed his mind without scaring him. Why is knowing the need important? Because it can alter the way we approach a discussion.

In The Godfather, Corelone's need is to reassure Johnny that he has everything under control, so he uses understatement (“I'm gonna make him an offer he can't refuse”). If he needed to display power? He'd use different words and body language.

The water had stopped gushing from the pipe under the sink, pooling on the kitchen's cracked linoleum. Joan threw towels on the floor to begin mopping up the water.

“I'd still like to discuss things,” she said, wrapping her arms around her waist.

“We always discuss things.” He snatched the towels closest to him and threw them in the sink. She flinched at the spray of water. Bottle in hand, Greg slammed the refrigerator shut. “I'm tired of discussing things.”

From the kitchen, she saw him flop on the couch and kick off his shoes. Joan turned to the sink to hide her tears.

“A couple with a dog moved in downstairs. Did you see them?”

“I don’t want a baby. I’m never gonna want a baby.” He took a long swig and flipped on the remote.

“They were chasing it together. The dog had the cutest polka-dot collar. I hope it didn’t get lost.” He didn't respond. She wrung a towel until her knuckles were white. Dropping the towel in the sink, she shook off her hands, and headed to the bedroom to grab her packed suitcase.

She’s ready for a family. He understands her real message and answers her. What else does the subtext do that a direct statement wouldn’t? It shows her longing in a vivid way.

She’s chasing motherhood, like the couple chased the dog. Her observation that the couple chase the dog “together” contrasts how she feels about her own relationship. It shows the difficulties of discussing sensitive subjects.

The indirect communication creates a richer experience for the reader because meaning is happening on multiple levels at once.

My first drafts of dialogue need significant revision. Sometimes my characters say too much, sometimes they sound too much like me, and sometimes they’re too direct.

Subtext can help. You might not need it in every single exchange, but subtext enriches our stories in so many ways. My first attempts are often too obvious and clumsy, but with practice, I can find subtle ways to include subtext that will surprise and delight readers.

Have you seen great examples of subtext in books or film? (Alfred Hitchcock is one of my favorites.) How could adding subtext improve your dialogue? Share in the comments.

Take fifteen minutes to choose one of the lines below (or make up one of your own) and work it into two different short dialogue exchanges, each with different subtext.

“Can you spare some change?”

If you get stuck, here's a tip I give students: Imagine the line in different genres. Any line spoken in the context of a horror story will likely have a much different meaning than when spoken in a romance.

When you're done, share your practice in the comments and encourage each other.