How to Study Subtitles to Write Better Dialogue

Today's guest post is by Andrew J. Stillman. Andrew is a fantasy author, freelance writer, and travel blogger who encourages people to reach for the stars. He can be found making up stories and studying writing at andrewjstillman.com, hired at andrewjwrites.com, or traveling the world at andrewjtravels.com.

What if I told you that you can become a better writer and watch your favorite shows and movies at the same time—and all you have to do is turn on the subtitles? 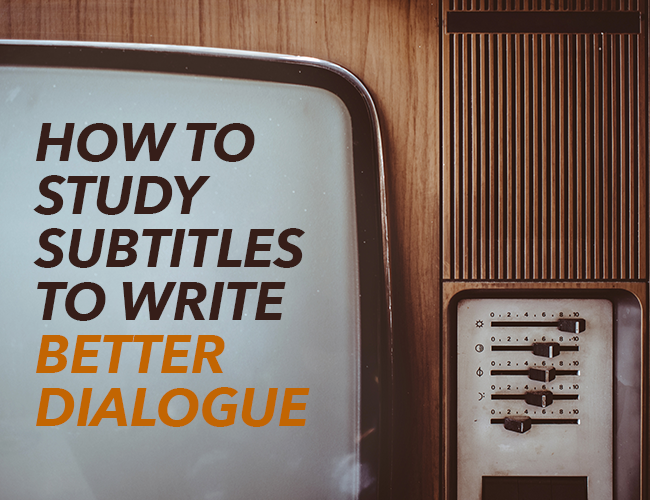 Most writers agree that we should learn from watching film. How can we, as writers, study it to create more fluid and in-depth scenes?

We can start with the dialogue.

How Film Can Teach You to Write Great Dialogue

Many writers struggle with dialogue. We wonder how to make it real, make it believable, and make it stand out.

Of course, the words characters speak are vital. But as we get lost in finding our voice, we sometimes forget that it’s not only what characters say that matters: how they say it is just as important.

One of the great advantages of film is that the delivery is built right into the dialogue. Studying movies with the subtitles on can help you learn how to write powerful words and engaging scenes.

Try it yourself: choose one of your favorite television shows or movies and throw on the subtitles. As the scene progresses, pay attention to the intonation, tones, and expressions the actors use to convey their lines.

The subtitles alone often look boring or bland, but paying attention to the way the lines are delivered can help you fine-tune dialogue of your own.

Let’s try an example together using the show Gilmore Girls (expected to re-launch on Netflix before the end of the year, just in case you didn’t know), which is known for its clever dialogue.

Check out this scene from the episode “Eight O’Clock at the Oasis,” the fifth episode of the third season. As you read the subtitles, watch how quickly the lines come and go, how much information is delivered, and how casually the characters make it flow. Afterward, let’s see how the dialogue helps us paint the entire scene.

For this example, let’s assume the reader is already familiar with the characters and setting (although you could always add detailed descriptions of each). Focus only on crafting the scene around the dialogue. Let’s take a look at the scene's transcription, with no added detail, starting from the time Lorelei and Rory sit at Luke’s counter to discuss the parents (0:44 seconds in):

“I guess we counter it.”

“What do you know? Your face really can freeze that way.”

“Yeah, the place is packed.”

“I never wanna hear that come outta your mouth again.”

“Every weekend, the same stupid group comes in here and take up all my tables and every chair they can get their sticky hands on. And they do that. They sit, they stand. One person holds a kid, another person holds a kid.”

The lines tell a story of their own. But without any added character actions or dialogue assignments, this reads as mindless, incoherent babble.

Intonation, facial expressions, and body language are an integral part of making the dialogue convincing and real.

With that, let’s take a look at the scene again. This time, describe the events as they occur (using the present tense) to help flesh out the scene. Remember, the audience already knows where we are and who we’re with.

Lorelei opens the door to Luke’s, where a large group of parents have taken over the small diner. “Man, it’s packed in here.”

“I guess we counter it,” says Rory.

They both make way to the counter, where a very aggravated Luke greets them with a, “What?”

As he sets coffee mugs in front of them, Lorelei says, “What do you know? Your face really can freeze that way.”

While Luke pours them each a coffee, he sarcastically says, “Yeah, I’m fine. I’m great. It’s a big, fat, happy sunshine day for me.”

Rory’s voice gets higher as she says, “Oh, look, babies!”

Lorelei immediately turns to her and says, “I never wanna hear that come outta your mouth again.”

One of the mothers stands holding her child in the corner by the window. She looks down at her husband and says, “Bob, the yellow ball.”

With a glare, the woman snaps, “Ball.”

Luke lowers his own gaze, glaring. “Every weekend, the same stupid group comes in here and takes up all my tables and every chair they can get their sticky hands on, and they do that! They sit, they stand. One person holds a kid, another person holds a kid.”

Another father approaches his wife with a toy train, and says, “I’ve got choo-choo Joe,” as he kneels down next to her and the baby.

The scene is filling in nicely, but writing in the present tense—especially in a third person narrative—isn’t a common choice. While you can edit what you’ve already done in the present tense, let’s take a look at how this might be written if it were a scene in a book:

When they arrived at Luke’s, Lorelei opened the door to see that a large group of parents had overtaken the small diner. “Man, it’s packed in here.”

“I guess we counter it,” said Rory.

They both made their way to the counter, where a very aggravated Luke greeted them with a, “What?”

As he set coffee mugs in front of them, Lorelei said, “What do you know? Your face really can freeze that way.”

“Are you okay?” asked Rory.

While Luke poured them each a coffee, there was no masking his sarcasm as he said, “Yeah, I’m fine. I’m great. It’s a big, fat, happy sunshine day for me.”

The pitch in Rory’s voice rose as she said, “Oh, look, babies!”

Lorelei immediately turned to her and said, “I never wanna hear that come outta your mouth again.”

A mother stood standing in the corner by the window, cradling her child. She looked down at her husband, who sat at the table, and said, “Bob, the yellow ball.”

With a glare, the woman snapped, “Ball.”

Luke lowered his gaze in a glare. “Every weekend, the same stupid group comes in here to take up all my tables and every chair they can get their sticky hands on, and they do that! They sit, they stand. One person holds a kid, another person holds a kid.”

Another father approached his wife with a toy train. She held the baby, and he cooed, “I’ve got choo-choo Joe,” as he knelt down next to them.

Now the dialogue has become a full scene with believable words and vivid description. By breaking apart the scene and then building it up again, we see how the dialogue impacts the story on its own, and also understand how to craft the scene as a whole around it.

The next time you write a scene that’s heavily driven by dialogue, remember to use it only as a basis for what’s going on. If you build around how the characters deliver their lines, you can write a vibrant, full, and comprehensive progression of the events as they occur.

Is dialogue a roadblock for you? What other methods do you use to polish it? Let me know in the comments.

Choose one of these practice exercises and take fifteen minutes to write.

Take a look at this scene from Friends, or feel free to choose your own. Write out the subtitles as they appear throughout the scene on your first watch, giving no character descriptions or dialogue assignments. Watch the scene a second time and fill out what’s happening around the dialogue. Then, fine-tune it as if it were a scene from a novel or short story.

Take a scene from your current work in progress and rewrite it with only the dialogue. Think about the way your characters are behaving as you reread the dialogue. If it were a film, what would you be seeing? Flesh out the scene from there.

Share your practice in the comments below. And if you share, please remember to leave feedback for your fellow authors!