This guest post is by Jeffrey Whitney. Jeffrey is a carpentry student who writes in his spare time. His novel in progress, about four families dark secrets who live in a mythical town in the midwest, is coming out soon. Thanks for writing with us today, Jeffrey!

Want to write good dialogue? Then you’ve got to break the rules. 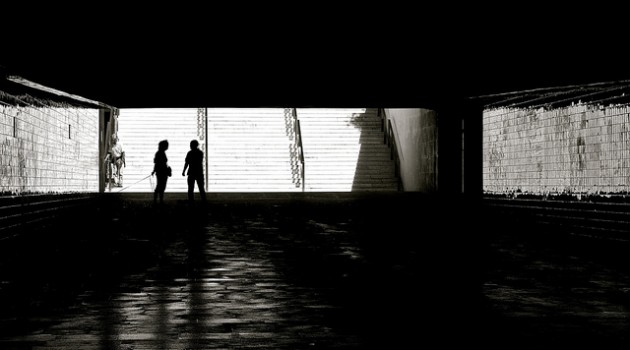 When you and I talk, we sometimes break the rules of grammar. (I know, it’s a shock, but it’s true.) To write good dialogue, it’s not so much that we are breaking the rules, per se, it’s just that there are rules for dialogue that trump grammatical dogma.

Rules differ. “No white after Labor Day” probably doesn’t apply in Moldova. In fiction, the rules for action and exposition differ from the rules for dialogue. That’s because what we are trying to achieve is different depending on which side of the quote mark we’re are on.

The Purpose of Action and Exposition

The purposes of action and exposition are to lead the reader through the book with as little friction as possible. Our job is to make the reader forget they are reading, to convey impressions— the words are just the vehicle.

There are lots of rules to follow when writing, but let’s focus on a couple of the obvious rules that don’t necessarily apply to dialogue. I’ll pick two:

To begin with, you usually want your sentences to be sentences. You want your commas in the right places, you want your subjects and objects to agree, and you don’t want to dangle your participles, etc. You can use sentence fragments as long as you don’t overdo it; but you need to know the rules of grammar before you can break them effectively.

You want to avoid the use of cliché’s. Cliché’s are bad because they’re boring; they weigh down the thrill and freshness of the story. This doesn’t apply only to words. If the reader can tell what’s going to happen, why should they read the story?

The Good News For Rule Breakers

The good news for those of who don’t like rules, is that their jurisdiction ends the moment you insert a quotation mark. The quote is like the county line of grammar enforcement.

There are two main rules for dialogue, and they are simple.

As long as you don’t overdo the apostrophes, the first rule is easy. None of this: “’Eer! What a ‘ewe fink ‘ur doin’ on de master’s prop’ty?’” If the reader has to run through the line four times just to understand what you’ve written, then you’ve just knocked them out of the air and reminded them that they’re reading a story.

The second rule of dialogue is where the fun begins. Sentences like, “He got fired,” and, “I left cause I didn’t like her,” might make a grammarian cringe, but they are exempt, because that’s how some people talk. People use clichés like “black is the new pink” or “I am so over what's-his-face” all the time. Your job is to make sure that the dialogue doesn’t sound off-key. If the dialogue feels stilted, it’s like watching a B-Movie actor, and your readers will want to change the channel.

How to Write Authentic Dialogue

Listen to how people talk. Write down blotches of conversations that you overhear. If you need to, picture a character as someone you know. Your character doesn’t have to look like this person, or have the same experiences, but you can make ‘Ted’ sound just like your Uncle Dave.

Do you break the rules, using cliches and bad sentence structure, when you write dialogue?

Write a scene where two people are talking. Don’t describe them, but make them different from each other. Perhaps, one is educated and the other isn’t. One is old and one is young. Use only dialogue to tell us who they are, and break the rules of grammar as long as the dialogue sounds real and is readable. If you want, you can make one or both of the people sound like somebody you know.

Write for fifteen minutes and post what you write in the comments section.