What Is an Epilogue? And Is It Okay to Use One in YOUR Book?

You know you’ve seen it at the end of a book, but what does it mean? What is an epilogue actually? Why not just call it, “Last Chapter”? Who thought up this word, “Epilogue,” anyway? And if you’re a writer, should you end your book with one?

When I was working on my latest book, Crowdsourcing Paris, I had a decision to make. It was a make or break choice, and if I chose wrong, I could easily ruin my book.

My dilemma? How would I write the ending.

Should I write an epilogue? An afterword? Or just write “The End” after the last chapter?

It was a tough decision, and I hope I chose right. The good news is that readers seem to love the ending and the reviews have been incredibly positive (4.8 of 5.0 stars on Amazon currently).

So what is an epilogue, what is an afterword, and how should you end your book? Read on for the mechanics of how to write the ending of a novel or memoir.

Hey writer: Here’s an easy checklist of when to use an epilogue in your book. Download it here.

What Is an Epilogue?

An epilogue is a chapter that ends a novel or memoir. It’s often moment when the reader learns the final fates of the characters or when the hook for a sequel is revealed. Not all novels and memoirs have epilogues, but the ones that do tend to be shorter than other chapters. They are also usually different in tone, point of view, or time period versus other chapters in the book.

“
An epilogue is a chapter that ends a novel or memoir. It's usually different in tone, point of view, or time period versus other chapters in the book.
Tweet this
Tweet

Epilogues appear in novels, memoirs, and also in films. Here are some epilogue examples from a variety of stories:

During the ending credits scene of The Avengers, we see the heroes eating at a ruined schwarma shop in New York City. (In fact, any ending credit scene in a Marvel film would be an example of an epilogue, and often there are two!)

2. Harry Potter and the Deathly Hallows by J.K. Rowling

In The Deathly Hallows, the final novel in the Harry Potter series, there is an epilogue titled, “Nineteen Years Later,” which is about the children of Harry, Ginny, Ron, Hermione, and Draco as they leave platform 9 ¾ for Hogwarts. 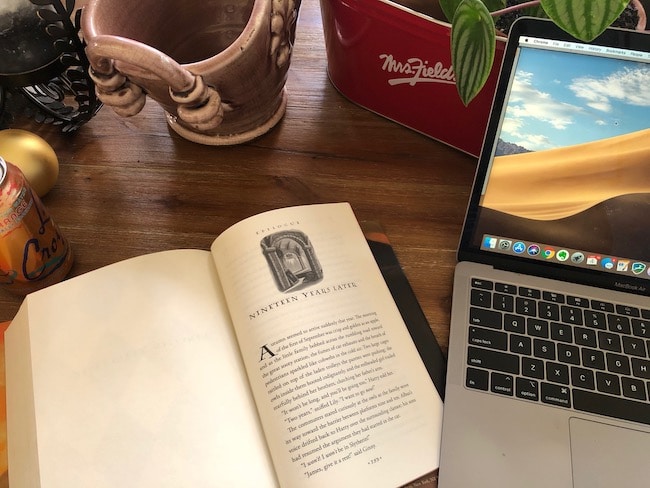 The epilogue from Harry Potter and the Deathly Hallows is titled “Nineteen Years Later.”

Shakespeare used many epilogues in his plays, including Puck’s final monologue in A Midsummer Night’s Dream, the Prince’s final speech in Romeo and Juliet, and Rosalind’s final speech in As You Like It, when she says:

I charge you, O men, for the love you bear to women—as I perceive by your simpering, none of you hates them—that between you and the women the play may please. If I were a woman, I would kiss as many of you as had beards that pleased me, complexions that liked me, and breaths that I defied not. And I am sure as many as have good beards, or good faces, or sweet breaths will, for my kind offer, when I make curtsy, bid me farewell.

While not explicitly titled one, the final short chapter in Les Miserables by Victor Hugo functions as an epilogue, as it reveals the grave of the protagonist, Jean Val Jean, ending with the epitaph:

He sleeps. Although so much he was denied,
He lived; and when dear love left him, died.
It happened of itself, in the calm way
That in the evening night-time follows day.

Now that we’ve seen some examples to get a clear idea of what an epilogue is, let’s talk about the origins of epilogues and whether you should use one in your book.

The groundbreaking science fiction novel Neuromancer by William Gibson ends with an epilogue titled, “Coda, Chapter 24: Departure and Arrival” (Coda is the equivalent to an epilogue in music—see below). 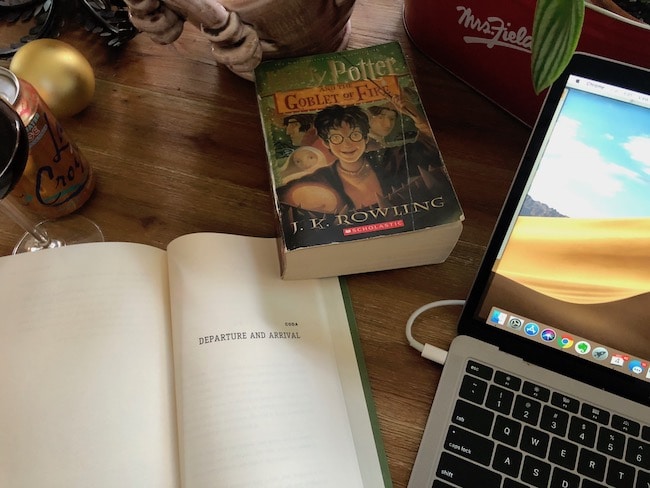 The epilogue of Neuromancer is titled Coda: Departure and Arrival. Coda is the musical equivalent of an epilogue.

Epilogues have their origin in ancient Greece, not in drama but in classical speeches. In fact, it was one of the four components of a speech, according to Aristotle:

The word epilogue comes from the Greek word “epi,” meaning “in addition,” and “log,” meaning “word.” It’s literally “additional words” tacked on to the end.

How do epilogues compare to other endings, like afterwords, conclusions, outros, and codas? Let’s talk about that next.

An afterword is a final note from the author and is different than an epilogue because it’s in the author’s own voice, rather than from a narrator or character.

An afterword may comment on the story or it may talk about the context in which the story was written. However, it is always outside of the narrative itself, and it is always from the author’s point of view.

Epilogue and outros function the same, but epilogues tend to be used in reference to novels and memoirs, and the word “outro” is usually found in the context of television or video games.

In a musical, the term for an epilogue is coda, which means “tail” in Latin. In the example above, William Gibson calls his final chapter a “Coda” as another, creative way of calling it an epilogue.

Should You Use an Epilogue?

The answer: if you want to!

When it comes to choosing how to end your novel or memoir, you have two main options:

Plenty of great novels and memoirs end with a final chapter and plenty end with epilogues.

In fact, I did an informal survey of ten of my favorite books on my bookshelf. Two had explicit epilogues, three had chapters that acted as epilogues (in that they jumped forward in time to reveal the fates of the main characters outside the normal narrative structure), and five did not have epilogues. When it comes to writing an epilogue, it’s really up to you.

Here’s a checklist that you can use when you’re deciding whether to use an epilogue in your writing.

Should I Use an Epilogue: A Checklist

Here’s when it’s officially okay to use an epilogue:

While epilogues are somewhat interchangeable with final chapters, epilogues tend to be shorter; different in tone, style, or point of view; and/or may be a jump ahead in time from the rest of the narrative. If your ending fits any of these, feel free to use an epilogue!

While many editors feel prologues are overused and look down on them, there isn’t the same level of distaste for prologue’s cousin, the epilogue.

What did I choose for my ending? When I was writing my book Crowdsourcing Paris, my memoir about a real-life adventure story I had in France, I chose to use . . .

Why? Because in the ending, I flash back to a moment from a previous part of my story, and this jump was outside of the normal structure of my chapters. I also used a prologue to begin the book, and so it felt right to use an epilogue to end it.

What Is an Epilogue? A Great Way to End Your Novel or Memoir!

So there you have it. There’s your epilogue primer.

In other words, use an epilogue if you want to, but also realize that most epilogues are different in some way than the other chapters in your book, especially in length, narrative style, tone, or point of view. Take that into consideration, and you should be okay.

Writers: Have you used an epilogue in a memoir or novel or a final chapter? Why did you make that choice? Let me know in the comments.

Now, if this were the conclusion of a speech in Ancient Greece, this would be my moment to wax eloquently about the nature of endings, the sadness they bring but also the new possibilities they entail.

But I’m not going to do that. Instead, I believe in putting what you learned to practice. So let’s jump into a writing exercise.

A Greek philosopher is giving a speech, and as he enters the epilogue he is . . . choose one: seduced/attacked/charged with treason.

Write your epilogue for fifteen minutes. When you’re finished, post it in the practice box. And if you post be sure to give feedback to at least three other writers.