There’s an old, worn-out adage about writing: Write what you know. Which is fine if you’re writing about the day-to-day life of Earth, but what if you want to write about a world you don’t know? Today, we’re talking with science fiction author Mike Van Horn about world building and immersing your readers in that world. 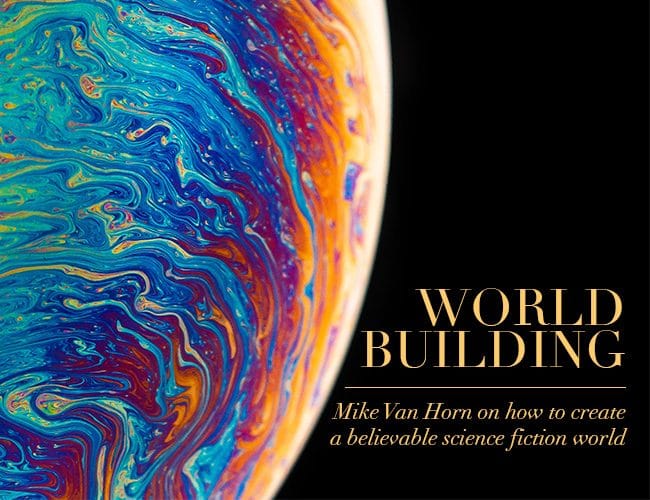 How to Build Science Fiction Worlds

The number one rule about world building is consistency. You can invent any world, any creature, or any rules you want, as long as you keep them straight and stick to them. Make sure every detail you decide on—whether you plan everything beforehand or pants it—is written down for your reference.

Otherwise, you risk confusing your readers, which is the exact opposite of what you want. When world building you want to fully immerse your readers into your world.

Our interviewee this week has been writing science fiction stories for over thirty years. Mike Van Horn is the author of over half a dozen nonfiction books aimed at small business owners. But he always came back to science fiction. His new book, Aliens Crashed in my Back Yard, started out as a short story that metastasized into a trilogy. He’s got another trilogy in the pipeline as well.

You can get in touch with Mike (and his world) on his website.

Congratulations on the release of Aliens Crashed in My Back Yard! Can you tell me a little about the book and the trilogy it opens?

Thank you! I started a short story about a singer, Selena M,  who nursed the surviving alien from a crashed spaceship back to health. They communicate by singing. But the government comes after the vessel, and the aliens. 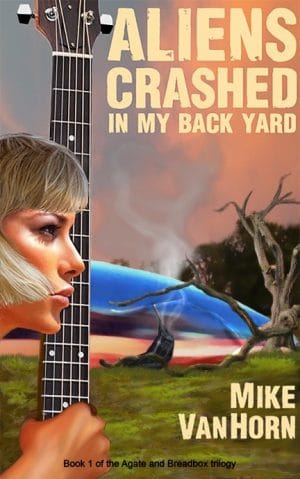 This story metastasized into a trilogy, which will be finished mid-2019.  The next two are:

My Spaceship Calls Out to Me. “If I have an alien spaceship, I might as well travel to the stars!” says Selena. But it must be outfitted for humans. Her ally is a small AI device that controls the ship and talks with her. She names it Wanda and tries to convince it that it’s a sapient being.

Space Girl Yearning. She’s marooned in space, lonely and ready to come home, but the governments of Earth either want to capture the spaceship for themselves or destroy it to keep others from getting it. Then Wanda breaks down…

Since my main character is a singer, I had to write lyrics for songs she performed. If I had lyrics, I needed music. So I got music composed and sung, and now have seven songs produced. Sci-fi with a soundtrack!

In your site bio, you say you have a galaxy in your mind. Are all your books connected in the same universe then?

Yes, they are. All take place within a section of the Milky Way galaxy. Galaxies are vast. I see no need to fly off into other galaxies, let alone across the whole universe.

(I wrote a short story of explorers hopping from galaxy to galaxy, but they are ultimately defeated by the vastness of the universe. After a long while, it’s all the same, like trying to examine every grain of sand of the beach.)

Do you make up your own rules for your aliens, or do you follow a specific canon?

Yes, I make up the rules for my aliens. Rule #1 is “Convergent evolution”: Similar environments tend to evolve similar lifeforms. I assume that life is very common, and that it’s infinitely diverse. However, we are most interested in beings that are similar to us, and those are found on Earth-like worlds. Leave the strange creatures on ice planets for the scientists to study.

There’s a reason why intelligent, technological races that travel into space have a limited range of body shapes and sizes. Head up front, sense organs to detect all ambient energy forms, ability to manipulate tools, language, a culture of cooperation. Curiosity and drive to explore.

When you’re planning your aliens and worlds, do you fully work them out before you start writing?

Not at all. My characters spring out of my imagination—usually at 3 am—as they are needed. I described my original alien on page one: “She was such an odd-shaped entity, like a cross between a squid and a centipede with a head shaped like a parking meter sticking out the top.”

Others that sprang from my late-night imaginings:

At the botanical garden, I photographed strange flowers and cacti that might serve as models for aliens.

The point is, they don’t look like humans in monkey suits, but they share many of our dreams and foibles.

I also avoid the evil rapacious alien invaders, out to enslave humankind. I do want to write a book about an invasion by alien tourists.

You obviously have to do character development for your aliens as well as your human characters. Can you tell me about the process of coming up with character backstory for a being from another planet? Do you first develop their homeworld?

My alien, Breadbox, described her world to Selena as they got to know each other. She described the history and politics of her homeworld, and told what happened there that drove three young people to fly off in a spaceship to taboo worlds. I discovered that her kind goes through four life phases: juvenile, female, male, and elder.

I then had to invent the Galactic Confederation of Oxygen-Breathing Races and describe some of those aliens. I had to coin a term—oki—to describe any intelligent race with language and technology. I decided that there are four main body types of intelligent, space-faring races, and that humans have Type One bodies, the most common type.

All this emerged as I was writing the story, not before. But once I had all this, I’ll stick with it consistently. Even after this trilogy, my later stories will use this same universe.

“
Build your world before you begin writing, or discover it as you draft. Either way, once you’ve established how it works, be consistent.
Tweet this
Tweet

Do you stick with real physics, or do your stories have some made-up science?

My stories depend on being able to do a few (so far) impossible things, such as jump between stars. It’s important to keep my impossibilities plausible so that they don’t just seem like magic.

To do this, I embed them in real science as much as possible. So I research astronomy and astrophysics and cosmology, exoplanets and exobiology. I also explain my science in the Alien Science section of my website.

Some readers have told me they’re not interested in all these details, but others have thanked me and said my explanations of “science” add to the stories. I write for this latter group.

You wrote and recorded music to go with your books. And your site is full of other immersive tidbits for your readers. I’m seeing this more and more with science fiction and fantasy writers, a la J.K. Rowling’s Pottermore. How important is it to provide your readers with a fully immersive experience like that?

The music was unplanned, almost an accident. Because my heroine is a singer, I had to write bits of lyrics that she performs. I was fortunate to find an excellent composer and vocalist. This is not weird sci-fi music, but songs performed by a California pop singer. Her top hit is “Cotton Candy Lovin’.”

But now that I have the songs, my challenge is what to do with them besides link them to the story.

I believe that the more things like this the author provides, the easier it is to draw in the reader. I also have my “Galactic Encyclopedia” to explain the science. And in my blog posts I will interview some of my characters. In addition, I have illustrations of my characters scattered throughout my books.

What’s one thing you’ve struggled with in your writing and how did you overcome it?

Promotion and marketing while continuing to write. And I have NOT overcome this, alas!

The key is to find a few things that I enjoy doing (like this interview!) and keep it up over time. Also to have multiple books for people to choose from and to come back to.

Any other advice you’d like to give aspiring writers out there?

What’s next for you?

On my website I have covers for eight books, plus synopses, but only two and a half written. So I have two lifetimes of writing in the pipeline.

When world building, you’re limited by nothing but the bounds of your own imagination. Immerse yourself fully and your readers will follow. And don’t forget to be consistent!

Thanks to Mike for all his great insight! Aliens Crashed in My Back Yard is available now on Kindle for FREE until June 13. And stay tuned for the remaining books in the trilogy. On galaxytalltales.com, you can ask Mike to let you know when the next books are available.

When you’re world building do you establish all the world rules before you write or do you come up with them as you go? Let me know in the comments!

Today, I want you to think of an “alien” species. Think about what they look like, what they eat, if they wear clothes, how they communicate, where they live, how their society works, and any other details you can imagine.

Now spend fifteen minutes writing a profile of that alien. Be as specific as you can.

When you’re done, share your work in the comments. And don’t forget to comment on the other profiles posted!