Yesterday I took a day trip to NYC because my Mom got tickets to see the ridiculously good Broadway show Hamilton. 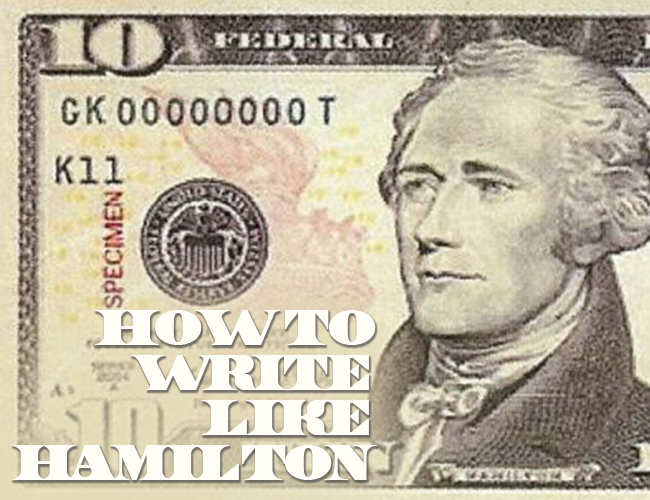 It’s a hip-hop themed musical written by Lin-Manuel Miranda (who just won a genius grant by the way) that tells the story of our founding fathers.  It was incredibly inspiring to see how Miranda took what he knew (rapping, music, diversity) and used that to tell Alexander Hamilton’s story in an innovative way.

A reoccurring theme of the show was Alexander Hamilton’s abilities as a writer.  Even though he was an “orphaned immigrant,” he rose to become George Washington’s right-hand man because he was a brilliant writer.

The play was especially well-timed since Alexander Hamilton is about to lose his position on the US $10 dollar bill, to be replaced by a woman.

Alexander Hamilton Was a Great Writer

He was a threat because he could write.

He had influence because he could write.

I loved that. That’s why I must share with you what I learned about writing from Hamilton (i.e., Hamilton the person from watching the Hamilton musical).

Alexander Hamilton wrote “like he was running out of time” (an oft-repeated lyric from the musical).

Of the eighty-five installments of the Federalist Papers (arguing for ratification of the Constitution), Hamilton wrote fifty-one.  As George Washington’s chief staff aide, he wrote letters to Congress, governors and generals.  He drafted orders.  And, if the musical is accurate, he even wrote Washington’s speech explaining why he wouldn’t run for a third term as president.

Hamilton had strong beliefs and he wasn’t afraid to express them—even if they yielded him powerful enemies.

In addition to promoting the Constitution, he advocated for the establishment of a national bank and other policies of a strong central government.  He was even anti-slavery.

His strong principles often led to fierce debates with Thomas Jefferson (or, more specifically, rap battles if we’re going with the musical).

Hamilton’s commitment to his beliefs was in stark contrast to Aaron Burr, who was his foil in the show. What was Burr’s advice to Hamilton? “Talk less, smile more” and don’t “let them know what you’re against or what you’re for.”

Hamilton’s response was to endorse Thomas Jefferson, who disagreed with him on almost everything, for the presidency in 1800 over Burr—because at least Jefferson, unlike Burr, had principles and beliefs.

3. Think About Your Legacy

As a writer, Hamilton had the unique opportunity to tell his own story.  He recorded his thoughts and ideas in letters, essays and journal entries, which enabled him to have a say in his legacy.  This was particularly true of his era, when primary sources were more difficult to get a hold of.

The musical shows that Hamilton was extremely conscious of his legacy and the power his own words could play in shaping it.  For example, when suspicious payments from Hamilton to a man named James Reynolds emerged, rumors began to swirl that he was embezzling money from the government.  In reality, he was being blackmailed for sleeping with Reynolds’ wife.

In order to preserve his (professional) reputation, Hamilton wrote a pamphlet discussing the details of the affair and subsequent payments in detail.  Unfaithful to his wife? Yes. Unfaithful to his country? No.

Take fifteen minutes to write something you hope will be a part of your legacy.  Share in the comments section!