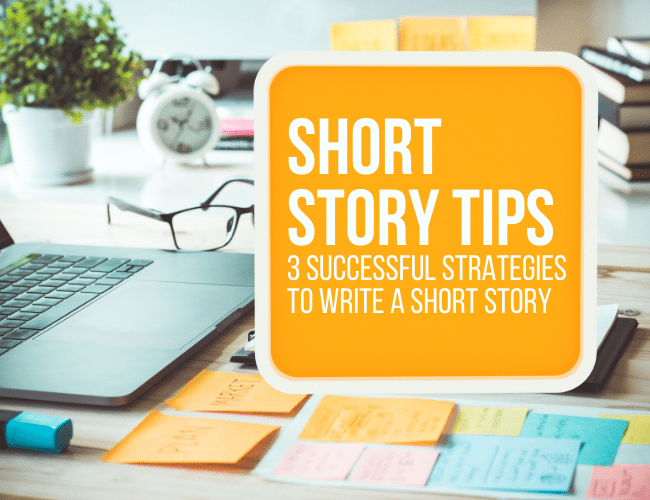 A novel has hundreds of pages to get you involved in the characters’ lives and to transform you to another world, all to leave you with a great ending that you’re thinking about weeks—maybe even years—later.

In a short story, you have to do all that in a few pages. It’s no wonder most of the “new” writers I know would rather write novels. Short stories may be small, but they are mighty. (Not to mention they are a great way to keep up a writing habit.)

I’ve talked about coming up with ideas, plotting, and some key elements of short stories. Now it’s time to stop dilly-dallying and get to writing. This article covers three successful short story tips and strategies to write a short story.

I’m going to be honest: I do not use the same writing process for every story I write. And I really don’t think my fellow short story writers do either.

In the introduction to American Gods, Neil Gaiman quotes Gene Wolfe, who told him,

“You never learn how to write a novel. You only learn to write the novel you’re on.”

That said, there are three basic strategies to get those words on the paper. Over time, you’ll develop your favorites, mash up different strategies, and probably invent your own. Everyone’s creative writing process is different.

Whether you’re new to writing short stories, or are a veteran and just want to mix it up, here are three ways to get you started writing a short story:

“
Not every short story writer's process will be the same. Here are three writing strategies to help you write a short story.
Tweet this
Tweet

For Pantsers: Write the Story in One Sitting

Writers who consider themselves “pantsters” vs. plotters don't know much about the direction of their story before they start writing. They like to write by the “seat of their pants” and follow their characters where they go.

When I write this way, it’s because of a random idea that pops into my head, not because of writing prompts or anything like that. These stories are never written during my blocked-out writing time. They’re highly inconvenient little beasts, but oh, so satisfying. This is why pantsers pants—for this feeling.

If you write this way, be prepared for heavy edits. But don’t worry too much if this is your preferred way to write.

Story structure comes more naturally the more you practice it and the editing won’t be as daunting after you’ve got a couple of dozen stories under your belt.

For Plotters: A Mixture of Snowflake and Structure

Plotters know everything that happens in their story before they start the writing process. They have an extensive outline.

The basic idea is to write a few sentences telling the whole story. (Six sentences to be exact, though you could start with eighteen if you wanted to have two sentences for each step.) These six sentences are essentially the story outline. Then you expand those sentences into paragraphs, and then those paragraphs into pages.

There’s a formula for this that will help you identify a series of events that drives the plot:

Want to see this in action?

I’m sure you figured out this is Dickens’s A Christmas Carol, which is a little long (around 30,000 words, I think) to be considered a short story, but it works anyway.

Why? Because these six sentences are the six elements of plot and the basic elements of story structure. You could do this for every type of writing, every book, and every short story (and I encourage you to try it).

The basics are here. The next step is to expand on these sentences and make them into six paragraphs and then six pages.

With each iteration, more information, backstory, description, and dialogue are added until it is a complete story.

Note: If you are looking to be a flash fiction writer, this method, in my experience works best. Since flash is so short, you don't have much room at all to add anything. Getting that six-sentence outline and expanding it into about six paragraphs will get you a tight piece of flash fiction with all the elements of story in there.

For Plansters: The What If Question

Plantsers are people who do a little outlining, but mainly like to write by the seat of their pants.

I talked extensively about the value of using the “What if?” question when writing in a previous article.

The What If question is my all-time favorite way of producing short stories. It’s got the spontaneity of pantsing, but gives a bit of structure to the writing process so editing isn’t such a mess.

In the case of old Scrooge, it would go something like this:

There’s an inciting incident here, progressive complications, the dilemma, and the climax. This method gives you a basic outline, just to get you started in the right direction.

Writing Tips to Keep in Mind as You Write

But if you're already familiar with story structure, write away with these principles in mind:

As you develop your creative writing skills, you'll write more compelling stories (and maybe even get some published!). But you can't develop your skills in a vacuum; you need fellow writers to help you along by giving you feedback and support.

Successful authors rely on writing communities, and you should too.

These are just three of the countless ways you can write a short story. Not only is each writer different, but each story is different.

I can guarantee that as you move through your writing career, you'll hone your own process. And probably come across times where your own process just doesn't work and you have to develop some other way of doing the same thing.

Short stories are a great way to experiment with the writing process, as well as experiment with structure, voice, style, tone, pretty much anything that goes into writing.

If you have no idea what your writing process is as of yet, I encourage you to try one (or all three!) of the above methods. Let's get writing!

What short story tips help you write short stories? Let us know in the comments.

Today, you're going to start writing a short story. Whether you're a pantser, a plotter, or somewhere in between, take fifteen minutes to develop your six-sentence outline. (Just try it, pantsers. Worst case scenario, you have a piece of flash fiction at the end.)

If you have time left over, work on expanding those six sentences into six paragraphs.

When you're done, share your work in the practice box below. Then, leave feedback for three of your fellow writers on their short stories!