How Spotify Can Make You a Better Writer 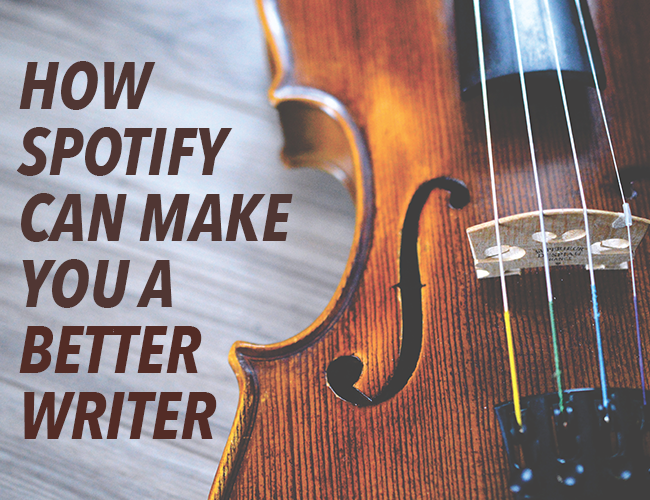 But as a learning writer, I had always assumed that music would be a distraction, that it would deaden my ability to hear my character’s voice, or make it harder to find the right words to explain a setting.

I couldn’t have been more wrong: listening music can actually make you a better writer. I have Spotify to thank for that discovery.

According to Susan Perry,

Music often comes up when writers talk about flow, as though somehow this particular sense has become associated with fluid writing.

Flow describes the heightened state of performance that athletes call “being in the zone.” It’s a term that Perry borrows from psychologist Mihaly Csikzentmihalyi, who has devoted his career to understanding how the best professionals in every field become the best at what they do.

Perry, in turn, took Csikzentmihalyi’s ideas about flow and turned the focus on writers. Her book Writing in Flow: Keys to Enhanced Creativity is an analysis of hundreds of interviews with award-winning writers and her discoveries about how these writers “find their flow.”

For those that use music, Perry theorizes,

This may be because the senses generally tend to operate from a different part or combination of parts of the brain from the logical, linguistic part.

In this way, music becomes part of a letting go process, an aid to helping the creative mind break free of the rational one. And this is exactly how it worked for me.

In addition to being a writer, I’m actually a semi-professional musician. I grew up singing in church choirs, took piano lessons for 10 years, picked up the guitar in college, and on good nights get paid to make music. Given this, it might seem obvious that music would be a useful, creative trigger for me, helping me to be a better writer.

But until recently, I wasn’t using it. Music has always had a powerful effect on my mood, but I always found lyrics to be distracting when I was writing.

That changed when I signed up for Spotify (it’s free!) and discovered film scores.

The first thing you need to understand is that a film score is different than a soundtrack. A soundtrack is simply a compilation of the songs (typically pop songs) that were used in a movie.

A music score, on the other hand, is very different. Whether it is an orchestral arrangement in the style of John Williams (Star Wars) or a contemporary soundscape of Hans Zimmer (Batman Begins), these scores are “orchestral” arrangements composed specifically for the purposes of supplementing the emotional narrative of a movie.

The cool thing is, you don’t need the movie to still feel the emotion.

Music Can Make You a Better Writer

This is how music helped me. In my last post, How Writing Habits Make Writing Easier, I talked about the way writing habits and rituals can make you a better writer by helping you “loosen up.” I started using music as a prewriting ritual to help me “get in the zone.”

What I discovered was that not only could I use music to help me get me in the right mood for my daily writing, but that the right music actually seemed to bolster and propel me through my daily writing. I stayed away from music with lyrics and found that film scores really worked for me.

Over time, my Spotify artist list has become a creative tour de force of emotionally charged music that helps me quickly and easily find my flow.

Spotify Can Help You Find Your Flow

Here’s how you can incorporate this into your writing practice and use music to become a better writer:

When you or your project needs emotional inspiration, view your artist list, select a composer, and let the music help you find your flow.

For those of you who are working on a thriller (like me), Hans Zimmer (Batman Begins) and Brian Tyler (Avengers: Age of Ultron) never cease to inspire. For the rest of you, I’d love to hear what composers work for you or your genres.

Until next time, happy listening (and writing)!

Do you listen to music while you write? How has music helped you? Let me know in the comments!

Find a music score that resonates with your current writing project. If you can’t find a score or don’t want to use Spotify, use any piece of music that you can write to.

Now, listen to the music and freewrite for fifteen minutes just following the emotions, or tone, or plot the music inspires. Does the music make you think of a setting? Describe it. Does it inspire a plot? Write it. A mood? Capture it. Whatever the music inspires, write it down.

Share your writing in the comments, and remember to leave feedback for your fellow writers.