6 Characters Your Protagonist Needs to Have Around

Your protagonist may be the star of the show, but they can’t do everything alone. Just like it takes a village to raise a child, it takes an entire cast of characters to help your hero along on their journey. 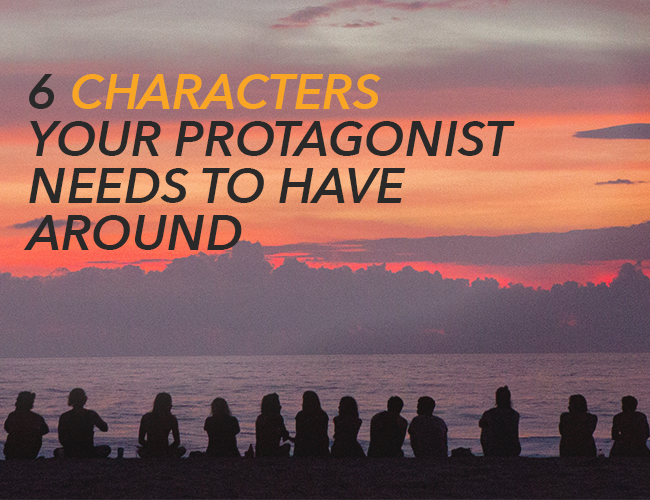 Do you think Harry Potter could’ve accomplished all that he did if it were just him on his own out there against Voldemort? Of course not. He had friends who stuck by him, teachers who came and went, and a whole assortment of villains that drove the plot forward. Your main character needs those people, too.

“
Your main character can't go it alone. Don't forget to give them a supporting cast.
Tweet this
Tweet

Let's take a look at the people who surrounded Harry and the roles they played in his life. Which of these character types appear in your story?

This would be the Dumbledore of the story. Usually an elder, but not necessarily, they’re the one who always has some sort of nugget of wisdom right when the protagonist needs it. They teach and steer the main character away from stupid decisions (though they may not always succeed at that).

If your hero ran off without anyone to guide them, they’d probably end up in heaps of trouble.

Being the hero of a story puts a lot of pressure on a person. They can’t handle all of these secrets and worries alone! Whenever they need some advice or a listening ear, this is the person they go to.

This could be a friend, relative, teacher, anyone willing to offer help and encouragement. Sirius Black could be a good example of this.

Whether it’s your typical “big bad,” a school bully, or that cashier at the grocery store who gives the protagonist dirty looks, this is the character who offers up some conflict. It’s someone they can butt heads with, rant about to the confidant, maybe use a picture of their face as a dartboard.

This character doesn’t even have to be evil. As long as they and the main character are far from bosom buddies, you’re in the clear. Think of them as Snape.

As a lot of heroes (such as Harry) are tragically orphans, the parental figure doesn’t have to be a mom or dad. They don’t even have to be related by blood. Mr. and Mrs. Weasley were some of the best versions of parents Harry could’ve asked for.

This is the person who never forgets a birthday, makes a pot of the best chicken noodle soup when your protagonist has the flu, and hugs them goodnight.

Is your protagonist planning to break into a high-security building in the dead of night in order to get those top-secret blueprints for the villain’s underground lair? This character doesn’t even need to be asked to come along; they’ll be there dressed in dark clothing and with a Plan B, C, and Q in mind.

As sidekicks have to be tight with the hero, they generally end up being the best friends, too. Ron and Hermione were Harry’s partners-in-crime, without a doubt.

Every story gets a little—or a lot—dark sometimes. But if the reader got stuck under that gloomy storm cloud for the entire ride, chances are they’d get tired of it.

That’s the cue for this character to pop in and crack a joke or two, cheering up both the reader and your protagonist. Fred and George were definitely the comic relief of the series.

Of course there are many more types of characters your protagonist in particular might need around. For example, if you’re writing a romance, they’d need a love interest, and maybe even a “wrong love.” It’s up to you ultimately to decide which of these they need, when, and where.

If you wanted, you could combine certain characters to make someone brand new and unique. What would a parental figure who’s also a partner-in-crime look like? How about an antagonist/comic relief?

The choice, and the story, is yours. Just don’t leave your protagonist stranded, all right?

What characters help your protagonist? Did I leave any out of this list? Let me know in the comments!

Write a scene where your protagonist is in a situation that requires them to get help in some way from one of the characters listed above. Write for fifteen minutes, then post the results in the comments. Don’t forget to give your fellow writers a little love, too. Have fun!