Character Voice: How to Actually Listen to Your Protagonist

Today’s guest post is by Sarah Bradley. Sarah is a freelance writer, creative writing instructor, and the founder of Pen to Paper Creative Writing Services. You can find her offering instruction for beginning writers on the Pen to Paper blog, posting motivational tips and resources on Facebook, and sharing the inspiration behind her own creative process on Instagram (@pentopaperwriting).

Anyone who has dipped their toes into the world of writing novels knows how crucial character development is to telling strong stories. Plot, setting, and dialogue are necessary building blocks of fiction, but your characters are the foundation that your story is resting on—without dynamic characters, no amount of plot twists, fantastical settings, or authentic dialogue will magically transform into a novel that people want to read. 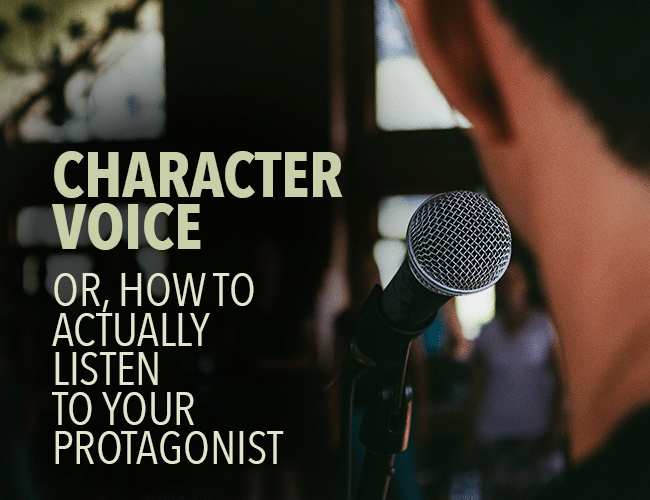 If the success of your novel is in fact riding on the strength of your characters, you need to know who they are, inside and out. More importantly, you need a character with a strong voice, one that can reveal the emotional depths of your story to the reader. That character voice will support your novel—and without it, your story will crumble.

That’s a lot of pressure, for both you and your character. How do you develop a compelling protagonist who can carry your entire story on his or her imaginary back?

The Dizzying World of Character Sketching

When I first started putting my ideas for a novel onto paper, the plot points and setting fell into place somewhat easily. What was more elusive was a sense of familiarity with my protagonist, a young girl who was still grieving a deeply traumatic loss from her childhood. Aside from still being fuzzy on the details of her physical appearance and personality, I felt like I didn’t really know her.

As a creative writing instructor, I knew what my options were. I counsel students all the time on the various writing prompts and exercises that exist to help writers learn more about their characters.

Fill out a character sketch outline! Take your character out to lunch! Put her in an unfamiliar location or time period! Force him to do something normal, like change a tire or go grocery shopping!

The intent behind many of these tactics is meaningful: you can’t really bring a character to life on the page if you have no clear vision of him or her in your head.

“
You can’t bring a character to life on the page if you don’t have a clear vision of them in your head.
Tweet this
Tweet

But I worried that spending time working out this character’s full rap sheet of qualities wasn’t going to get me any closer to the one thing that was going to help me write this novel: developing her voice.

I was planning on writing a first-person narrative. As a young girl, this character’s perspective on the events of the novel was just as valuable as the events themselves. I didn’t want to assign her a bevy of random character traits. I wanted to hear her.

Let Them Tell You Who They Are

I decided to take a different approach. I tried to imagine myself putting on this character’s persona, the way one might slip into a stranger’s coat or pair of shoes. Then I blocked out all of my preconceived notions about what she looked like, how she behaved, and what she might want.

I forced myself to be quiet and listen to her. Who was she, in her own words? What did she have to say about herself? How did she view the events that had shaped her childhood? Was she funny or serious? Was she self-aware, or innocently naive?

What did she want? Why? How did she plan to get it?

An hour later, I was stunned by what had come out of this simple exercise. This character told me things about herself that I would have never imposed upon her in a traditional character sketching exercise. She was determined. She was strong. But she was also scared, and her fears were constantly threatening to cripple her.

For the first time since the idea for this novel came into existence, I finally knew who this girl really was, because she had told me herself.

Be Quiet and Listen: The Character Monologue Method

Without realizing it, what I had done was write a character monologue. In an effort to simply hear my character speak in her own voice, I had harkened back to the days of Shakespeare and written her a monologue summarizing who she is at the imagined start of my novel.

It was the single best thing I’ve done to kickstart my writing process. Prior to completing the monologue, I was stalling. I had a loose plan for the novel, but where and how did I really get started?

After the monologue, those fears (nearly!) went away. I was reinvigorated—this character was someone I cared deeply about. Her story was worth telling. It was the exact exercise I needed to find my motivation for writing.

Was this a character who could carry my story on her back? Absolutely.

Whatever your scenario is, writing a character monologue could be the answer. It worked well for me as an initiation exercise, but you can create one at any point during your writing process.

When you give your characters the freedom to speak, you might be surprised at what they reveal about themselves. If given the chance, what would your protagonist decide to tell you?

Have you ever written a character monologue? Let us know how you listen to your character’s voice in the comments.

Consider the protagonist of your current work in progress. Spend a few minutes tuning out distractions and setting aside your preconceived ideas about who this character is. Think about where they are at either the start of your novel or the brink of one of your story’s major turning points.

Then spend fifteen minutes adopting this character’s persona in writing. Using a first person point of view, write as if this character’s voice is funneling through you. You’re simply a siphon for his thoughts. Is he happy with where he is? Why or why not? How did he get there? What mistakes has he made, what regrets does he have? What does he wish could be different? What does he plan on doing next?

When you’re finished, post your character’s monologue in the comments section. Don’t forget to engage with a few other writers’ monologues as well!