Can Constrained Writing Make You a Better Writer?

Before we talk about the concept of constrained writing and tell you how it works, let me ask you this: Have you ever opened a new blank document to write, stared at it for far too long, and then realized you have no ideas, that your mind is as blank as the page you’re trying to write on? What if you could double or triple the number of ideas you have, not by doing something extra, but by taking something away? 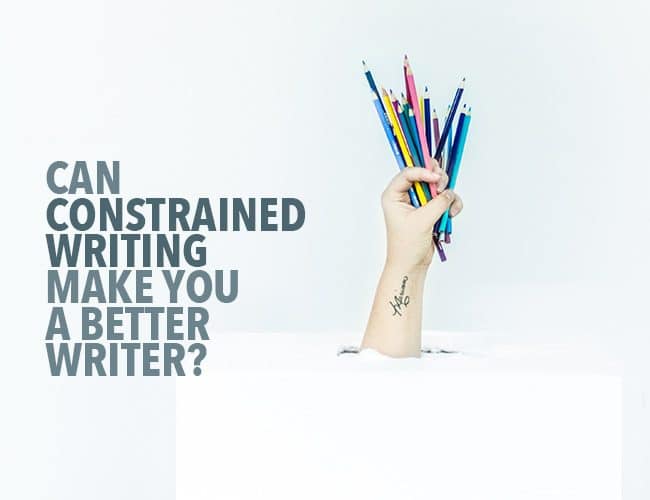 That’s what constrained writing is about: taking away options so that you can actually be more creative.

What IS Constrained Writing?

“Constrained writing” is a literary technique where you create rules and limits for your writing. For example, haiku is a popular form of constrained writing. It’s a form of poetry that originated in Japan, and it’s structured with three lines of five, seven, and five syllables respectively.

Constrained writing is most common in poetry, but novelists have used the form as well. For example, there are several “lipogram” novels, novels written without a specific letter. Often the eliminated letter is “e,” the most common letter in the English language. The first example of this is a lipogram novel Gadsby by Ernest Vincent Wright, published in 1939 with the subtitle “50,000 Word Novel Without the Letter E.”

But lipogram is just one way to constrain your writing, and as challenging as it is, it’s not the most common. Other forms of constrained writing include the following:

To Generate More Ideas, Set Your Own Constraints

Some writers have this belief that sounds something like this: “It’s my writing. I can do whatever I want. Forms are dead. I can invent new forms to tell the story I want to tell and achieve aesthetic perfection.”

I honestly used to have a belief like this. Perhaps it came from rebelling against all those crazy Renaissance poetry forms I learned in college (thanks, Dr. Willis!).

But what happens when you rebel against the constraints is that you can easily find yourself stuck, staring at a blank page.

“
If you can write anything, it’s very easy to write nothing. Constraints make you creative.
Tweet this
Tweet

Instead of rebelling against the constraints, set your own! This is especially helpful if you’re stuck, if you can’t think of what to write next. Perec, a French writer who wrote a novel called A Void, in which he avoided (pun intended?) the letter “e,” said the complex set of rules and constraints he used to write his most famous novel, Life: A User Manual, was an idea-generating machine.

When you set constraints for your writing, you might find you come up with not fewer ideas but double or triple the number.

Constrained writing can help you generate more ideas, but how should you constrain your writing? Here are five ideas:

We’re easing into constraints with something many novelists do, not necessarily in an effort to constrain their writing but as a goal to work up to. The novel is a form, though, and while it is a form that is very loosely defined, a novel is usually over 65,000 words and under 120,000 words.

To use this constraint, first check out our word count guide to find common word counts for different genres. Then, set your goal and start writing your way up to it. The hard part for this constraint will come in the editing process, when you have to cut your story to make it fit into your word count!

Shawn Coyne, the creator of the Story Grid framework, defines genre as a set of reader expectations. As a writer, you could do worse than to set your constraint based on the readers who will one day read, and hopefully enjoy, your book.

How can you get your story to take place in the fewest number of locations possible?

This constraint is especially useful for short fiction, where you are already constrained by length and don’t have the space to develop many different settings. It’s also critically important for screenwriters (or novelists who would one day like to see their book turned into a film), since every new location increases the budget of the film.

When it comes to short stories—and especially writing contests—constraining your setting isn’t just a fun challenge. It’s practical. After analyzing prize-winning stories, I’ve found almost all of them take place in just one to two scenes. That means not only are just one or two locations all you need to tell a great story, but you should only have one or two locations.

Want to try your hand at constrained writing, get feedback along the way, and get published (guaranteed!)? Enter our next writing contest!

How can you tell your story with the fewest number of characters?

As an editor, I’ve often given the advice to cut characters or even merge them with other characters. Why? Because it’s hard for the reader to learn a lot of new characters, develop an attachment to them, and then start to root for (or hate) them. This is one reason why we love novel and TV and even film series so much. It allows us to follow characters for longer periods rather than just one book, film, or episode.

If you’ve ever seen a one- or two-actor play you know how powerful a story following just a few characters can be. Pair this with a setting constraint and you’ll have even more fun!

How short a period of time can you focus your story on? Can your story take place in a specific year or month? Or even just one day?

This is what made the series 24 so interesting, because all the action of the story took place in just twenty-four very intense hours, broken up into twenty-four episodes.

A narrative device is a particularly effective way to constrain your writing.

Perhaps your story is told all in letters written to someone “off-screen.” This is how Frankenstein, The Perks of Being a Wallflower, or even The Martian are written (this is called the epistolary device).

Or perhaps your story is only dialogue, maybe even a story being told to someone else. This is how Joseph Conrad’s Heart of Darkness and most of William Faulkner’s Absalom, Absalom! are written.

Perhaps you have a character who is telling the story to the reader, maybe even writing the story down to you, the reader, like Salman Rushdie’s Midnight Children or Herman Melville’s Moby Dick.

Or the writer is “translating” another book into the readers’ language, even though that story doesn’t actually exist, like The Princess Bride by William Goldman or How to Train Your Dragon by Cressida Cowell.

Narrative devices are a great way to use constraints to make your story more interesting.

Everyone is constrained by something. You might be constrained by the limits of your form, by the marketplace, by your skill level, or even your own imagination.

However, by taking the initiative to set your own constraints, you actually give your imagination more to work with, and you’ll find you come up with more ideas, not fewer.

So stop trying to avoid constraints. Instead, set them yourself and let the ideas flow.

How have you constrained your writing, consciously or subconsciously? Let us know in the comments!

Write a story using a constrained timeline, in this case: one minute. Can you make the entire story take place in just sixty seconds?

Practice using this constraint for fifteen minutes. When your time is up, post your practice in the comments section. And if you post, be sure to critique three of your fellow writers.