Crossing the Threshold: How to Write This Important Hero’s Journey Scene

In order for your hero to embark on an epic journey, they must first cross a threshold and leave their ordinary world. In fact, Crossing the Threshold is the fifth important stage in every Hero’s Journey. But how do you write a scene like this? 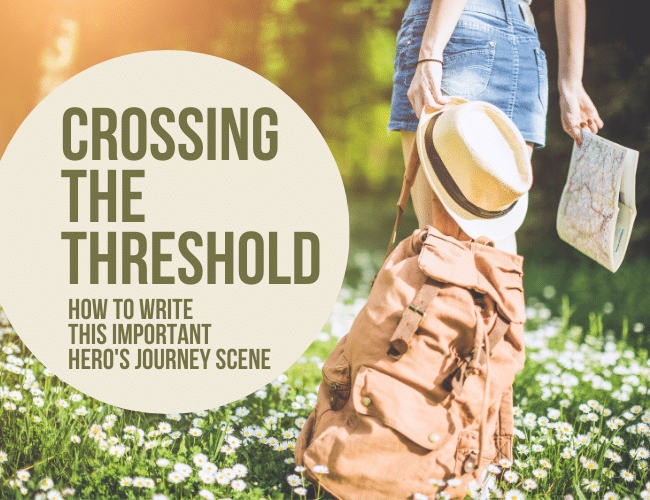 By the time your protagonist reaches this point in your story, they have been called to adventure. They’ve trained with the Mentor and gathered their companions to their side.

If a Hero’s Journey story is going to keep a reader hooked, it needs to transition to its Second Act with thrills and new mysteries. Here’s how to absolutely nail this crucial step for this application of story structure.

The Hero’s Journey: A Refresher

The core principle of the hero’s journey is that your hero leaves her normal life, overcomes difficult hurdles, and conquers evil in a way that brings blessings to their home community. All hero journeys, whether ancient myths or modern stories, follow this process, and many films that use this structure have won Academy Awards.

So why study Campbell and Vogler, and emulate their process? Because audiences love it, and innately crave the story beats of the hero’s journey.

Now that we’ve covered the basics, let’s get into the key moment with your hero will face their biggest conflict yet: Crossing the Threshold. The moment when the Hero leaves their ordinary world and enters a new one.

As we begin learning about our hero’s first step into the adventure, let’s define Step 5 of the Hero’s Journey:

Crossing the Threshold occurs when the hero leaves their ordinary, mundane life and enters a new, dangerous, and special world. This crossing may occur willingly or unwillingly, and before or after the Meeting the Mentor step. The threshold is almost always a physical boundary of some kind, and it is guarded by natural perils or dangerous enemies, known as the threshold guardian.

This step is essential because it not only symbolizes a key life crisis we all go through—leaving home for a new, unfamiliar future—but it starts the journey. Only when the hero crosses a threshold do they leave the ordinary world, the world they knew before, and enter a new one (where they will face their fear of death, in some sense).

The hero must pass the threshold into adventure, and it must happen in a thrilling, high-stakes scene.

How to Create and Write the Threshold

First of all, what is a “threshold”?

Think of your story’s threshold as the boundary between your hero’s familiar, comfortable home and the new, dangerous frontier. It is almost always depicted physically as some kind of boundary, like a fence, chasm, river, or wall. The physical boundary must be crosse —and often, the way back across is cut off or destroyed, further isolating the hero from all they know, stranding them in the new world.

I think of Samwise Gamgee in The Lord of the Rings pausing to say, “If I take one more step, that’s the farthest I’ll have ever gone from home.” I think of The Matrix, when Neo takes the red pill only to have his whole world as he knows it melt into digital nothingness. And I think of Marty McFly accelerating to 88 miles per hour in Back to the Future and finding himself not in the parking lot of a mall, but in a bland field, leaving Doc Brown behind.

And, of course, one thinks of poor Dorothy, gazing about a world of color as she steps into the magical land of Oz.

The Hero’s Journey gets going when the hero ventures across a notable physical or temporal boundary. Without this crucial “first step,” it’ll be hard for your reader to know whether we’re actually on our way or not.

But making the threshold impressive isn’t enough. It must be blocked by an imposing foe connected to the central conflict of the story.

Another key element of this step in the journey is that of antagonism. In Joseph Campbell’s research, he found a whole category of characters known as “Threshold Guardians,” characters who appear when the hero starts her quest.

“
To embark on their Hero’s Journey, your protagonist must cross the threshold—no easy feat, as it’s well guarded.
Tweet this
Tweet

In one of the best-known modern stories using the hero’s journey, Star Wars, Luke Skywalker chooses to leave his home planet once his mentor, Obi-Wan Kenobi, promises to teach him about the Force. However, when they board the Millennium Falcon and try to leave, agents of Darth Vader do their best to stop our heroes by chasing them and shooting at them with blasters. The hot pursuit continues into orbit, where Star Destroyers loom, making the escape even more perilous.

Another beloved story infused with this mythological storytelling structure is Harry Potter. For the sake of simplicity, we’ll focus on the first book, The Philosopher’s Stone (or Sorcerer’s Stone in the United States).

Eventually the plot does get dangerous, when Harry must stop Professor Quirrell from resurrecting Lord Voldemort. And while this isn’t the Crossing the Threshold scene, it is worth looking at the number of obstacles Harry, Ron, and Hermione must face when trying to retrieve the stone. Each of these challenges works as an example of a Threshold Guardian, from Fluffy to the charmed chess pieces.

And that’s what makes a heroic journey exciting: the way new environments force us to confront our deepest fears.

How to Plan Your Threshold

It’s important to plan your story with an open hand. Scenes like this will require multiple drafts—probably more attempts at them than you’d like!

But it’s essential to get the choices and stakes right. Here’s what I mean:

In other words, use “Crossing the Threshold” as the perfect opportunity to complicate things. Use it to test your protagonist even more. Use it to bring her to her knees, either physically or emotionally, making her want to give up and turn back.

But don’t let them. A good way to do that is to destroy or block the road back. Sure, it’s a bit of a cliché to have your protagonist say, “There is no turning back.” But if you find new and innovative ways to block the road home, you can add this necessary layer of tension to your story.

In fact, here’s a very open-ended way to pull this off, and it will make your conflict even more irresistible:

The hero’s goal is too damned desirable to turn back from.

If you build a deeply empathetic and fully motivated goal for your protagonist, this agonizing decision will make perfect sense.

“Who wouldn’t want to turn back?” your reader will think. “But she has to keep going!”

Your reader will cheer for that hero forever and ever. They can make mistakes. They can act rashly or foolishly or ambitiously.

As long as she is pursuing a goal that the reader is completely on board with and would possibly drop everything for, too, then you can throw the entire contents of hell at that protagonist along the entire journey.

Cross Over to the Other Side

If the Hero’s Journey is about going on a great quest to solve a societal ill, then the Threshold represents the first big step. It’s the taste test for all the trials that are to come if this goal is to be achieved.

Remember: It must be physically represented in some way, it must be guarded, and it must humble your protagonist all over.

Just like your hero, you’re going to struggle with this scene. It will probably be an action scene, or at least an emotional scene with plenty of physical movement, and such scenes sound easy in our minds, but tend to be painfully arduous when we sit down to create them.

And just like your hero, you can’t lose hope. Keep on giving it your absolute best.

One great way to handle difficult scenes like this one, by the way, is to be a part of a thriving writing community that values feedback. The best community I know of is The Write Practice Pro, a growing group of selfless professional authors right here at The Write Practice. We know what it’s like to struggle through scenes like this, and we’d be honored to help you with yours.

Come see what we’re all about right here.

Can you think of more Crossing the Threshold scenes from stories you love? Let us know in the comments.

Take fifteen minutes to practice writing a scene where a hero crosses a threshold.

To do this, first think about your character’s goal. What is it they could want? What could they be trying to accomplish?

Then, consider what they need to do to get there. What is the first step your hero needs to take in order to begin his/her journey toward the goal? What physical boundary might he/she have to cross? Who or what guards it?

Freewrite a rough sketch of the beats and dialogue and action. Don’t worry about where the story is going or even where it’s been. Just have fun dreaming up a scene where the hero has to take the big leap toward their goal through an obstacle.

Post your writing in the Practice below, then read three other writers’ Practices and leave a piece of helpful feedback!