Dialogue Tags: What Are They and How To Use Them

Writers encounter dialogue every day, but too often recently I've seen great stories ruined by choppy, incoherent, and straight-up weird dialogue. How can you use dialogue tags effectively in your stories to produce clear dialogue that zings? 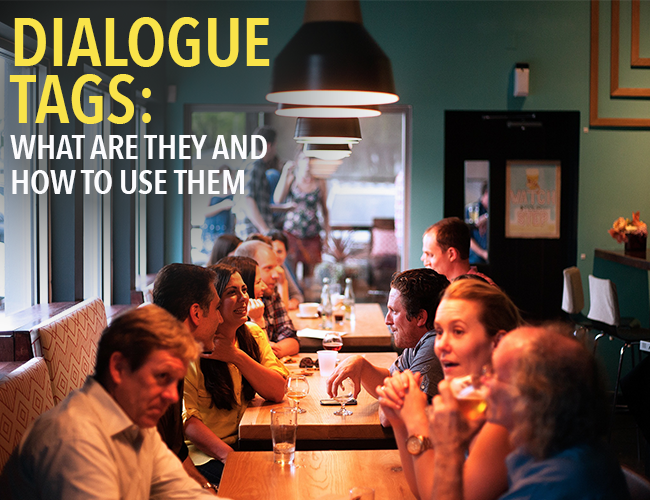 Recently we talked about why dialogue is important, along with the seven critical roles it plays in stories. If you've played with dialogue for long, you quickly come up against some of the questions of how to properly format it on the page, what tags to use, and how to keep it from feeling redundant. Let's take a closer look at dialogue tags and how to use them.

What is a Dialogue Tag?

A dialogue tag, also known as an attribution, is a small phrase either before, after, or in the middle of actual dialogue that indicates the speaker. For example:

“Did you get my letter?” asked Katie.

The phrase “asked Katie” is the dialogue tag in the sentence.

How To Use Dialogue Tags

Tag Before the Dialogue

When dialogue tags are before the dialogue it looks like this:

Meghan asked, “Are you coming to my party?”

Tag After the Dialogue

When dialogue tags are used after the dialogue it looks like this:

“Are you coming to my party?” Meghan asked.

“Are you coming to my party?” asked Meghan.

Tag in the Middle of the Dialogue

When dialogue tags are used in the middle of dialogue it looks like this:

“The car lights,” she explained, “aren't bright enough to drive at night.”

How Often Should You Use Dialogue Tags?

I came across this question recently in a writing group. How often do you need to tell the reader who is speaking? There are a few different rules to decide how often you use dialogue tags.

The most important thing to remember is:

If you are writing short dialogue, where each line is only a few words, you can use fewer dialogue tags. For example, this exchange has too many tags if there are only two people in the conversation:

In this case the dialogue tags are almost as long as the dialogue itself, and they become unnecessary and distracting. If the characters are previously introduced, the tags aren't needed. For example:

The second example, which removes the the second set of dialogue tags, reads faster and is simpler. Simple is always better.

If you are writing with multiple (three or more) characters, use only enough dialogue tags to clearly indicate who is speaking.

If you are trying to insert action or description, you can use it as the dialogue tag. For example:

Jen looked down. “It's good to see you.”
“Yeah, you too,” Ben said, biting the inside of his lip.

There's a debate on how often to deviate from using a simple “said” to mark dialogue tags. One side argues that the only dialogue tags necessary are said and asked. (Joe is a believer in said.)

The other side, mainly composed of middle and high school English teachers around the world argue, “Said is Dead!”

The “Said Haters” argue that people do not simply say words; rather, they whisper, yell, remark, argue, and so forth. They believe that using more descriptive words paints a clearer picture for the reader.

The “Pro-Said” Party believes that all the extra verbs are distracting to the reader. They believe that “said” is easily ignored, so your readers can keep their focus on the dialogue.

The best thing to do as a writer is to look at the industry standard for your genre or writing field. Make sure you notice how published writers are creating their dialogue tags, and use those as a model for your own practice. Can you deviate from those standards for a specific purpose? Of course, but know why you are doing it, and don't be surprised If it meets some resistance.

Which side are you on? Do you believe writers should only use “said” as a dialogue tag or should they vary their dialogue tag word choice? Let us know in the comments.

For fifteen minutes, practice writing dialogue and follow the rules above. Experiment with said, and with placing dialogue tags in different spots. Be creative!

Once you finish, post your practice in the practice box below and leave feedback for other writers.