Why Is Dialogue Important? 7 Roles Dialogue Plays in a Story 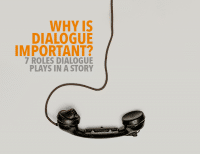 If you’re looking for a surefire way to improve your story, you’ll be happy to know there’s a fast-acting method at your disposal. According to writing expert James Scott Bell, it’s “the fastest way to improve any manuscript.”

But here’s the thing—dialogue is more than just the words you put in your characters’ mouths. On screen and stage, it’s the actor’s job to take their lines and infuse them with meaning, expression, emotion, and so on. On the page, that’s your job.

Effective dialogue usually includes action, body language, subtext, and the thoughts, opinions, and emotions of the viewpoint character. It’s a powerful, dynamic device that, done right, will draw readers deep into your story.

Dialogue isn’t just window decoration. It must earn its place in the story by performing one or several crucial functions. There’s no room for boring chitchat or static bits of fluff in a compelling story.

“
There's no room for boring chitchat or static bits of fluff in a compelling story. Dialogue must earn its place.
Tweet this
Tweet

Here are seven important points in the job description for dialogue. A single passage of dialogue might not do all these things at once, but it should accomplish at least one:

Dialogue is a great way for characters to reveal themselves in the words they use and the way those words are delivered. Make sure you stay consistent within each character by using unique speech patterns, vernacular, and the lingo of each character's particular occupation or background.

When your POV character speaks, their thoughts, emotions, and opinions should carry the same flavor as their words, or provide an explanation to the reader as to why they don’t.

For example, consider the differences in character that are revealed in these three ways of saying the same thing:

“Fix me a sandwich, will you?”

“Get off your butt and make me a friggin sandwich.”

“I could really go for a sandwich, and no one makes them better than you. Would you mind?”

The conflict can be external—character vs. character or character vs. environment—or the dialogue can reflect the viewpoint character’s internal struggle. Conflict in dialogue can arise and escalate in many ways—through disagreement, threat, lies, wheedling, demands, cajoling, and taunting, to name a few—but don’t let it devolve into a tedious tug o’ war.

Here’s a short example from my thriller, Steadman’s Blind:

Frank hadn’t moved since Steadman left him to pursue the fleeing man, and he didn’t answer Steadman’s enthusiastic announcement. Dread, like a lead weight, sank in Steadman’s gut.

A tense moment passed, then a shaky voice rose out of the crevice. “I’m here.”

“What’s wrong, Frank? You told me you were okay.” Steadman couldn’t keep a note of accusation from creeping into his words.

Dialogue is a great way to send out prickles of suspense and to set up for later payoffs. Your characters can foreshadow future events by giving little hints that make the reader wonder, guess, and grow concerned about greater danger or conflict ahead. Use this technique in a moment of low tension to heighten and build, but don’t waste it on unimportant events.

“I have night’s cloak to hide me from their eyes,

And but thou love me, let them find me here.

My life were better ended by their hate

Than death proroguèd, wanting of thy love.”

Thereby laying the groundwork for peril and tragedy. Readers make a mental note and read on to discover how the foreshadowing will play out.

Here's another example from Alfred Hitchcock's film Psycho. When the Janet Leigh character checks into the Bates Motel, she witnesses a toxic argument between Norman Bates and his mother. He responds to her concern by explaining that “mother is as harmless as one of those stuffed birds.”

The scene sets up tension between characters and makes us suspect something lurks beneath the surface of their relationship. We’re hooked into watching further.

A passage of dialogue should produce a sense of movement, taking your characters farther from, or closer to, their respective goals. This often happens at the turning point of the scene, when information is revealed that changes the dynamic in a dramatic way.

In my thriller Nocturne In Ashes, I have a character desperately in need of a helicopter and pilot. This bit of dialogue advances the plot by moving him yet farther from his goal, upping the ante and the tension:

“He told me if anyone could get me there, it was Bobby Baines, and he gave me this address. I hope you don’t mind.” He snapped his empty glass down on the rosewood table at his elbow. “I’m afraid Bobby was my last hope.”

She swirled her drink, regarding its depths with a solemn eye, then shifted her gaze to his.

“You’re looking at a classic good news/bad news situation here. The good news is, I’m Bobbi Baines, and I am one hell of a pilot. The bad news is that the sort of operation you’re talking about, aside from the extreme peril, would tear up an engine, virtually killing the helicopter. No one wants to subject their bird to that.”

This reveal takes the character farther from his goal, but the next line of dialogue from Bobbi Baines changes everything, setting the storyline on a new trajectory. I won't spoil it for you. Read the book!

Do this by having your characters use words that convey the tone of your story. In their comments to one another, they make judgments about their surroundings, creating a picture in the reader’s mind and setting the mood.

Here’s an example from Ken Follett’s excellent novel The Key to Rebecca:

Ishmael was standing at his shoulder. He said: “Was it a long journey?”

“I had some camels when I started.”

Ishmael was awestruck: even the nomads did not make such long journeys, and he had never seen the sea.

*Fun fact—Did you notice those camels Achmed mentioned he had when he started? The opening line of The Key to Rebecca is one of the most famous ever, and it goes like this: “The last camel collapsed at noon.”

Don’t stop the action to make this happen. Keep the characters moving and weave the information into the action.

Elizabeth George calls this a THAD—Talking Heads Avoidance Device. Characters sitting static at a table is rife with difficulties for the writer. Make it easier on yourself and the reader by giving your characters something to do, and if you choose well, the activity can reveal more about the characters and theme.

As always, you must make sure the reader cares about your character before you dive into too much background. James Rollins gave a fantastic workshop on how to do that which I summed up in How to Write Action Scenes That Thrill Your Reader.

Be sure to include sensory details, filtered through your viewpoint character, as well as emotion, reaction, and opinion. And don’t be gratuitous with this, loading the dialogue with information the characters would already know. The reader picks up on such tactics and it feels artificial. Keep it real.

Some events in your story may take place behind the scenes, but the reader still needs to know what happened. Having your characters talk about the important elements of that offstage business is a valid and economical way to cover your bases.

Again, make certain the reader is invested in the outcomes and avoid using language that makes it feel like a report. Find fresh ways for your characters to talk to each other.

The Importance of Dialogue

I love writing dialogue. It’s fun, and the fact that it’s a power player in your writer’s toolbox is a fabulous bonus. Readers eat up white space. When there’s more dialogue and shorter paragraphs, it draws the eye and enhances the pace so it keeps readers turning those pages.

Study the techniques and put them to practice in your work. Make sure you learn the proper mechanics and organize your paragraphs correctly so there’s nothing impeding the flow of the dialogue.

Fire up your keyboard and put dialogue to work in your story today!

Can you think of other important roles dialogue plays in a story? Tell us about it in the comments.

Let’s write some dialogue! Choose one of the prompts and write a passage of dialogue between two characters, making sure the conversation accomplishes at least one of the purposes discussed in the article.

On a trans-Atlantic flight, Joan has the window seat and needs to get past Felix to use the bathroom.

In the supermarket, Brenda rushes to find all the items for her party, and her teenage daughter is more of a hindrance than a help.

In the woods, two men argue over the best way to start the campfire before the sun goes down.

Write for fifteen minutes. When you are finished, post your work in the practice box, and be sure to provide feedback for your fellow writers!