If you haven’t heard of them, the Write Practice’s seasonal writing contests are a great opportunity to get published and possibly win fame and (a small) fortune. 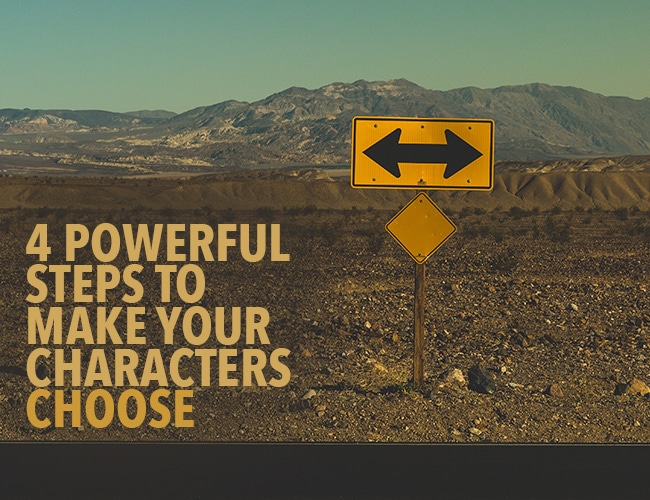 Perhaps you’ve entered before, but haven’t found the winner’s circle. Rejection is a familiar badge of honor amongst seasoned writers, but for many of us it can be tiring, and even tempt us to stop entering contests or submitting to publications.

But what if there was one thing you could change about your writing that could almost instantly make it better?

There is! There is a storytelling element that I’ve seen as an entrant and judge of multiple fiction contests that makes stories work and win, standing out above the rest.

And that single, difference-making element is a Powerful Choice.

When We Forget “Choice”

Unfortunately, this element isn’t as simple as it sounds. Characters yelling and screaming and fighting and kissing doesn’t necessarily count as a powerful choice. Sometimes it’s just noise, not a dilemma.

Other times writers fill their 1,500-word submission with lyrical prose and vivid imagery, but nothing happens. There are no dilemmas to be found. And though it always saddens me to do, as a judge I had to move on from such pieces.

Stories contains many elements that may be fun to write or read. But a story cannot possibly work without a powerful choice. It is central to any successful narrative.

In the same way, a house may be more valuable if it comes with marble countertops or vaulted ceilings. But without a solid foundation, the house is worthless, regardless of how aesthetically pleasing it may be.

In Aristotle’s Poetics, he defines dramatic tragedy as “the imitation of an action.” And while the stories you write are not all tragic, they are dramatic, in that they seek to create an impression of life.

In other words, they imitate life.

And when we imitate life, we are imitating the most basic act of life: a choice, or an action.

A story without a choice may be beautiful for its language or description. It may be memorable for any number of reasons.

But it won’t be remembered as a contest winner, because it will fail to do the most important storytelling job: To imitate the action of choice.

How to Imitate an Action

Imitating an action may seem like a simple chore. After all, “action” is a lot of fun to write, isn’t it?

But genuine choices aren’t just about the action or motion that takes place. Often most of the energy is potential — it’s in the build-up to the action.

And that is where you need to focus your storytelling energy, at least at first. Then, once your character has made his or her choice, you need to spend time on the fallout from this choice. Consequences are massively important to a well-told story, and your reader will want to know how a character’s choices play out.

So let’s look at the four steps to a powerful choice that will make your story a winner!

Before any choice is made, the protagonist must have a Desire.

Without desire, a choice doesn’t have any meaning. It is simply an item on a grocery list. And story desires can never be so trite and hope to win over a reader.

Then, the desire must be formed into a Goal, a stated or thought objective in the protagonist’s mind. If it isn’t clear to the protagonist — and therefore the reader — that this goal is the “Why?” behind everything he/she is doing in the story, then the story will be confusing and the reader will struggle to follow it, even if it makes sense to you.

So despite how “deep” we want our stories to be, two things must be abundantly clear: What the protagonist wants (Desire) and how he/she plans to get it (Goal).

The next step in a powerful choice is Resistance and Conflict, two forces that will make your protagonist’s goal interesting and worth reading about.

After all, if the object of desire (money, a lover, a new job, getting home, etc) is easily attainable, then it will fail to produce a story that your reader simply can’t put down.

So there must be a reason, or reasons, why the protagonist cannot achieve the goal and get what he/she wants right now. And those reasons must seem insurmountable.

The resistance and conflict can come from diverse places, too. The setting can push back. Family and society can dissuade and even forbid the protagonist from advancing. And a villainous antagonist (and his/her minions or servants) can make life hell for our hero along the way.

Without brutal resistance and difficult conflict, the protagonist cannot be faced with a tough dilemma and driven to the point of making a powerful choice. Devoid of this pushback, the choice would be easy, predictable, and obvious. That’s the last thing you want!

So make sure that the resistance and conflict push your protagonist as far as he/she can go without completely breaking.

Finally, the moment must come when the protagonist imitates the greatest action in all of humanity: the Choice with unimaginable consequences!

But it requires lots of set-up. It can’t be done without a relatable and clear Desire/Goal, or a highly antagonistic pairing of Resistance/Conflict.

To make the choice work, the hero can’t simply choose between an obvious “Yes” and equally apparent “No.” Choosing to kill the bad guy versus choosing to run away like a wimp isn’t really a dilemma.

And it will have your reader turning pages like lightning!

Shawne Coyne’s The Story Grid teaches about two types of crises that produce amazing moments of choice: The Best Bad Crisis, and the Irreconcilable Goods Crisis. The “bad guy is your brother” anecdote is an example of the “Best Bad Choice.”

Risky choices are just that because there’s almost always something to lose. There are few moments in life when everything turns out okay, and there are no negative consequences.

Which is why the fourth and final step is so important.

Readers want to know “What happens after …” your protagonist’s risky choice. And if they don’t get a satisfactory answer, they’ll leave your story feeling cheated and bitter.

This doesn’t mean you have to give them an ending that rivals Return of the King, but you need to make it clear exactly what the Consequences of the risky choice were.

You don’t have to tie up every single loose end the story may have — especially if you intend to pen a sequel! In fact, leaving one plot strand dangling while all the others are snugly knotted can be a great way to keep readers around, ready for your next release.

Make sure you thoroughly address how the action ends up, though. Because this, too, is a part of the imitation of an action. Every action has a reaction, and readers know it. They’ll be expecting it your story, too.

Whether you’re planning to enter the Spring Writing Contest or not (though you really should!), I hope that the value of a well-written action will be central to your stories.

Not only is it solid storytelling, but it’s exactly what readers want. And the best part is that this isn’t genre-specific. This is precisely the kind of journey that readers crave, whether they’ve picked up your Cowboy Romance novel or your Sci-Fi Horror short story collection.

So plan your next story with these four steps in mind. It’s time for action!

What’s the toughest choice you’ve ever made your characters make? Let us know in the comments.

Take fifteen minutes to plan a new story, or a rewrite of an existing story, listing how your protagonist will take the Four Steps of a Powerful Choice. Share your plan in the comments below, listing how your protagonist will form a Desire/Goal, face Resistance/Conflict, make a Risky Choice, and then suffer Consequences. Be sure to leave feedback for your fellow writers!