Dramatic Irony: A Great Literary Device That Adds Suspense to Your Story

Do you remember the first time you read Romeo and Juliet? Did you cringe when Romeo kills himself, knowing that Juliet is still alive? This is a perfect example of how to use dramatic irony in your story—a literary device that will inevitably add suspense to your novel. 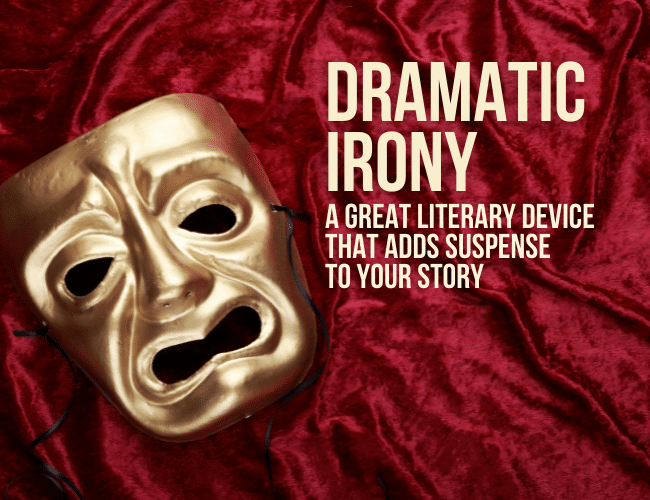 Dramatic irony can be used in any story regardless of genre, but it is especially useful when writing stories where you really want to increase tension and suspense.

In this article, you’ll learn about dramatic irony, another useful technique for keeping readers on the edge of their seats.

Irony is an excellent storytelling tool, but it’s a broad concept that covers multiple forms.

Verbal irony deals with the true meaning of a character’s words being the opposite of what they say.

Situational irony, on the other hand, sets up a pattern of cause-and-effect events that backfire. Your character misperceives a situation and acts on the basis of that misconception. As a result, the character experiences unanticipated consequences.

For example, in The Lion King, Simba believes he is responsible for King Mufasa’s death. Based on that mistaken idea, he banishes himself from the kingdom. In doing so, he leaves the kingdom in the tyrannical control of the one who really did kill the king—a tragic irony.

Both of these types of irony are great tools for story building, but today, I’d like to teach you about another type of irony—dramatic irony. You’ll learn what it is and how to weave this literary technique into your suspense stories.

Dramatic irony occurs when the reader is in a position of superior understanding, knowing more than the unwitting character does.

In the Romeo and Juliet example above, the reason we cringe as readers when Romeo kills himself is because we know something he doesn’t. Something that would change everything and bring a happy ending if he would only hang on long enough to discover it for himself.

But he doesn’t. And therein lies the rub.

How Do Stories Use Dramatic Irony?

Delivering information in the proper sequence of events is critical to telling a good story—that means knowing what information to deliver to the reader and when and how to reveal it.

In a “whodunit” type mystery, the POV character sometimes interprets clues a little ahead of the reader, creating curiosity and a desire in the reader to “catch up” and solve the mystery alongside the sleuth.

In some types of suspense fiction, the character and reader discover and understand information at the same time, virtually thinking through it together.

In cases of dramatic irony, the reader is a little ahead of the character, understanding something the character doesn’t. This can be a superb way to create nail-biting suspense.

For instance, let’s say you’re reading a psychological suspense novel, and you know the killer is the protagonist’s favorite uncle, but she doesn’t suspect him. Your superior knowledge pumps up the suspense in every scene involving the two of them because you see the danger she doesn’t.

“
Dramatic irony is a great way to add suspense to your story by giving information to readers that characters don’t have. Learn all about this literary technique in this article
Tweet this
Tweet

Dramatic Irony on the Page, Stage, and Screen

The immediate and clear example of dramatic irony is in every horror movie you’ve ever seen. We in the audience have been shown the serial killer waiting in the bushes or driving the car that stops for the hitchhiker. We scream, “No, don’t get in the car!” or “Get away from the bushes!”

We have more information than the character, allowing us to make predictions they can’t. That’s dramatic irony.

The stories we love are full of dramatic irony. It gets its name from the ancient Greek dramas in which it featured so prevalently.

For example, in the Sophocles play, Oedipus Rex, King Oedipus swears vengeance on the killer of the former king, Laius. We in the audience know that Oedipus himself is that killer, and we watch with tense excitement to see how he makes the discovery and resolves the dilemma.

Shakespeare made free use of dramatic irony in many of his plays. In Macbeth, the prophecy of the witches puts the audience in the know while poor Duncan remains ignorant, bestowing on Macbeth his absolute trust, which leads to his demise.

Viewers of The Hand That Rocks the Cradle know from the beginning that Peyton, the innocent-looking nanny, is really a poisonous schemer intent on destroying the family. This creates an incredible sense of tension and drives the story forward with viewers hanging on every moment to see what happens.

“
Shakespeare made use of dramatic irony in many of his plays. Other great writers looking to add suspense to their stories use it too!

See how stories use dramatic irony in this article.

The Truman Show is built around dramatic irony. Everyone except Truman himself is cued in to the fact that Truman’s whole life is on live television, the ultimate reality show. Viewers are able to attach significance to events that Truman can’t, allowing us to anticipate outcomes and wonder how Truman will react when he learns the truth.

In Poe’s story, The Cask of Amontillado, the reader is aware from the beginning that Montressor is luring his friend, Fortunato, to his death. The unfortunate Fortunato remains clueless until the end and readers hold on to discover the motive for such a dire act.

Where Does Dramatic Irony Come into Play?

Dramatic irony can kick in right from the start and continue through the whole story as it does in the examples above. Or it can feature in only part of the story.

In the first half of the movie, Sleeping With the Enemy, we see Laura’s relationship with her abusive husband and watch as she escapes him. During this part of the movie, Laura knows what we know and perhaps a little more. But toward the end of the movie, we see her husband’s movements as he learns her whereabouts and closes in to take his revenge, unbeknownst to Laura. This leads to some very skin-prickling scenes.

In Ira Levin’s suspenseful novel A Kiss Before Dying he waited until two-thirds of the way through the book before letting the reader know the killer’s identity. Readers devour the following pages as the insidious murderer burrows his way into the lives of the other characters who have no idea of the danger they’re in.

Giving readers more information than the protagonist possesses lets them get a little ahead of the character—making predictions and anticipating outcomes the character can’t.

In my thriller novel Nocturne In Ashes, I intersperse scenes through the eyes of the killer with scenes from other viewpoint characters. As the story progresses, this gives readers more information about impending dangers than Riley, my protagonist, has access to.

So when Riley gathers with friends and neighbors, readers know the villain is in the room and this heightens the tension. As Riley gets closer and closer to learning the truth, the danger and suspense increase, driving the story to its climactic conclusion.

Give Readers a Leg Up

Verbal irony and situational irony are great techniques to employ in your writing, but perhaps the best type of irony for promoting suspense is dramatic irony.

You accomplish dramatic irony in your writing by putting readers in a position of superior knowledge. Some of your characters may share the reader’s level of awareness—usually the villain—but other characters remain ignorant until the eagerly awaited moment of revelation.

This privileged position allows readers to actively anticipate events and turn pages quickly to discover how things play out. In some cases, this brings supreme satisfaction. In other cases, it means the reader must watch helplessly as events unfold to a tragic and inevitable conclusion.

Either way, it’s an emotional ride and readers read to feel something, to have their emotions stirred.

Add dramatic irony to your writer’s toolbox and use it when you want to give readers a leg up on your characters. It’s a great option for driving a story forward.

How about you? Do you like knowing more than the characters when you read? Tell us about it in the comments.

Let’s have some fun with dramatic irony. Remember the definition of irony. Using one of the prompts below, write a scene tipping readers to information one of the character’s doesn’t have. If your WIP contains dramatic irony, you may choose to write a scene from your current work in progress instead of using a prompt.

Write for fifteen minutes. When you are finished, post your work in the comments if you’d like to share. Don’t forget to provide feedback for your fellow writers!