Take It Easy With the Thesaurus 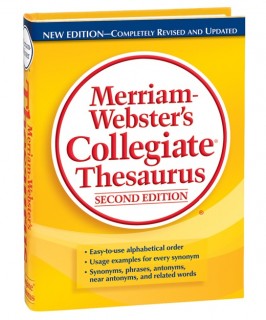 I've recently discovered that whenever I think something is great or fantastic, and it's worth commenting on how great or fantastic it is, I default to the exact same word in every conversation. It's “awesome”. Everything is awesome.

Using a Thesaurus Can Be Dangerous

Sometimes you might run across this problem in your writing. You find yourself using the same word or series of words over and over and over again, but not in a way that is intentional, or part of a repetition strategy. If this becomes a pattern, you want to make sure to expand your vocabulary and mix up your word choices. However, there is a right way and a wrong way to go about this.

The easiest way to find a new word for what you're trying to express is to go straight to a thesaurus (or Google, since real, bound thesauruses are practically extinct) and look up the word you're looking to replace. If you're opting for this mode of word replacement, be sure you're checking the connotation of your new word, because there is a world of difference between someone who is scrawny and someone who is slender.

If You Decide to Use a Thesaurus

Another thing that's important to know before you go picking every word out of the thesaurus is the formality of your storytelling. If you've adopted a casual writing style and throw slang words in the narration every couple pages, maybe it's not the best time to start using words that haven't been past your lips since your last high school vocabulary test. Similarly, if every other word in your prose has an extensive Latin or Greek origin, maybe “ain't” isn't the best choice of negatives for you. Match the word to the tone.

Lastly, make sure you consider the personality and background of the characters you're writing. The more educated a character is, the more extensive their vocabulary is likely to be, and children have a much more limited vocabulary than adults. A five-year-old isn't likely to use the word “vitriolic” in everyday conversation, and a neuroscience postdoc will probably come up with better words than “awesome” to describe something they approve of.

Keep in mind that sometimes using repetition in your word choice can be a good thing if you're trying to make a specific point or draw the reader's attention to something, but there's also a reason that so many people know the phrase “variety is the spice of life”.

Do you use a thesaurus in your writing?

Two potential exercises for you: one, take a thesaurus and pick a word, and then use as many synonyms for that word in your writing as possible. The other option is to pick a word and use it as many times as you can. Either way, after you've written for fifteen minutes, post your completed practice in the comments.

Need an alternative to the word “awesome.” Check out this FABULOUS (I really wanted to say awesome there) infographic.