The two best known of the basic plots are comedy and tragedy, These two basic plot types make up the two halves of the drama masks that represent classic theatre, and you can categorize most of Shakespeare's plays into one of the two. 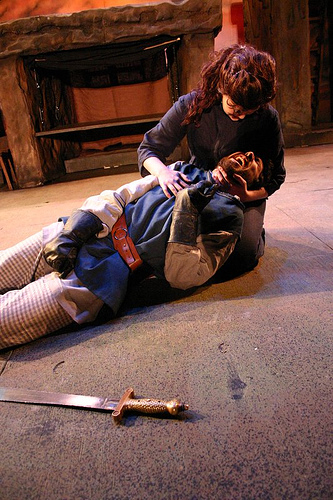 Everybody dies in Shakespeare's tragedies. Photo by Anthony Topper

In sixth grade English, when I was first exposed to Shakespeare, I was taught essentially that a tragedy is a play where everyone dies in the end. Clearly there's more depth than that, but you have to start small with eleven-year-olds.

In Booker's realm, a tragedy focuses on a villain protagonist, and the reader sees them delve further into darkness and evil before their ultimate death or destruction at the hands of the hero. His prime example is that of King Lear, in which the title character recognizes his error, but it's too late to repent by the time he figures it out, and he dies.

Here are the stages of a Tragedy:

The tragic hero gets it into his or her head that something is missing, and they want it. This might be power, fame, a specific love interest, or something else, but the protagonist has their motivation for the disaster dominoes that are about to fall.

The tragic hero sets out on their path to obtain their MacGuffin. Something occurs that tells the reader that this is a no-turning-back situation (Booker cites Faust's deal with the devil), and things start to go strangely well for the protagonist. He might be well on his way down the path of evil, but no one is calling him out on it, or no one can stop him, so he proceeds further into the depths.

Right about here is where the tragic hero hits his first roadblocks. They might be small annoyances, but in dealing with them, the protagonist commits additional dark acts that seal his fate and alert the reader that the only way this can end is badly.

The tragic hero's plan is unraveling, and he can sense that an opposing force or fate is closing in. He's increasingly paranoid and living in fear of what's to come.

Our protagonist breathes his last, whether at the hands of his enemies or due to some final act of violence. Either way, his death isn't mourned much, and the darkness that surrounded him dissipates, and there is much rejoicing.

In a way, Tragedy is a much more cynical version of the Rebirth, or the flip side of the Overcoming the Monster story, since most monsters follow this trajectory. Classic examples are Macbeth and Hamlet, and a lot of films about organized crime also follow this trajectory (Goodfellas, Scarface, The Departed).

Pick one of the stages of the Tragedy and write a scene from that stage for fifteen minutes. Post your practice in the comments section, and check out the work of your fellow writers.