How to Use Either, Neither, Or, and Nor Correctly

Recently, my mother emailed to ask if she was using the word “nor” correctly. (She seems to appreciate having a grammar lover in the family.) Which brings me to today’s article: the use of either, neither, and the connecting words that go with them. 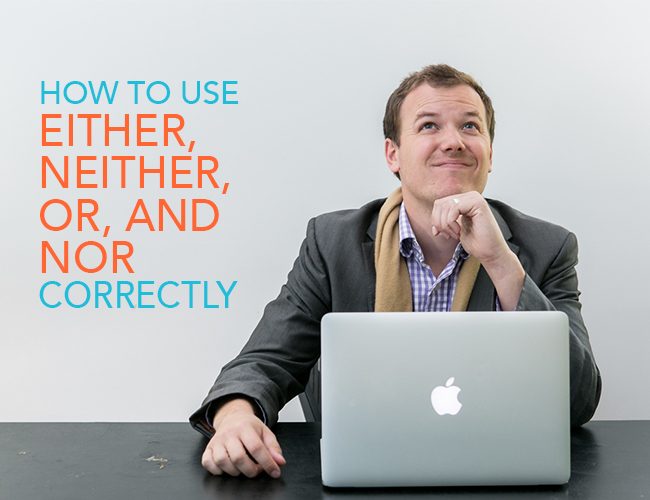 What is the correct usage of either and neither and what grammar tricks can we use to remember which one to use? Read on for a quick brush up on some language skills.

If you are using either and nor together, I hate to break it to you, but you’re doing it wrong.

Additionally, nor is generally not used where neither is not also used. Got enough negative terms in there for you? Here’s an example of what I mean:

“I fear man nor beast!” Jay proclaimed as Frank stared at the python coiled on the branch over his head. (Wrong.)

“I fear neither man nor beast!” Jay proclaimed as Frank stared at the python coiled on the branch over his head. (Right!)

Correct Use of Either

When either is used with or, it's called a correlative conjunction. (“Correlative” just means having a relationship and a conjunction is a connecting word.)

Either is used when you are making a comparison between two ideas, and only one of the ideas will come to pass. It expresses options. Example:

“Well,” said Frank, “either you start fearing, or you are camping by yourself.”

“
Use “either” and “or” when you're making a comparison between two ideas and only one of the ideas will come to pass.
Tweet this
Tweet

Correct Use of Neither

Neither indicates that the two ideas are linked together. Both ideas are false, or won't come to pass. It’s kind of like a negative conjunction.

But if you use neither, then make sure your sentence does not have any other negatives preceding it. If you prefer to use a negative, then you want to use either.

Take a look at these two sentences that both make the correct choice:

Jay had seen neither the snake nor the wasp’s nest on the next tree, and he was preparing to stake his tarp in that less-than-safe location.

Jay had not seen either the snake or the wasp’s nest on the next tree, and he was preparing to stake his tarp in that less-than-safe location.

Both of these sentences are correct, and you can choose which way you'd like to write them according to what you want to emphasize. The first sentence focuses on the two things Jay didn't see, while the second sentence chooses the negative “not seen” to emphasize Jay's lack of awareness.

“
Use “neither” and “nor” when you want to connect two ideas that are both false or won't come to pass.
Tweet this
Tweet

Use Either/Or and Neither/Nor With Confidence

You can choose to use either “neither/nor” or “either/or” wherever you need them. Just remember this quick trick:

“Either” and “or” both begin with vowels, so they go together.

And “neither” and “nor” both start with “n,” so they go together too.

With these examples and that memory trick, hopefully you will never see a stray “nor” again.

What do you find tricky about using either/or and neither/nor? Do you have any grammar tricks for remembering which to use? Tell us in the comments.

Need more grammar help? After you master “neither nor” and “either or” in the practice section below, check out my favorite tool, ProWritingAid, which helps writers improve their grammar, sentence structure, and more. Also, be sure to use my coupon code to get 20 percent off: WritePractice20

Not sure if it's the tool for you? Check out our ProWritingAid Review.

Tell us about a disastrous camping trip, even if it never happened. Use either/or and neither/nor to establish how much your characters would rather be anywhere but the Arctic tundra or Rocky Mountain wilderness or the Griswold family camping trip.

Write about your camping trip for fifteen minutes. Then, post your practice in the box below and leave feedback for other writers.