The Secret Cartel Behind Every Great Writer 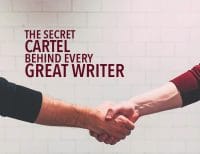 Have you ever felt that if you’re going to make it as a writer, it’s all up to you? That it's all on your shoulders to prove yourself and your talent? 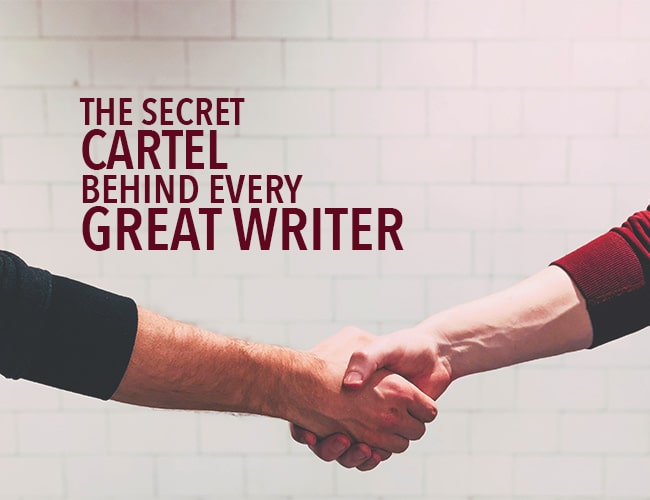 Perhaps you believe you have to hide yourself in some attic in Paris and write until you come out with a masterpiece, a book so good you can get discovered by some New York publisher who will make all your writing and publishing dreams come true?

Or maybe you believe that you will have to do all the work of publishing, all the printing, promotion, and marketing, all on your own.

Almost every writer I talk to, especially struggling writers, tells me, yes, they do feel like they're trying to meet their writing goals all alone. And this one belief is limiting the careers of so many writers (perhaps yours).

You don't have to go it alone. In fact, you'll be far more successful when you join a community of writers to work together. That's what you'll do in Foundations of Publishing, our platform and publishing course. Find out more here »

This is my story, too.

I used to believe that to be successful I had to live in some shack in Mexico and just write. When I thought of the stereotypical writer, I pictured a silent, brooding genius who keeps to themselves. A recluse who rarely ventures into the outside world except to “research” the lives of the subjects of his stories, an entire profession of Emily Dickinsons, pale and contemplative.

But the truth is that when I finally “made it,” when I finally became a full-time writer, got my first book published, and had 80,000 people read my writing in a single year, it didn't look like that at all.

In fact, I could never have done it on my own.

I have never written about this, but for a long time, I was a struggling writer with a bad blog only five people were reading. Fortunately for me, one of those people (besides my mom) was another writer, an author of two books.

I had started out as a reader of his blog first. After a few years of emailing, we became friends. He eventually mentored me.

Later he hired me for my first full time writing job and helped me find a writing coach, a former classmate who turned out to be a NY Times bestselling writer. He also introduced me to another writer he was mentoring, who edited my first book. That writer eventually became a Wall Street Journal bestselling author.

The truth is, that if I hadn’t met him, if I hadn’t asked for his help, I wouldn’t be writing to you right now.

There were many times that I wanted to quit as I built a career as a writer, as I did all of those dirty jobs, as I practiced the craft, and as I was generous but felt like no one was paying attention.

But I didn’t quit. I believed in myself. And more importantly, I had other people who believed in me. My mom. My writing mentors. Eventually my readers.

And what I learned through that process wasn’t how to be a genius author. It was that no one can do this on their own. Everyone needs a team. Everyone needs what I call a “cartel.”

What Is a Story Cartel?

A cartel sounds like a sinister thing, but the term just means this: an agreement amongst competitors.

You see, you and I could look at each other as competitors. We're both competing for the same, limited attention spans. We are both trying to get readers interested in our writing, trying to build a platform, and trying to sell our books.

We could look at the writing business like a zero sum game. If you win, that means I lose. If I win, that means you lose. I want to win, of course, so it's in my best interest to make sure you lose.

Writers act like this all the time, competing with each other for attention, resources, and praise. And honestly it's one of the biggest reason writers fail, because the truth is that's not a very good way to build a career as a writer.

A much better way is instead of acting like competitors, we could choose to act like allies. By helping each other, you and I can multiply our efforts. I give you access to my audience, you give me access to yours, and all of a sudden we've doubled our efforts.

As I’ve studied the great experienced writers of history, I’ve found that all of them had cartels.

From Ernest Hemingway to Virginia Woolf, J.R.R. Tolkien to Mary Shelley, nearly every famous writer had a group of writers who supported them and helped them build their career.

Don't believe me? Let's take a look at one writer whose Cartel changed everything for him: Ernest Hemingway.

The Secret Behind Ernest Hemingway's Success

Ernest Hemingway was far from a self-made man.

Early in his career as a reporter, Hemingway made friends with a novelist named Sherwood Anderson. Anderson took an interest in Hemingway, eventually helping him get his first novel published. It was Anderson who convinced Hemingway to visit Paris and participate in the artists' enclave popularized by the film Midnight in Paris.

In Paris, Hemingway met F. Scott Fitzgerald, who had just published The Great Gatsby. Hemingway had been writing short stories, but after reading The Great Gatsby, he realized that his next work had to be a novel.

Hemingway was also befriended by well-known writers in Paris, including James Joyce, Ezra Pound, and Gertrude Stein, writers who, as he said, “could help a young writer up the rungs of a career.” It was Gertrude Stein who first named their Cartel of expatriate artists “The Lost Generation,” a term Hemingway made popular in The Sun Also Rises, his first novel and the work that would make him internationally famous.

We think of great writers as silent, brooding geniuses, but the truth is they all had relationships like Hemingway had with F. Scott Fitzgerald and Gertrude Stein. These relationships inspired them and helped them get their first works published. Far from the exception, Hemingway's story is the rule. Great artists are made by Cartels.

The good news is that today, building a Cartel is easier than it ever has been.

You just need to know how.

As I've studied the lives of great writers, I've noticed a surprising pattern. They don't act like great writers.

However, I see so many new writers doing all of these. They criticize other writers. They don't read books by their peers. They may not ask for help, but they certainly don't offer it either. In other words, they act like narcissistic brats, and it's ruining their writing careers.

Hemingway did the opposite. In his memoir, A Moveable Feast, about living as a young writer in Paris, he talks about how he actively sought out the advice of other writers he knew. He read all their books. He offered to edit and compile Gertrude Stein's novel and basically single-handedly got it published (it would become The Making of Americans). He was generous, not selfish. He was vulnerable, not stuck up.

A Cartel doesn't have to exchange harsh criticism or go on extended writing retreats. It's a writing group that is committed to growing and supporting each other.

Seeking out your Cartel isn't safe.

It's much safer to write on your blog that no one reads. It's much easier to send your writing out to literary agents and publishers, and then criticize them when they reject you.

“
It's less scary to write in isolation, because what if they read your work and realize you're not a great writer after all?
Tweet this
Tweet

Creating a Cartel is dangerous, vulnerable work. It's also the fastest way to succeed as a writer. If you want to accomplish your writing dreams, maybe it's time to stop playing it safe.

Consider our very own J.D. Edwin, who just launched the second book in her Headspace series. She took the risk to become part of our community, to share her work, and to give feedback on the work of others.

Along the way, she learned what systems worked to help her accomplish her dreams. We've been cheering her on the last two weeks as she launched Master of the Arena, the prequel to Headspace.

Are You Ready to Find Your Cartel?

Building your Cartel is tough to do alone. That's why we created Foundations of Publishing, the online course that will help you build your platform, publish your writing, and best of all, connect with a Cartel of other writers.

The course is about the timeless way to thrive as author. This is about getting back to the foundation of what publishing, what the writing process is all about.

In the eight-week course, you’ll learn the proven process to connect with readers and influencers and live out your calling as a writer.

If you're ready to find your Cartel, this is the best way to get started. You can learn more about Foundations of Publishing here.

It's time to build your Cartel and publish your writing. You don't have to go it alone—join Write to Publish and get the guidance, support, tools, and encouragement you need.

How about you? Have you found your Cartel? Let us know in the comments.

Finding your Cartel starts through sharing your writing and giving feedback to other writers. Do you have a blog post, short story, or article you'd like to get feedback on? Share the link to your post or a (short!) section of your short story or novel in practice box below (750 words or less, please). Or set a timer for 15 minutes and write about your ideal Cartel.

Then, read the work of the other writers who shared and give your feedback. Try to mention two things you liked and one thing you didn't like about their piece.

Afterward, smile. You're one step closer to finding your Cartel.