Let’s say that you and your friends are watching a spy film. The hero is in restraints and staring down the business end of a laser gun that is threatening to fry off his face. The plucky sidekick is trapped in the middle of  a nearby lake, and the spy headquarters has no idea that the hero is even in Abu Dhabi because he was supposed to be in Bucharest, but got sidetracked by a lady.

It sure looks like the end for our hero. All of a sudden, a bright light beams down onto our hero, and he disappears, only to rematerialize on Mars. A man in white walks up to him, and says, “Welcome to the space headquarters of the Alliance’s spy network.”

Wait a minute. No one mentioned anything about the Alliance having a space headquarters. The entirety of this plot has been about kidnapping a biological engineer. There hasn’t been any mention of anything outside the Earth’s atmosphere in any context whatsoever. What just happened?

You’ve been blindsided by a deus ex machina. 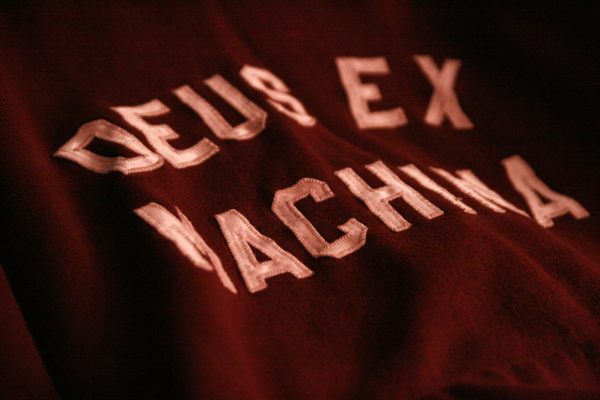 Deus ex machina is another fun Latin term that means “god from the machine,” and it refers to a plot snarl that is suddenly solved by the unexplained intervention of a completely new character or event. The phrase actually has its roots in Greek drama, where a crane would physically lower actors playing the gods onto the stage, usually to sweep up some mess the characters had gotten into.

There are a few requirements for a plot development to qualify as a deus ex machina.

A deus ex machina is also sudden. If the aforementioned Alliance space headquarters had been previously referenced, even in passing, then the rescue would not qualify as a deus ex machina.

Finally, a deus ex machina must fix an unsolvable problem. If there is a chance that common sense or ingenuity could solve the problem, then whatever solution swoops in is not a deus ex machina.

Deus ex machina tends to be frowned upon in the writing world, but it can be implemented well. It’s found all over Shakespeare’s works (especially the comedies), and, as mentioned above, it’s also in ancient Greek dramas. If nothing else, it’s been great for works of parody and comedy (see practically anything Monty Python or Mel Brooks has ever done).

Write for fifteen minutes, putting your main character in a seemingly inescapable dilemma, and then pull out a deus ex machina to get them out. Post your practice in the comments, and leave notes for your fellow writers.