What I’m Learning About Writing from Paris

Paris has always inspired writers. I've been here for a month, now, and I'm certainly not lacking in new ideas. However, you don't have to go to Paris to get the gift the city has to offer. Here's what I've learned about writing from living in Paris. 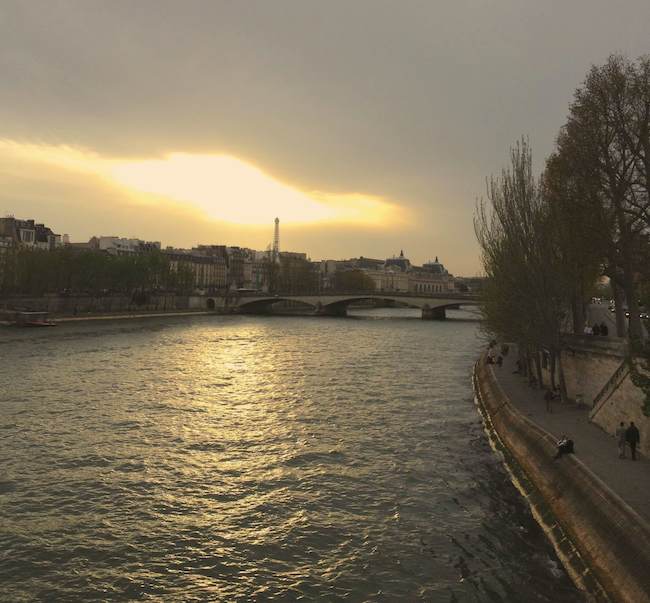 The Eiffel Tower across the Seine from my walk to the Louvre.

3 Lessons About Writing from Living in Paris

What is it about Paris that so inspires the artists and writers who live here?

This week I walked by the art supply store where Picasso used to buy his paints. Every day, I see the café, Les Deux Magots, where Jake met Brett in Ernest Hemingway's The Sun Also Rises. Earlier this month, I paid my respects to the grave of Oscar Wilde. When I walk to the Louvre, I pass by statue of Voltaire (he looks like Willem Defoe's creepy doppelganger).

Of course, Paris teaches thousands of lessons about art and writing to the people who have lived here, and it would be impossible to include them all in a simple blog post. But here are three major lessons that I'm learning from living in Paris.

In fact do everything slowly.

And as you slow down, look around you. People watching is Paris' preferred pastime. You sit in a café looking out to the street and watch the people around you, the people walking by, and, hopefully, the person sitting next to you, gazing into your eyes.

There's nothing better than this slow, watchfulness to stimulate your creativity.

2. The Ordinary Can Be Extraordinary

Somehow, in Paris, ordinary things like going shopping and walking down the street are extraordinary and inspiring. But perhaps Paris just awakens us to the truth, that the ordinary isn't actually ordinary at all.

We often think our lives are boring, that there's nothing unique about us. We think that instead of writing about our own little world we should create fantastic, imaginary places that will entertain our readers.

There's nothing wrong with fantasy, but I think we sell our lives short when we say our “ordinariness” isn't worthy of our writing. No one is living your life. No one has your stories to tell. Perhaps you just need to starting writing them down?

Of course, if your life really wouldn't make for a very good story, then maybe it's time to live more adventurously.

3. You Need a Cartel

After reading A Moveable Feast, Hemingway's memoir about living and writing in Paris, I realized Hemingway was always asking advice from mentors who were further along than him. Gertrude Stein, Ezra Pound, F. Scott Fitzgerald, these were Hemingway's friends and teachers. Is it any wonder he got so good?

Paris, in the 1920s, was this artistic oasis. All the serious, young, upstart writers and artists were here. They were able to help each other. Their ideas rubbed off on one another. They instructed and learned from each other. If you weren't in Paris in the 1920s, we probably aren't still talking about you today.

This is the power of Cartels, of tribes. They won't make your career for you. You still have to do the work, but it's very hard to be great without them.

In other words, it's not just the city that inspires. It's the people who live in the city.

Paris isn't the melting pot it was in the 1920s. It's wonderful and still inspiring, but it's too expensive to live here for the upstart, young artists to flock to. Where is that place today? I don't really know. Do you? Because I want to go there!

Have you been to Paris? What did you find inspiring about the City of Light?

You don't need Paris to learn how to write like you're in Paris. Go to a crowded place with a your journal or laptop. Spend a few hours people watching, writing about what you see.

Then, polish a few paragraphs of what you've written and post it into the comments section of this post. And if you share your practice, be sure to give feedback to a few other writers.