7 Keys to Write the Perfect First Line of a Novel 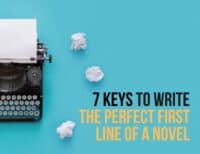 Earlier this week, I read “Poppies,” a short story by Ulrica Hume. Initially, I had only planned on skimming a few pages, but the first line hooked me. Before long, I was finishing the last page.

Great first lines have that power, the power to entice your reader enough that it would be unthinkable to set the book down. How, then, do you write the perfect first line? 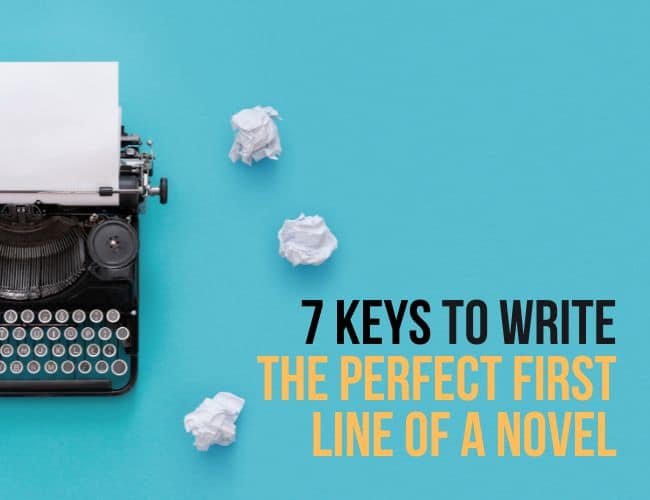 7 Qualities of the Perfect First Line

This post is about what makes memorable first lines great. We'll look at examples from some of the best books in history and try to apply their techniques to our stories.

Note that some of these lines are a bit longer than one sentence. Instead, I think of them as the first idea.

By the way, if you haven't already read Monica Clark's excellent post about writing the perfect first page, you should read it immediately.

Let's get started, shall we?

Here's the line from Ulrica Hume's “Poppies” that caught my attention.

I was born upside down, the umbilical cord looped twice around my neck.

It's a simple sentence, but I love it. “Born upside down.” There's something at once whimsical and perilous and messy about that image. Don't you instantly get a picture of the hospital room, the tiny baby, perhaps with a bit of hair, being held upside down by the doctor, still slightly blue and screaming?

Great first lines instantly invite us into an image.

Here's another vivid example from my favorite novel, All the Pretty Horses, by Cormac McCarthy:

The candleflame and the image of the candleflame caught in the pierglass twisted and righted when he entered the hall and again when he shut the door.

Isn't that a cool image? The light from a candle being reflected and twisted by a door. One of the reasons so many of Cormac McCarthy's novels have been adapted into films (e.g. All the Pretty Horses, No Country for Old Men, The Road) is that his writing is so cinematic, focusing on seemingly small details to invite us into the lives of his fascinating characters.

Great first lines, like the opening montage of a film, lead us into a scene. They use images, lighting, and tone to set the mood that the rest of the opening pages will take.

We like to hear stories from people who sound interesting and unique, and perfect first lines introduce the reader to a character's unique voice.

Voice is the peculiar vocabulary, tone, and phrasings our characters use. For example, here's a classic example of the first line from Catcher In the Rye by J.D. Salinger:

Notice how conversational this is. All the rules we were taught in school—don't use adverbs like really, don't use slang like lousy, and definitely don't use words like “crap”—Salinger breaks them. And it works because this isn't a school paper; this is one friend talking to another.

The remarkable thing about a unique voice is that it can be just as vivid as description. Don't you instantly get an image of a sarcastic, teenage kid (perhaps wearing a red hunting cap backwards) while reading this? Voice can spark your imagination to create whole worlds.

Mr. and Mrs. Dursley, of number four, Privet Drive, were proud to say that they were perfectly normal, thank you very much. They were the last people you'd expect to be involved in anything strange or mysterious, because they just didn't hold with such nonsense.

You can just hear the Dursleys saying that huffily, can't you? “Thank you very much. Such Nonsense.” I also think it's fascinating that for such a magical novel, Rowling chose to begin with the least magical people in the whole story, which just increases the contrast between the magic and “muggle” world. Brilliant.

Be surprising. So many of these examples of great first lines are surprising. Case in point, here's the opening line from 1984 by George Orwell:

It was a bright cold day in April, and the clocks were striking thirteen.

How do you quickly show the world you're describing is slightly off from the real world? Alter the way time is tracked. Genius.

Snakes are an easy way to surprise your reader. Here's the opening line from The Little Prince by Antoine de Saint-Exupéry:

Once when I was six years old I saw a magnificent picture in a book, called True Stories from Nature, about the primeval forest. It was a picture of a boa constrictor in the act of swallowing an animal. Here is a copy of the drawing.

Here's another example from One Hundred Years of Solitude by Gabriel García Márquez:

Many years later, as he faced the firing squad, Colonel Aureliano Buendía was to remember that distant afternoon when his father took him to discover ice.

Firing squad? Discovering ice? So much strangeness here I couldn't help but read on.

And in honor of Christmas, here's Charles Dickens' first line from A Christmas Carol (thanks Magic Violinist for the recommendation):

Marley was dead: to begin with.

Want to create surprise? Apparently you should begin your story with someone dying (as three of our examples do).

In a hole in the ground there lived a hobbit. Not a nasty, dirty, wet hole, filled with the ends of worms and an oozy smell, nor yet a dry, bare, sandy hole with nothing in it to sit down on or to eat: it was a hobbit-hole, and that means comfort.

“And that means comfort.” I love that part. I can imagine Tolkien's four children squealing with delight at this opening line.

And here is Jane Austen exhibiting her slyly satirical wit in the first line of Pride and Prejudice:

It is a truth universally acknowledged, that a single man in possession of a good fortune must be in want of a wife.

Of course he must. How could he not?

Some novels begin with a philosophical truth. Take the iconic first line of one of the bestselling books of all time, A Tale of Two Cities:

… and so on. It's quite long, so you can read the full line here. This line is so famous that when I first read A Tale of Two Cities I was surprised to realize it came from a book. By now, this line has become a truism, but in its day, it was a philosophical reflection on the subjectivity of history and human experience.

Great first lines can do that. They can take a look at an entire culture as a whole and You can't, of course, stay there forever. Eventually, you have start teaching again. But a little philosophy at the end of a novel doesn't hurt.

Many great first lines do little more than introduce us to the characters we're going to be following through the book. For example, from Melville's Moby Dick:

And here's a quick synopsis of The Lion, the Witch, and the Wardrobe in its first line:

Once there were four children whose names were Peter, Susan, Edmund and Lucy. This story is about something that happened to them when they were sent away from London during the war because of the air-raids.

Great first lines are often clear, we instantly know who the narrator is, where we are, and what this story  will be about.

7. Perfect First Lines Contain the Entirety of a Novel

Perfect first lines don't just begin a novel, they someone manage to compact the entire story into a single sentence.

For example, take Kafka's The Metamorphosis:

As Gregor Samsa awoke one morning from uneasy dreams he found himself transformed in his bed into a monstrous vermin.

You can see Samsa's entire journey, from the realization of his plight to his painful alienation to his eventual death.

Here's another example from Lolita by Vladimir Nabokov:

Lolita, light of my life, fire of my loins.

In this single, perfect sentence Nabokov reveals all the passion, poetry, and disaster that will follow.

Just as William Blake said, “To see the world in a grain of sand,” so the first line of a novel can contain its entirety within it.

How to Write the Perfect First Line

Be patient as you look for it. It might take longer than you think to find it. You may discover it, and then find another, then discard that one for something better still.

Remember, a great first line can hook your reader through the rest of your story. Keep searching for it. It's worth it.

Ready to write the rest of your novel? Check out our definitive guide, How to Write a Novel: The Complete Guide here.

What are your favorite first lines from novels? Let us know in the comments.

Take fifteen minutes to write the first line of a novel or short story.

You can write the first line of your work in progress or something new. Fifteen minutes is plenty of time, so write a few different versions focusing on different qualities from this article and see which version you like best.

When you're finished, post your lines in the practice box below. And after you post, be sure to give feedback to your fellow practitioners.