by The Magic Violinist | 0 comments

As a recovering pantser, outlining my novel is still somewhat new to me. I love doing it, because it helps me to know in what direction my novel is going so I can actually finish the first draft, but it can be hard to know how to go about doing it. 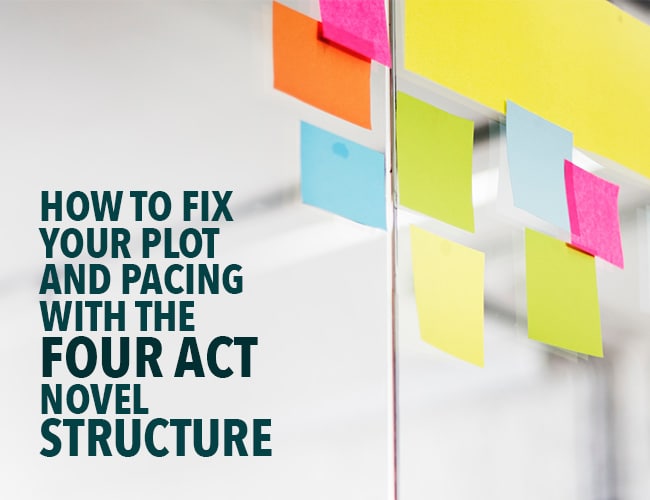 At what point do you reveal certain plot twists? How long should your middle actually be?

I recently went on a writing retreat with several other Young Adult writers, and Beth Revis helped each of us to fix the pacing and plot holes in our novels by using her four-act structure for a novel.

Some writing techniques aren’t for everybody, but as soon as she walked me through this outlining process, I was hooked. It gave me the perfect guideline for plotting all of my future novels. In fact, I used it to plot my NaNoWriMo novel for this year.

So let’s talk about the four-act novel structure and what some of the key points are in the outline to help you plan out your next book.

This is where you establish your protagonist’s everyday life. It doesn’t necessarily mean that your protagonist lives an ordinary life, but for them, this is their normal. This helps to show why the inciting incident is so meaningful, because it should change the protagonist’s direction considerably.

This section in your novel may last for an entire chapter, a page, or a paragraph. So long as it fits your story, you can play with the length.

There should be a moment in every novel where something significant happens to change everything.

For fantasy novels, this might look like the protagonist discovering the existence of magic. For contemporaries, it could be the arrival of a new kid at school or a new boss at work. It’ll definitely depend on what genre you write.

How has this change affected your protagonist? Their life should look different now. They should have new goals in sight, new priorities.

The point of no return

This being the end of Act One, Beth gave the suggestion that we try to make the “point of no return” happen somewhere around page fifty. (Keep in mind we were plotting Young Adult books, so the length may vary if you write adult or middle-grade.)

She suggested this because it becomes a mini-cliffhanger of sorts and when you send in page samples to an agent, you’ll want them to crave more of the story. Fifty pages is a common sample size, so this is a great place to end your first act.

Now that your protagonist is stuck on this new trajectory, they have to figure out how they’re going to achieve their goals. This is a great place to amp up the tension so there’s a bigger payoff later on.

If your book has a significant subplot, this is a good place to introduce that. Often times, in high-stakes fantasy or sci-fi stories, this might be where the romantic subplot comes in.

Of course, for romances where the romance is the heart of the plot, the subplot will be something different (maybe some family drama or tension between friends).

This is the end of your second act, so it needs to be something big. Consider the bombastic Broadway songs that often signal the end of the first act, leading to an intermission.

This is the point where the audience is so stunned or concerned or amazed that they need to let it all sink in. Think of this moment as the “extra special” inciting incident.

Similar to the beginning of Act Two, now that something has happened to change everything, your protagonist needs to regroup. It’s like the “everything’s different” point was a road closure and now they need to take a detour. What will they do to ensure they still achieve their goals?

This is another big moment in your novel and it has the potential to be emotional, too. The sacrifice can come from anyone: your protagonist, the best friend, a parent, the love interest, even your antagonist.

Sacrifices might look like the classic “one character jumps in front of another to save them from a bullet” or it could be as simple as one character giving up their hopes and dreams to help someone they love. The choice is yours.

At the end of your third act, you want a compelling “all is lost” situation. The couple breaks up. The antagonist is more powerful than ever. The apocalypse is coming.

Your reader should feel as hopeless as your protagonist. Everyone should wonder whether or not the good guys are actually going to make it in the end.

Again, if you’re writing a thriller, fantasy, sci-fi, or some other “big” genre, this could be a literal “die trying” moment. For romances and contemporaries, this might be where the protagonist makes some sort of grand gesture at the risk of looking silly or losing people close to them.

This is your climax, so go big or go home.

Your resolution can take many forms. Will you have a happy ending or a tragic one? Maybe it’s somewhere in between.

If you’re writing a series, your ending should take more of a cliffhanger approach. This is where you include your game changing plot twist that leads seamlessly into the sequel.

Whatever you do, your entire novel should have led to this moment to wrap up the story exactly as you planned to.

A Guideline, Not a Rule

While this outline should serve as a guideline for your story, don’t feel like you have to follow it exactly. There are many variations the four act novel structure can take. Halfway through writing your novel, you might realize that you want to take the story in a completely different direction.

Outlines aren’t set in stone. They’re something you can fall back on if you’re feeling lost.

Ultimately, though, you’re the author, so you’re in charge. Do what feels right for your story.

Do you outline your novels before writing them? Why or why not? Let us know in the comments.

Use the four-act novel structure to plan out your next big project. Even if you don’t end up using it, it’s a good practice when it comes to visualizing an entire story all at once. Try to keep your outline to two or three sentences for each moment. This should serve as a general overview, not an overly detailed outline.

Take fifteen minutes to plot your story. When you’re finished, share your outline in the comments. Don’t forget to give your fellow writers some love, too. Have fun!